Love and the Brain

Richard Schwartz and Jacqueline Olds know a lot about love. These Harvard Medical School (HMS) professors and couples therapists study how love evolves and, too often, how it collapses.

They have also been happily married for nearly four decades.

Love may well be one of the most studied, but least understood, behaviors. More than 20 years ago, the biological anthropologist Helen Fisher studied 166 societies and found evidence of romantic love—the kind that leaves one breathless and euphoric—in 147 of them. This ubiquity, said Schwartz, an HMS associate professor of psychiatry at McLean Hospital in Belmont, Mass., indicates that “there’s good reason to suspect that romantic love is kept alive by something basic to our biological nature.”

Rewarding ourselves with love

In 2005, Fisher led a research team that published a groundbreaking study that included the first functional MRI (fMRI) images of the brains of individuals in the throes of romantic love. Her team analyzed 2,500 brain scans of college students who viewed pictures of someone special to them and compared the scans to ones taken when the students looked at pictures of acquaintances. Photos of people they romantically loved caused the participants’ brains to become active in regions rich with dopamine, the so-called feel-good neurotransmitter. Two of the brain regions that showed activity in the fMRI scans were the caudate nucleus, a region associated with reward detection and expectation and the integration of sensory experiences into social behavior, and the ventral tegmental area, which is associated with pleasure, focused attention, and the motivation to pursue and acquire rewards.

The ventral tegmental area is part of what is known as the brain’s reward circuit, which, coincidentally, was discovered by Olds’s father, James, when she was 7 years old. This circuit is considered to be a primitive neural network, meaning it is evolutionarily old; it links with the nucleus accumbens. Some of the other structures that contribute to the reward circuit—the amygdala, the hippocampus, and the prefrontal cortex—are exceptionally sensitive to (and reinforcing of) behavior that induces pleasure, such as sex, food consumption, and drug use.

“We know that primitive areas of the brain are involved in romantic love,” said Olds, an HMS associate professor of psychiatry at Boston’s Massachusetts General Hospital, “and that these areas light up on brain scans when talking about a loved one. These areas can stay lit up for a long time for some couples.”

When we are falling in love, chemicals associated with the reward circuit flood our brain, producing a variety of physical and emotional responses—racing hearts, sweaty palms, flushed cheeks, feelings of passion and anxiety. Levels of the stress hormone cortisol increase during the initial phase of romantic love, marshaling our bodies to cope with the “crisis” at hand. As cortisol levels rise, levels of the neurotransmitter serotonin become depleted. Low levels of serotonin precipitate what Schwartz described as the “intrusive, maddeningly preoccupying thoughts, hopes, terrors of early love”—the obsessive-compulsive behaviors associated with infatuation.

Being love-struck also releases high levels of dopamine, a chemical that “gets the reward system going,” said Olds. Dopamine activates the reward circuit, helping to make love a pleasurable experience similar to the euphoria associated with use of cocaine or alcohol. Scientific evidence for this similarity can be found in many studies, including one conducted at the University of California, San Francisco, and published in 2012 in Science. That study reported that male fruit flies that were sexually rejected drank four times as much alcohol as fruit flies that mated with female fruit flies. “Same reward center,” said Schwartz, “different way to get there.”

Other chemicals at work during romantic love are oxytocin and vasopressin, hormones that have roles in pregnancy, nursing, and mother-infant attachment. Released during sex and heightened by skin-to-skin contact, oxytocin deepens feelings of attachment and makes couples feel closer to one another after having sex. Oxytocin, known also as the love hormone, provokes feelings of contentment, calmness, and security, which are often associated with mate bonding. Vasopressin is linked to behavior that produces long-term, monogamous relationships. The differences in behavior associated with the actions of the two hormones may explain why passionate love fades as attachment grows.

In addition to the positive feelings romance brings, love also deactivates the neural pathway responsible for negative emotions, such as fear and social judgment. These positive and negative feelings involve two neurological pathways. The one linked with positive emotions connects the prefrontal cortex to the nucleus accumbens, while the other, which is linked with negative emotions, connects the nucleus accumbens to the amygdala. When we are engaged in romantic love, the neural machinery responsible for making critical assessments of other people, including assessments of those with whom we are romantically involved, shuts down. “That’s the neural basis for the ancient wisdom ‘love is blind’,” said Schwartz.

When we are falling in love, chemicals associated with the reward circuit flood our brain, producing a variety of physical and emotional responses—racing hearts, sweaty palms, flushed cheeks, feelings of passion and anxiety. 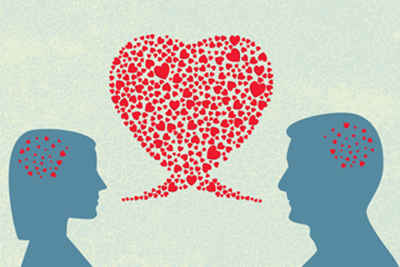 If love lasts, this rollercoaster of emotions, and, sometimes, angst, calms within one or two years, said Schwartz. “The passion is still there, but the stress of it is gone,” he added. Cortisol and serotonin levels return to normal. Love, which began as a stressor (to our brains and bodies, at least), becomes a buffer against stress. Brain areas associated with reward and pleasure are still activated as loving relationships proceed, but the constant craving and desire that are inherent in romantic love often lessen.

Many theories of love, said Schwartz and Olds, propose that there is an inevitable change over time from passionate love to what is typically called compassionate love—love that is deep but not as euphoric as that experienced during the early stages of romance. That does not, however, mean that the spark of romance is quenched for long-married couples.

A 2011 study conducted at Stony Brook University in New York state found that it is possible to be madly in love with someone after decades of marriage. The research team, which included Fisher, performed MRI scans on couples who had been married an average of 21 years. They found the same intensity of activity in dopamine-rich areas of the brains as found in the brains of couples who were newly in love. The study suggested that the excitement of romance can remain while the apprehension is lost.

“A state-of-the-art investigation of love has confirmed for the very first time that people are not lying when they say that after 10 to 30 years of marriage they are still madly in love with their partners,” said Schwartz. In the Stony Brook study, he added, the MRI scans showed that the pattern of activity in the participants’ dopamine reward systems was the same as that detected in the brains of participants in early-stage romantic love.

For those whose long-term marriage has transitioned from passionate, romantic love to a more compassionate, routine type of love, Olds indicated it is possible to rekindle the flame that characterized the relationship’s early days. “We call it the rustiness phenomenon,” she said. “Couples get out of the habit of sex, of being incredibly in love, and often for good reasons: work, children, a sick parent. But that type of love can be reignited.” Sexual activity, for example, can increase oxytocin levels and activate the brain’s reward circuit, making couples desire each other more.

That alone, she said, may be enough to bring some couples back to those earlier, exhilarating days, when all they could think about was their newfound love.