Nightmares and the Brain

In the late 1700s, a nightmare was defined as a “disease when a man in his sleep supposes he has a great weight laying upon him.”

This definition came from the popular reference text, An Universal Etymological English Dictionary, first published by Nathan Bailey in 1721 and reprinted through 1802. Although that definition doesn’t surface often today, nightmares are still considered to be frightening dreams that result in feelings of terror, fear, distress, or anxiety.

Despite our colloquial use of the term, for example, “my commute was a nightmare,” for an estimated 3 to 7 percent of the U.S. population, nightmares can be a real problem. Although adults can suffer from nightmares, they are more typical in children, especially those between the ages of 3 and 6. “We think that some of this may be evolutionary,” says Deirdre Barrett, PhD, an HMS assistant clinical professor of psychology at Cambridge Health Alliance and editor of “Trauma and Dreams,” published by Harvard University Press in 2001. “Children are smaller and are vulnerable to many more threats than adults. Nightmares may partially reflect this vulnerability.”

Dreams are understood to be recent autobiographical episodes that become woven with past memories to create a new memory that can be referenced later, but nightmares are simply dreams that cause a strong but unpleasant emotional response. Dreams are part of the brain’s default network—a system of interconnected regions, which includes the thalamus, medial prefrontal cortex, and posterior cingulate cortex—that remains active during comparatively quiet periods.

REM sleep is one example of a quiet period. It is a stage of sleep that is characterized by rapid eye movement, irregular heartbeat, and increased rates of respiration. REM sleep is discontinuous, chunked into four or five periods that together make up about 20 percent of our slumber. It is during these REM episodes that brain structures in the default network exert influence, and it is during REM sleep that vividly recalled dreams occur most often.

Nightmares tend to happen during the period of sleep when REM intervals lengthen; these usually occur halfway through slumber. As we prepare to awaken, memories begin to integrate and consolidate. We dream as we emerge from REM sleep. Because we tend to dream on the sleep-wake cusp, images imagined while dreaming, including the vivid, often terrifying images produced during nightmares, are remembered. 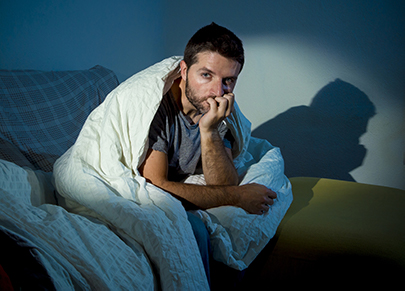 Nightmares are often confused with night terrors, a phenomenon more likely experienced by children than adults and usually more dramatic than a nightmare. Night terrors are not technically dreams but are instead sudden fearful reactions that occur during transitions from one sleep phase to another. They typically occur two to three hours after sleep begins, when deep non-REM sleep transitions to REM sleep. Night terrors often cause children to kick, scream, and thrash about, but, because night terrors do not occur during REM sleep, most children do not remember them.

“Night terrors are a phenomenon of the deepest parts of non-REM sleep, when the brain is less active,” says Barrett. “In a night terror, a child awakens with heart pounding. There is, however, either no content to the feeling of terror or there is a simple scary image. There is not, however, the sort of narrative story you experience with dreams, including nightmares.”

John Winkelman, AM ’83, MD ’87, PhD ’83, an HMS associate professor of psychiatry who studies sleep disorders at Massachusetts General Hospital, says night terrors are often forgotten the next day because they arise during what is known as short-wave sleep, a time when neurons in the neocortex, the brain’s center for higher mental functions, are less active.

Nightmares can arise for a number of reasons—stress, anxiety, irregular sleep, medications, mental health disorders—but perhaps the most studied cause is post-traumatic stress disorder (PTSD).

Nightmares can arise for a number of reasons—stress, anxiety, irregular sleep, medications, mental health disorders—but perhaps the most studied cause is post-traumatic stress disorder (PTSD). Nightmares are a common complaint among people suffering from PTSD and, in fact, are one of the criteria used for the diagnosis of the disorder. A University of Pittsburgh School of Medicine study, published in 2009 in "Sleep Medicine Clinics," found that 80 percent of people experiencing PTSD have frequent nightmares. A 1998 study that analyzed data from the National Vietnam Veterans Readjustment Study found that regular nightmares were reported by 52 percent of combat veterans but only by 3 percent of civilian participants. Not only are nightmares more common in those with PTSD, they are more frequent, sometimes occurring several times a week.

Post-traumatic nightmares often involve elements similar to the trauma itself, according to the National Center for PTSD of the U.S. Department of Veterans Affairs. About half of the people who have nightmares after a traumatic event have nightmares that replay the trauma. Those with PTSD are much more likely to have exact replays of their trauma.

Barrett says that in post-traumatic nightmares, the region of the brain involved in fear behaviors, including the amygdala, a structure deep in the brain that works to identify potential threats, may be overactive or overly sensitive. “Post-traumatic nightmares,” she adds, “are probably not completely different from daytime flashbacks and general daytime anxiety that those experiencing the nightmares are having.”

People who are deeply affected by nightmares can be treated in a variety of ways. First, the cause of the stress, if there is one, must be determined. If a stressor is identified, effective ways to manage it should be found. For medication-induced nightmares, dosages might need to be altered or different drugs administered. People with post-traumatic or chronic nightmares can be treated with psychological therapy or with medication.

Psychological therapy for nightmares is called image rehearsal therapy, or IRT. In this form of cognitive therapy, individuals, especially those who repeatedly experience a given type of nightmare, are asked to recall and write down their nightmares, then asked to rewrite the nightmare and give it a positive ending. The individual then rehearses the rewritten version before going to sleep with the aim of displacing the unwanted content during sleep. IRT has been investigated in a number of studies, says Winkelman, and found to reduce nightmare frequency and distress.

A study published in 2003 in the "American Journal of Psychiatry" reported that the drug prazosin could help relieve nightmares in people with PTSD. The drug, traditionally used to treat hypertension, reduced the level of neurochemicals in pathways that become overstimulated in PTSD.