Delirium, Dementia, and the Brain

The scenario is distressing: Your elderly parent is hospitalized and becomes confused, withdrawn, anxious, and not himself.

He may very well have delirium, a sudden change in mental status that is common, serious, and costly—and often goes unrecognized. With proper attention, however, many cases of delirium can be prevented. “Delirium comes on acutely. Someone can be OK one day and totally out of it the next day,” says HMS Professor of Medicine Sharon Inouye, MD, MPH, of Beth Israel Deaconess Medical Center. An internationally known expert on delirium, she is also the Milton and Shirley F. Levy Family Chair and director of the Aging Brain Center at the Hinda and Arthur Marcus Institute for Aging Research at Hebrew SeniorLife.

Delirium affects up to half of all hospitalized seniors—including at least 70 percent of those treated in the intensive care unit—and 20 to 60 percent of nursing home patients. Inouye developed the widely used Confusion Assessment Method (CAM) about 30 years ago to help clinicians diagnose delirium, which typically is brought on by multiple factors—for example, underlying dementia plus a trigger such as an infection, surgery pain, certain medications, or simply being in a hospital’s disorienting environment.

Although delirium may clear within days or weeks with proper management, and most people fully recover, research shows it can have long-lasting complications. According to Inouye, hospital and post-hospital expenses tied to delirium total more than $150 billion a year in the U.S.

The good news, says Inouye, is that there are very good strategies in place to prevent delirium. “We could today prevent over half of delirium cases from occurring,” she says. Inouye and colleagues developed the evidence-based Hospital Elder Life Program (HELP), now used by over 200 hospitals worldwide. Prevention strategies include treating a precipitating illness; making sure the person moves, eats, drinks, and sleeps enough; and providing hearing aids and glasses (see delirium checklist on the right).

Delirium comes on acutely. Someone can be OK one day and totally out of it the next day.

Delirium and dementia can share similar symptoms, such as confusion, agitation, and delusions, but they are different. While delirium starts suddenly and can change dramatically over the course of a day, dementia generally worsens slowly over months and years. However, the conditions often occur together. 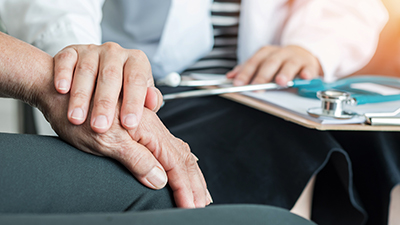 Patients with dementia are at risk for developing delirium in the hospital, and if they do become delirious, they are likely to have swifter cognitive decline, says Inouye. She is studying how this happens—for example, whether delirium sets off brain changes that can trigger or accelerate dementia—as principal investigator of the Successful Aging after Elective Surgery (SAGES) study, funded by the National Institute on Aging. The team, which includes Edward Marcantonio, AB ’83, MD ’87, SM ’92, HMS professor of medicine at Beth Israel Deaconess Medical Center, and other HMS collaborators, is examining inflammatory biomarkers and other basic mechanisms of delirium it hopes will lead to effective treatments. The scientists are also examining neuroimaging, electrophysiological, and other biomarkers with colleagues from throughout the Harvard community.

The SAGES goal is years away, and Inouye says she wants to change things now. Her fascination with delirium began shortly after medical school, when she observed geriatric unit patients becoming acutely confused and was told not to worry. “That didn’t sit well with me,” she recalls.

Inouye is working to heighten delirium awareness among families, trainees, and providers across the health system. She considers delirium a key barometer of health for older adults, the way a high fever signals sickness in children. “Often, a family member will come in and say, ‘My father is not himself.’ Whenever you hear those words, you must think delirium. That is the barometer that something is very wrong, and you have to take that extremely seriously.”

What to look for

What clinicians and families can do

Any sudden change in a person’s thinking, mood, or behavior should be reported immediately to a medical professional. A cognitive and physical evaluation to identify and then treat the underlying cause/s should follow. There is no effective drug treatment for delirium; in fact, Inouye says, many medications make it worse. But there are many non-drug strategies for managing and preventing delirium, among them: