Holiday Stress and the Brain

“It’s the most wonderful time of the year . . . It’s the hap-happiest season of all.” So says a classic song of the holiday season. But is it?

The end-of-year holidays are certainly a happy time for most of us, but the stress of the season puts many of us on such an edge that we wish it would all just go away.

“The holidays are filled with both joy and stress,” says Ellen Braaten, PhD, an HMS associate professor of psychology at Massachusetts General Hospital and associate director of its Clay Center for Young Healthy Minds.

This dichotomy is reflected in the findings of a 2015 survey conducted by Healthline, a consumer health information site based in San Francisco, Calif. Sixty-two percent of respondents described their stress level as “very or somewhat” elevated during the holidays, while only 10 percent reported no stress during the season. Among the holiday stressors listed by respondents were the financial demands of the season, negotiating the interpersonal dynamics of family, and maintaining personal health habits such as an exercise regimen. 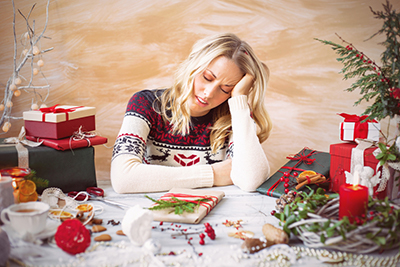 Readying ourselves to face these stresses requires what Braaten and other professionals refer to as shifting set, that is, updating or shifting cognitive strategies to respond to the changes in our environment. “The tough part,” says Braaten, “is that shifting set, which can be hard for us at any point in the year, is particularly pervasive at the holidays.” For such updates to be successful, one must have the cognitive flexibility to shift attention between one task and another and to rapidly adapt to changing circumstances.

Shifting set is a type of executive functioning, a set of mental skills that helps us get things done. These skills include managing time, being attentive, switching focus, planning and organizing, and remembering details. Many of us perform these activities daily but, according to Braaten, they are behaviors that are in even greater demand during the holiday season.

Because the holiday season often requires us to keep track of and pay attention to a greater number of responsibilities than usual, the brain’s prefrontal cortex goes into overdrive. Over time, a high level of demand can decrease memory, halt production of new brain cells, and cause existing brain cells to die. Fortunately, holiday stress is a special kind of stress: an acute reaction to an immediate threat. This sort of demand, Braaten says, is something we are more capable of dealing with. “Once the holidays are over,” she says, “we have ways of relaxing. The stress of the season goes away.”

Braaten says people who feel stressed during the holidays should evaluate how they spend their time, decide what they want the holidays to mean to them, and keep their expectations for the season realistic.

“The holidays are just another time of year,” notes Braaten, “certainly something to mark, but not the end-all, be-all.”