Fly-Fishing and the Brain

In the mid-nineteenth century, the avid fly-fisherman and physician James A. Hensall, MD, elucidated what for many is the allure of that often solitary form of angling.

“Fly-fishers,” he said, “are usually brain-workers in society. Along the banks of purling streams, beneath the shadows of umbrageous trees, or in the secluded nooks of charming lakes, they have ever been found, drinking deep of the invigorating forces of nature—giving rest and tone to over-taxed brains and wearied nerves—while gracefully wielding the supple rod, the invisible leader, and the fairylike fly.”

What is it about this so-called quiet sport, with its incantation of rod and fly, river, and nature, a sport of both stealth and strategy, that helps to lessen stress and calm the brain? Herbert Benson, MD '61, the Mind Body Medicine Professor of Medicine at HMS and director emeritus of the Benson-Henry Institute at Massachusetts General Hospital, says humankind has learned over millennia how to turn off stress by “breaking the train of everyday thinking.”

“What better example of this than fly-fishing,” says Benson, “with the repetitive back-and-forth motion of the rod and line and fly? You’re focusing on where that fly is going to land on the water and that breaks the train of everyday thought.”

Many fishing historians credit the first use of an artificial fly for fishing to Macedonian fisherman whose technique was described by Claudius Aelianus, a Roman author, in one of his works produced near the end of the second century: “They throw their snare, and the 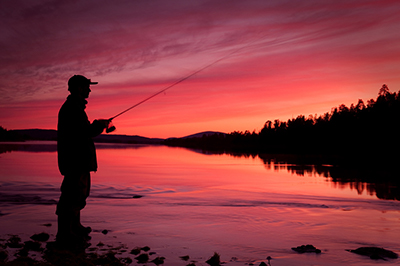 fish, attracted and maddened by the color, comes straight at it, thinking from the pretty sight to gain a dainty mouthful; when, however, it opens its jaw, it is caught by the hook, and enjoys a bitter repast, a captive.”

Today, in the United States, more than 38 million people participate in the sport annually, mostly on cold-water rivers, streams, lakes, and ponds west of the Mississippi River.

The Recreational Boating and Fishing Foundation and the Outdoor Foundation reports that among the people in this country hope to take up fly-fishing and other forms of angling, 38 percent say they see fishing as a means to relax and relieve stress. Many of these prospective anglers think the soothing sound of flowing water and the pull of a fishing line would be enough to drive their stress away.

That stress response is triggered when we perceive threats to our well-being. This protective mechanism has given humans an edge when faced with a life-threatening situations throughout the millennia. Although we don’t face some of the dangers of yesteryear, such as being chronically vulnerable to death or injury, the modern stressful situations of unemployment, financial distress, divorce, or chronic illness, can also be permanently damaging.

When our brain senses danger, it sends signals along the spinal nerves to the adrenal glands, prompting the adrenals to release the hormone adrenaline, which helps activate the fight-or-flight response by affecting certain physiological processes, such as by initiating increases heart rate and blood pressure. At the same time, the hypothalamus signals the pituitary gland, located near the base of the brain, to release substances that travel through the bloodstream to the adrenal cortex, where a stress hormone called cortisol is produced.

This process is a perfect stopgap measure for dealing with short-term stress, says Benson, but experiencing stress on a prolonged basis can damage our brains and bodies. If cortisol levels remain too high for too long, the immune system can be harmed, increasing our susceptibility to infection and illness and decreasing the number of brain cells, impairing memory and other neural functions.

When our brain senses danger, it sends signals along the spinal nerves to the adrenal glands, prompting the adrenals to release the hormone adrenaline, which helps activate the fight-or-flight response by affecting certain physiological processes, such as by initiating increases heart rate and blood pressure.

A 2008 study by the Benson-Henry Institute, published in the Journal of Alternative and Complementary Medicine, found that more than half of the study participants who practiced the relaxation response experienced a drop in blood pressure values after eight weeks, and 50 percent of those who practiced the technique were able to have their dosages of blood pressure medication lowered. With its meditative-like repetitive motion, Benson says fly-fishing is a “beautiful way” of evoking the relaxation response.

The Recreational Boating and Fishing Foundation describes fly-fishing as a natural stress reliever because fly anglers are surrounded by nature, unplugged from electronics, and distanced from the so-called real world. That notion is buttressed by a 2009 study by a team of researchers drawn from the University of Southern Maine, the University of Utah, and the VA in Salt Lake City. In their study involving combat veterans found that participants had significant reductions in stress and post-traumatic stress disorder symptoms and improvements in sleep quality after participating in a fly-fishing retreat.

In other ways, fly-fishing has been compared to meditation, in that fly-fishers perform a simple, repeated task, often for hours on end. “The motion of fly-fishing is part and parcel of the activity itself and may contribute to its calming effect,” says Benson. “Besides, it’s achieving something—you might catch a fish!”