Hunger and the Brain

Bradford Lowell, MD, PhD, remembers his astonishment the first time his lab “turned on” hunger-promoting neurons in a mouse.

The genetically engineered rodent, which was already full, devoured food pellets as if it hadn’t eaten anything all day, quelling any doubts about the neurons’ importance.“I recall thinking it was the most amazing thing I had ever seen,” says Lowell, an HMS professor of medicine at Beth Israel Deaconess Medical Center (BIDMC).

That 2011 feeding frenzy was a turning point in Lowell’s decades-long quest to understand how the intense drive of hunger compels us to eat—and makes dieting so difficult. It is one of many “wow” moments he has encountered while decoding the incredibly complex tangle of circuits in the brain that control appetite.

To illuminate how the system works, Lowell and his colleagues are assembling a “parts list” of hunger-related neurons and the genes they express, as well as a “wiring diagram” of how these neurons communicate with each other and with higher structures in the brain. Lowell hopes that finding the missing pieces of both maps will lead to treatments for obesity or eating disorders.

“Once we know what all the key neuronal steps are, and we know all the genes that each neuron expresses, we can say, ‘What’s our drug target in there?’” Lowell says. 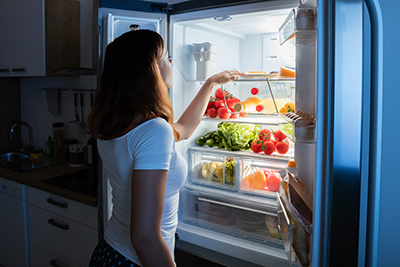 Much of his research focuses on agouti-related peptide (AgRP) neurons, nerve cells in the hypothalamus at the base of the brain that are activated by fasting. Lowell’s group, along with others, discovered that these neurons suppress other neurons responsible for feelings of satiety, which in turn triggers a desire to eat. Mice will poke their noses for pellets 30 times in a row to relieve hunger pangs; even a sated mouse will poke 30 times if its hunger neurons are artificially turned on.

“These drive neurons cause a bad feeling, and you eat to get rid of the bad feeling,” he says. “That is why dieting fails, because you have to constantly walk around not feeling well.”

In a surprising finding, Lowell’s lab, collaborating with Mark Andermann, PhD ’06, an HMS associate professor of medicine at BIDMC, found that when a mouse merely looks at food, its hunger neurons change their response. “What that means is that sensory cues from the environment that are being processed by the cortex are coming down to regulate hunger neurons to help guide them in deciding if/when to eat,” Lowell explains. This counters earlier thinking that feedback from the body (e.g., about low fuel reserves) alone controlled these nerve cells. He adds, “The fact that cortically processed information controls AgRP hunger neurons likely also has implications for the cause of feeding disorders like anorexia nervosa.”

Incredible changes have taken place since Lowell began studying hunger and metabolism in college in the late 1970s. That was well before the advent of genetically encoded tools that have transformed brain science by allowing investigators to manipulate, measure, and map the connectivity of specific neurons and watch how their activity affects behavior.

Lowell’s lab is a leader in producing and sharing lines of genetically engineered mice with researchers worldwide—who, in turn, have published numerous papers. “So the making of these key ‘enabling’ mice has had a significant impact on neuroscience,” he says. With technology helping elucidate neural behavior in ways that were previously impossible, “I think the future for understanding deeply how the brain controls drives like hunger is very promising.”