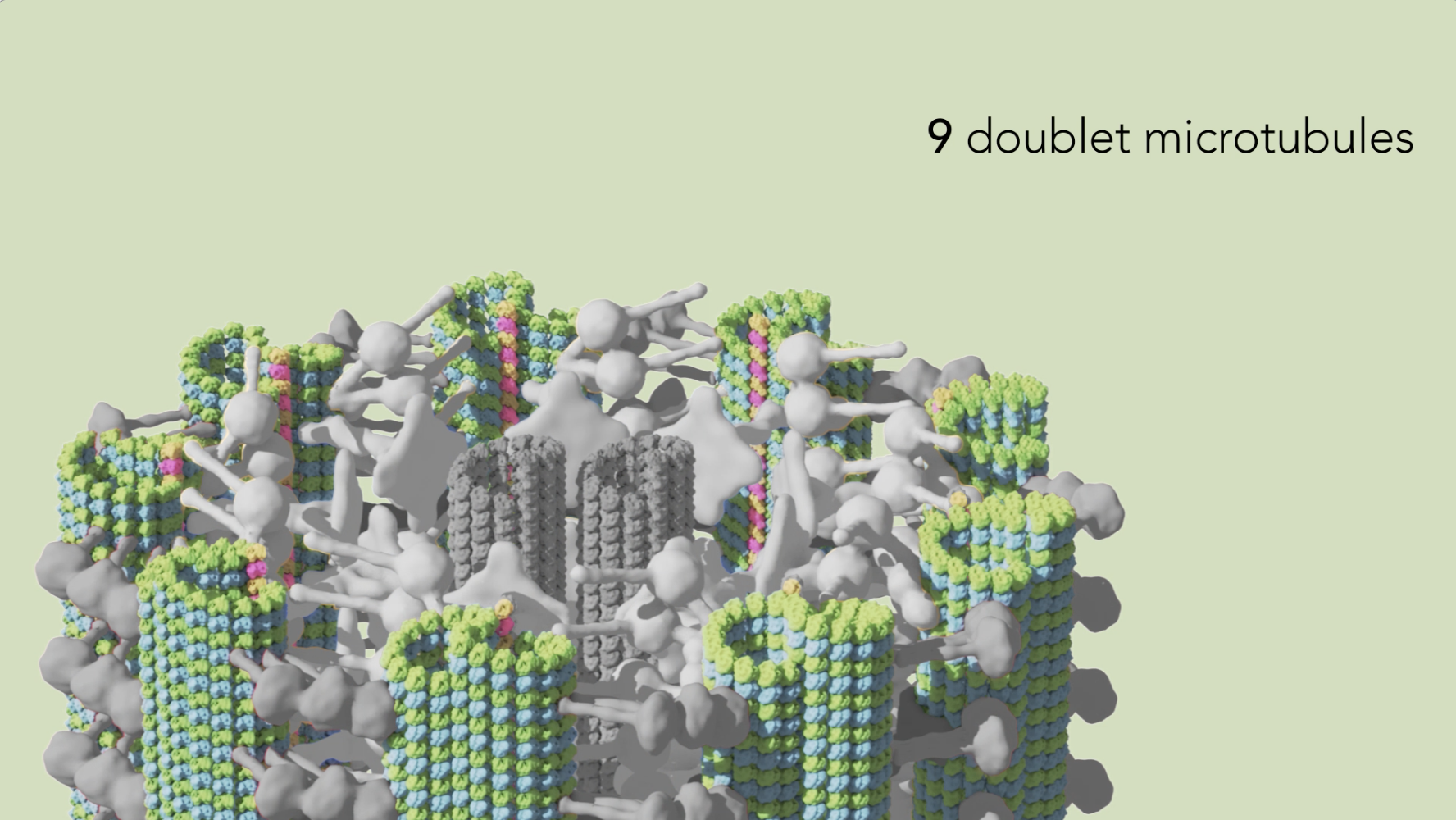 It’s not every day that scientists get to publish a paper on Halloween about a skeleton, but that’s what the laboratories of Alan Brown in the Blavatnik Institute at Harvard Medical School and Rui Zhang at Washington University in St. Louis just did.

As reported in the Oct. 31 print issue of Cell, the collaborating teams mapped out the atomic structures of significant components of the cytoskeletons of cilia—hairlike appendages on cell surfaces that serve in critical roles as transporters and sensory signal antennae.

Specifically, the researchers peeled open the secrets of microscopic tubes known as doublet microtubules and dozens of mysterious proteins attached to them. Together, these make up a large part of the complete ciliary backbone, or axoneme.

The findings help explain how cilia grow and function. The work also provides a molecular basis for understanding diseases that arise from malfunctioning cilia.

“To be able to see this level of detail for such a large biological complex is incredibly exciting,” said Brown, assistant professor of biological chemistry and molecular pharmacology at HMS and co-corresponding author of the paper with Zhang.

Found in a vast range of organisms, cilia protrude from nearly every cell in animals. In humans, waves of cilia sweep mucus from the respiratory tract, carry eggs down the fallopian tubes, help propel sperm cells and facilitate the flow of cerebrospinal fluid through the brain and spinal cord.

Other kinds of immobile cilia act as antennae on the cell surface, receiving signals from inside and outside the body to enable sight, hearing and smell.

Mutations in ciliary proteins can cause ciliopathies, rare and incurable diseases such as situs inversus—a condition in which the body’s major internal organs are flipped, mirrorlike, from their normal positions—and primary ciliary dyskinesia, which leads to chronic respiratory illness and infertility.

Doublet microtubules are critical for proper ciliary function. They provide strength and rigidity, allowing the type of cilia that move to beat quickly without breaking. They also serve as railroads, ferrying proteins between the two ends of cilia, which can be far apart on a cellular scale.

Understanding the structure of ciliary doublet microtubules “will help us link mutations in patients to what’s happening at the protein level,” said Brown.

Many scientists over the years have probed at the structure of the ciliary skeleton, but key details remained out of reach.

To crack the case, Brown and Zhang’s teams turned to electron cryomicroscopy, or cryo-EM. Recent advances in the technology allow scientists to peer into biological structures at atomic resolution.

The researchers used a common model organism for studying cilia: Chlamydomonas reinhardtii, green algae that use cilia to swim.

Even with cutting-edge technology on their side, solving the structure proved “a massive technical challenge,” said Zhang, requiring thousands of hours of computational processing. 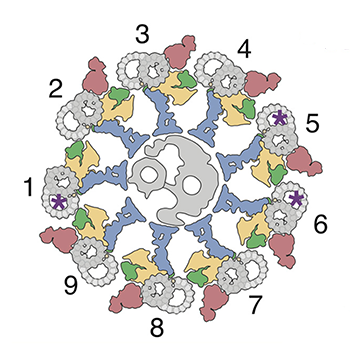 The microtubule’s structure is “surprisingly complex,” said Brown, although he added that the complexity makes sense, given its multiple roles in ciliary function.

“The structure also teaches us a lot about microtubules found elsewhere in cells, and why doublet microtubules are so special,” said Zhang.

Scientists already knew that axonemes in the mobile type of cilia include a ring of nine doublet microtubules made of the namesake protein tubulin. The new study revealed that besides tubulin, each microtubule contains 33 proteins on the inside and five proteins on the outside that have different repeating patterns, or periodicities, of either 8, 16, 24, 48 or 96 nanometers.

Each pattern is divisible by eight because the tubulin pairs the proteins are attached to are each 8 nanometers wide, the researchers explained.

If these repeating elements are disturbed, cilia go awry.

“They can become immotile or beat with strange waveforms,” said Brown.

The insights should help researchers seeking to intervene in ciliopathies.

Probing further, the team determined each protein’s identity and position and sketched out how all 38 of them interact.

In addition to revealing the architectural principles that underlie doublet microtubule structure, the researchers showed how the various proteins assemble, maintain their strict repetition and stabilize microtubules against the mechanical stress of the cilia’s constant back-and-forth beating.

Next, Brown wants to learn how doublet microtubules work with other structures in the axoneme to permit that beating.

“Ultimately we want to make atomic movies of a moving cilium that can be used to design new therapies to repair cilia function in human diseases,” he said.