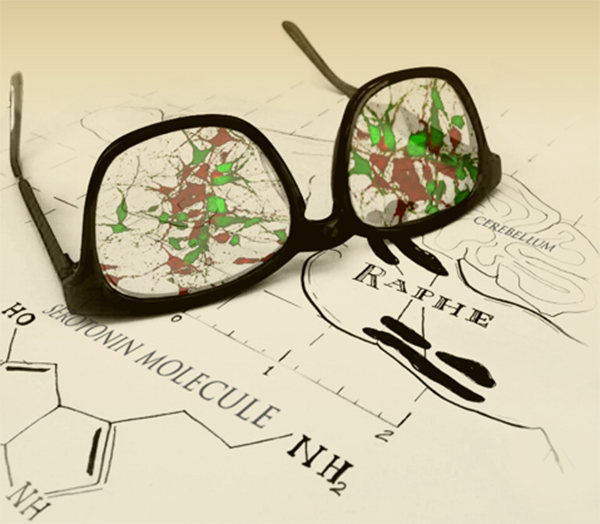 In this illustration, a pair of eyeglasses “resolves” distinct serotonin neuron subtypes (shown as brightly colored cells) on a simple map of a region called the raphe in the mouse brain. By viewing serotonin neurons through multiple “lenses”—such as single-neuron and population-scale global gene expression, developmental lineage and anatomy—researchers have revealed diverse subtypes and principles of subtype organization in the brain. Image: Mallory Rice

Recently, however, scientists have begun to learn that these neurons differ from one another—and that the differences likely matter in dysfunction and disease.

Last year, a team led by Harvard Medical School genetics professor Susan Dymecki defined a subgroup of serotonergic neurons in mice by showing that those cells specifically, among all serotonergic neurons, were responsible for increasing the breathing rate when too much carbon dioxide builds up in the body.

Now, Dymecki and colleagues have taken a first stab at systematically characterizing serotonergic neurons at the molecular level and defining a full set of subtypes, again in mice.

The researchers report in Neuron that serotonergic neurons come in at least six major molecular subtypes defined by distinct expression patterns of hundreds of genes. In many cases, the subtypes modulate different behaviors in the body.

By conducting a cross-disciplinary series of experiments, the researchers found that the subtypes also vary in their developmental lineage, anatomical distribution, combinations of receptors on the cell surface and electrical firing properties.

“This work reveals how diverse serotonin neurons are at the molecular level, which may help to explain how, collectively, they are able to perform so many distinct functions,” said Benjamin Okaty, a postdoctoral researcher in the Dymecki lab and co-first author of the paper.

“To have the list of molecular players that make each of these subtypes different from one another gives us an important handle on learning more about what that cell type does and how we can manipulate only that subtype,” said Dymecki. “It holds enormous therapeutic potential.”

“This is an ancient neurotransmitter system that’s implicated in many different diseases, and it’s starting to be cracked open,” said Morgan Freret, a graduate student in the Dymecki lab and co-first author of the paper. “We can now ask questions in a more systematic way about which serotonergic cells and molecules are important in, for example, pain, sleep apnea or anxiety.”

Crucially, the team also showed that a serotonergic neuron’s gene expression and function depend not only on its location in the adult brain stem, but also on its cellular ancestor in the developing brain.

“Earlier work had shown that you could explore the relationship between a mature neuronal system and the different developmental lineages that gave rise to it, but we had no idea whether it was meaningful,” said Dymecki. “We show that the molecular phenotypes of these neurons track quite tightly to their developmental origin, with anatomy making some interesting contributions as well.”

While the work was done in mice, Dymecki is optimistic that it will be replicated in humans because the serotonergic neuronal system is in a highly conserved region of the brain, meaning it tends to remain consistent across vertebrate species.

Because of this, researchers can look for the same molecular signatures in human tissue and begin to tease apart whether particular subtypes of serotonergic neurons are involved in conditions such as sudden infant death syndrome (SIDS) or autism.

Such research could ultimately reveal previously unknown contributions of the serotonergic neuronal system to disease, inform the development of biomarkers or lead to more targeted therapies.

The team’s findings could also inform stem cell research. “Which subtype of serotonergic neuron are we getting when we use current stem cell protocols?” asked Dymecki. “Can we drive the development of different subtypes? Can we watch how gene expression patterns change over time during development for each subtype?”

Finally, the study provides an example of a highly integrative approach to understanding brain function at multiple scales, “linking genes and gene networks to the properties of single neurons and populations of neuron subtypes, all the way up to the level of animal behaviors,” said Okaty. “I think it’s a useful template going forward. Imagine what we’d learn by applying this approach to all the neurotransmitter systems in the brain.”