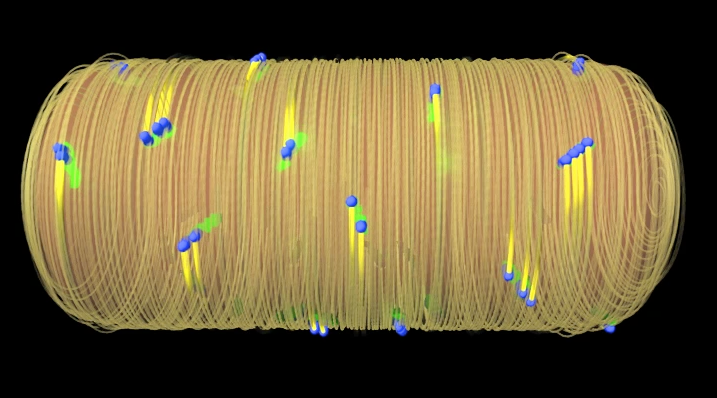 Scientists at HMS have gleaned important insights into the molecular architecture of the bacterial cell wall--an alluring target for the development of drugs that treat antibiotic-resistant infections. In this image, the blue balls are wall-making proteins. The yellow represents a newly synthesized bacterial cell wall. The green color represents "scaffolding" proteins. Video: Janet Iwasa for Harvard Medical School

The creation of two stand-alone academic units is the natural result of the rapidly evolving understanding of the complexity and importance of each of these fields and their numerous intersections with many other disciplines and modes of inquiry. The new structure is also aimed at propelling the growth of existing resources and the cultivation of new ones for two disciplines dealing with some of the era-defining challenges in biomedicine, School leaders said.

“Our scientists are at the forefront of tackling problems ranging from cancer and autoimmunity to drug resistance and emerging infections, and the importance of their mission cannot be overstated,” said George Q. Daley, dean of Harvard Medical School.

“The formation of two independent departments is an acknowledgement of the depth and intellectual rigor of those two scientific communities but it is also an opportunity to generate new resources and propel their work even further without sacrificing the tremendous opportunities for collaboration and synergy,” Daley added.

The Department of Immunology will be led by Arlene Sharpe, the George Fabyan Professor of Comparative Pathology and a world-renowned immunologist and expert in T cell regulation. Her work has yielded key insights into cancer’s ability to evade immune surveillance. Her discoveries, together with findings made by others, helped launch a class of new drugs that unleash the immune system to attack tumors.

Ann Hochschild, the Maude and Lillian Presley Professor of Microbiology, will be at the helm of the Department of Microbiology. Hochschild is a leading expert in bacterial transcription and the biology of prions—infectious self-propagating protein particles recently recognized as a source of non-genetic variation in microbes.

The formation of the two new departments will enable the recruitment of new faculty in each discipline, Sharpe and Hochschild said, and both departments have already initiated searches for new junior faculty.

In many ways, Sharpe said, this is the decade of immunology and immunotherapy. Scientists are gaining increasingly deeper insights at the molecular level of the role of the immune system in disease and health. As a result, they are developing new strategies to treat and prevent a range of immune-mediated diseases, including cancer, autoimmune disorders, infectious disease, allergies and transplant rejection. The repertoire of new cancer immunotherapy treatments is a prime example.

“As immunotherapy has come of age, we are beginning to achieve the tremendous promise of discoveries in immunology for improving human health,” Sharpe said.

The immune system also is increasingly recognized for its critical role in conditions not traditionally viewed as immunologic in nature—cardiovascular disease, diabetes, obesity, and neurodegenerative conditions such as Alzheimer’s disease, among others. The unifying link appears to be inflammation—the body’s response to injury, irritation or the presence of foreign invaders such as viruses or bacteria. Unraveling precisely how inflammation drives the development of such conditions has become a central line of inquiry in immunology.

Another emerging challenge for the field is the rising incidence of immune-mediated diseases such as allergies, type 1 diabetes and inflammatory bowel disease (IBD), Sharpe said. These conditions have not only increased in frequency but are now occurring at an earlier age. For example, IBD, a serious immune-mediated intestinal inflammation once deemed a disease of young adulthood and middle age, is now seen in children as young as 3. The factors behind these trends remain unclear but most likely involve a complex interplay of genes, environment, infections and lifestyle, with immune dysregulation at the epicenter of this dynamic, Sharpe said.

The recent translation of fundamental insights into clinical therapies—such as the repertoire of new cancer immunotherapy treatments—has sparked growing multidisciplinary interests in the field of immunology. Thus, the Department of Immunology will increasingly engage with other departments, schools and institutions within the Harvard ecosystem, with clinical affiliates and beyond, Sharpe said. Doing so will help propel basic discovery and the translation of new insights into therapies.

“In all of this, the department of immunology will remain deeply rooted in fundamental inquiry to understand the basic mechanisms of immunity and their role in disease and health,” Sharpe says. “This knowledge will provide a foundation for therapeutic discovery.”

Microbiology as a pillar of modern biomedicine

Microbiology has shaped contemporaryunderstanding of the molecular processes essential to all cellular life. It has also been instrumental in the development of antibiotics, antivirals and vaccines— which are among the most transformative treatments to emerge over the last century, Hochschild said. Antibiotics, for example, have become indispensable in much of modern medicine not only for the general treatment of bacterial infections but also for infection prevention in surgery, cancer chemotherapy and organ transplantation.

Over the past decade, scientists have generated tantalizing insights into the human microbiota—the trillions of bugs that live on and inside the human body—and its role in disease and health. The microbiota, Hochschild said, represents a new frontier in microbiology. Understanding its function and elucidating the precise effects of specific bacterial organisms could help inform the development of microbially-derived therapeutic agents.

Microbiology is also a critical engine for the development of gene-modifying tools such as the gene-editor CRISPR-Cas that are reshaping all areas of biologic research and promise to transform the treatment of a range of diseases that stem from genetic aberrations.

At the same time, the field is facing daunting challenges, including drug resistance as pathogenic bacteria and viruses rapidly become impervious to common drugs. Scientists at HMS are actively working to address these challenges. For example, the recent discovery of a family of new proteins as critical “builders” of the bacterial cell wall has provided promising targets for the development of new classes of antibiotics.

Another pressing challenge for the field is the emergence of novel disease-causing organisms—think Zika—as well as the return of pathogens once deemed eradicated or at least under control, such as Ebola. Also, as a result of climate change and the increase in global travel, some pathogens—dengue, yellow fever, chikungunya—are spreading to new places and into new environments.

“All of these represent grave threats to global health and society,” Hochschild said. “Moreover, emerging infectious agents of animals and plants present significant risks for the food supply. In the context of these threats, the discipline of microbiology remains critically important as a source of transformative knowledge to facilitate the discovery of novel anti-infective drugs.”

At HMS, microbiology has had a long tradition of curiosity-driven inquiry and, Hochschild said, the new department will build on that legacy because “you just never know where the next breakthrough might come from.”