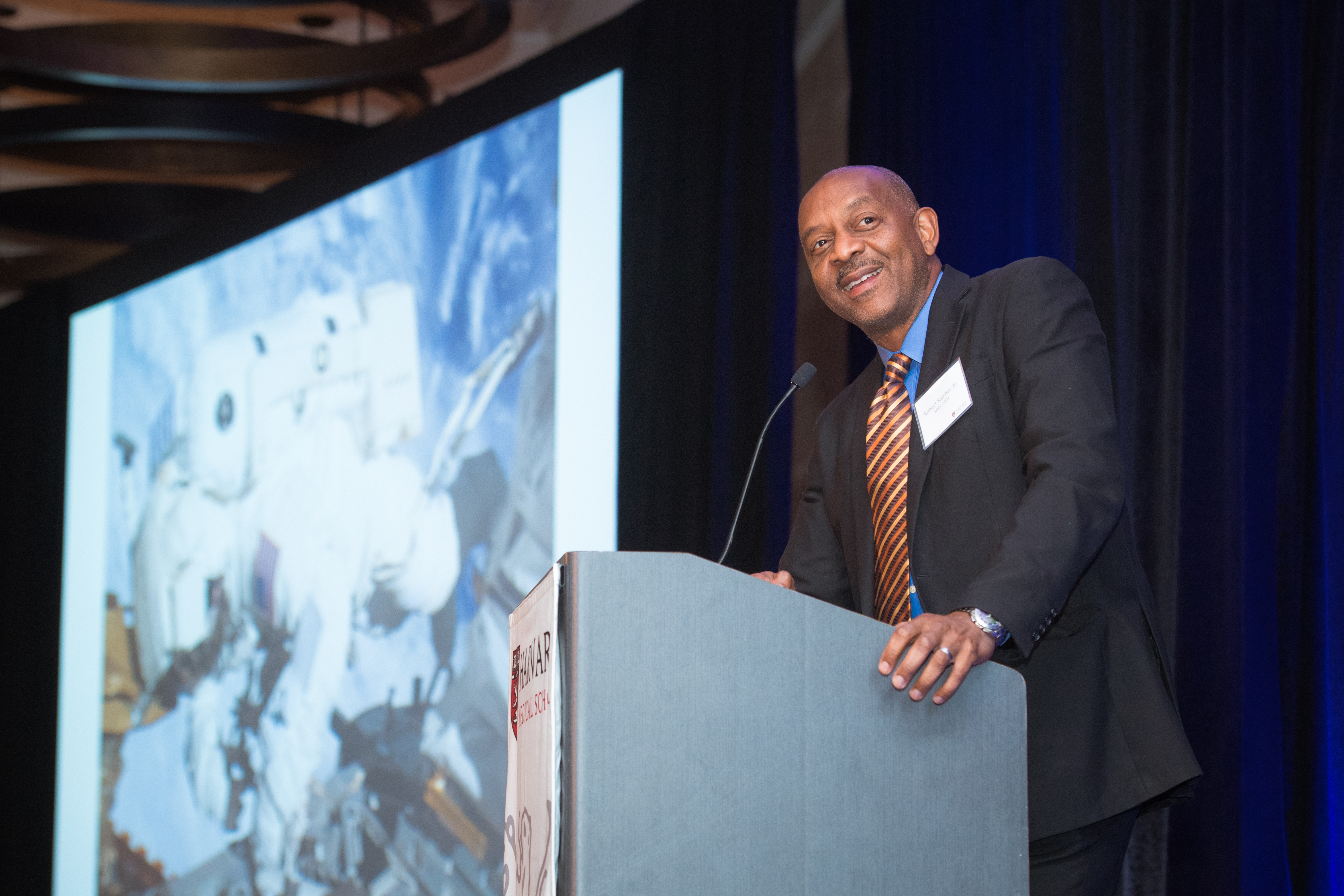 “It’s actually shocking to me, in hindsight, that I was able to do this.”

Those were the words of Robert L. Satcher Jr., MD ’94, PhD, and former U.S. astronaut, commenting on a photo of one of his walks in space during a mission to the International Space Station in 2009.

“I got to do a couple of space walks. It was a lot like orthopedic surgery, but on a much bigger patient,” he said, referring to the engineering and mechanical work he and another astronaut performed on the space station during the walks.

Satcher, now an associate professor of orthopaedic oncology at the University of Texas MD Anderson Cancer Center and adjunct professor at the Ken Kennedy Institute of Information Technology, was the keynote speaker at this year’s Spotlight on Medical Education event on Oct. 23 in Boston. Hosted by the HMS Board of Fellows, the event celebrates the School’s students as well as the alumni and friends who have invested in teaching, learning and financial aid at HMS.

Satcher, a graduate of the Harvard-MIT Program in Health Sciences and Technology, joked that only his mother and third-grade teacher were unsurprised when he was selected by NASA to be an astronaut in 2004, primarily because he had always told them he wanted to grow up to be an astronaut and a surgeon.

But it was in Massachusetts, Satcher said, where he received his PhD in chemical engineering from MIT before earning an MD from Harvard Medical School, that his dreams and aspirations really took flight.

“Here in Boston is where I got my love of discovery and exploration,” he told the gathering of more than 160 HMS supporters at the Spotlight event, adding that he did struggle at first with whether he should even attend medical school. Fortunately, he said, “HST discovered me.”

The HST program, a collaboration among HMS, MIT, Harvard University and Harvard-affiliated teaching hospitals, integrates science, medicine and engineering to solve problems in human health. It was at HMS, Satcher recalled, that he first met Augustus A. White III, the Ellen and Melvin Gordon Distinguished Professor of Medical Education and professor of orthopedic surgery at Beth Israel Deaconess Medical Center. White not only helped spark Satcher’s interest in orthopedic surgery, he “had a very profound impact on our field,” said Satcher.

Following the Columbia shuttle disaster in 2003, Satcher said, he decided to apply for the shuttle program and was surprised to get a call some time later asking if he was still interested. He joined the NASA Class of 2004 with two other physicians, and five years later, in November 2009, he was taking his first walk in space, the first orthopedic surgeon to do so.

“We have to recognize the amazing courage it took to do what you did,” HMS Dean George Q. Daley told Satcher at the dinner.

Daley, also a graduate of the HST program, said HMS continues “to be blessed by an extraordinary community of talented students … who are committed to helping others and changing the world.”

Daley told the gathering that he was able to attend both Harvard College and HMS because of the financial aid packages he received. He thanked audience members for their support of today’s students, who he called “extraordinary citizens of the world.”

Eighty percent of HMS students receive financial support and one in five comes from a family with less than $50,000 in combined income. Daley added that many promising international students are ineligible for federal funding because many training grants are restricted to U.S. residents.

Two HMS students spoke at the celebration, describing their own backgrounds and unique journeys to HMS. Ann Morgan Cathcart, who is pursuing an MD-PhD, said she grew up in East Texas, where her father worked in the oil fields before going to school to become a pediatrician. She said her father was one of her outstanding role models.

“He wanted to not only treat patients but he wanted to change medicine,” she said.

His example as a physician, and his later struggle with cancer, inspired her to want to study cancer, she said, prompting the melanoma research she has now undertaken at HMS.

Vartan Pahalyants, who is pursuing an MD-MBA, said he was born in Uzbekistan to parents who were both pediatricians. For his father, he said, “It was not unusual for his patients to pay him in piglets and goats for the services he provided.” The family moved to New York City when Vartan was 12 years old and he later “tried medicine” himself by volunteering in the emergency department at Columbia University Irving Medical Center.

Now, he says, his focus is on improving access to care for as many patients in the U.S. as possible. He hopes his joint medical and business degrees from Harvard will help him accomplish this goal.

“I think we can do better than what we have today,” he said. “By getting this MBA degree, I’ll be able to figure out more ways to address these inequities and offer better health care at reduced costs.”

Both students said that the financial aid packages they received were key to their being able to attend HMS.

“When I realized that my MD-PhD could be fully funded, that made it easy to decide to come here,” said Cathcart.

Dean for Medical Education Edward Hundert thanked event attendees for their support for students like Cathcart and Pahalyants, saying their contributions help create a living legacy because each of the students will go on to do important, life-changing work.

“The ripple effects are all the students they will teach, the patients they will care for and the science they’ll discover,” he said. 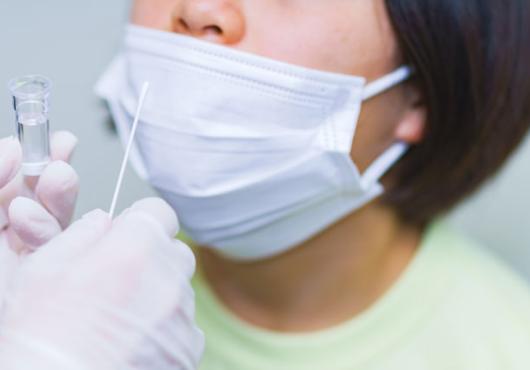 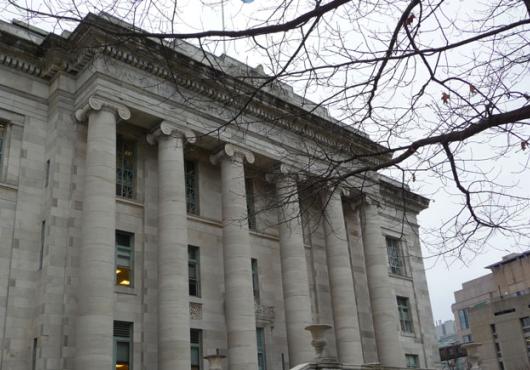 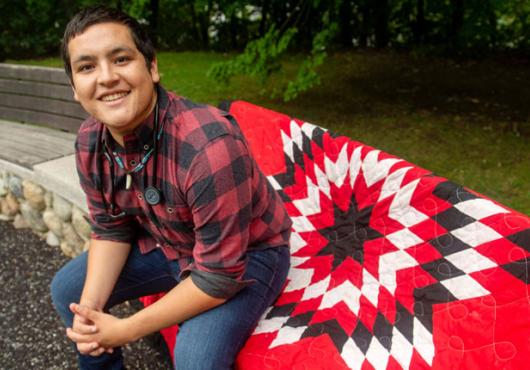