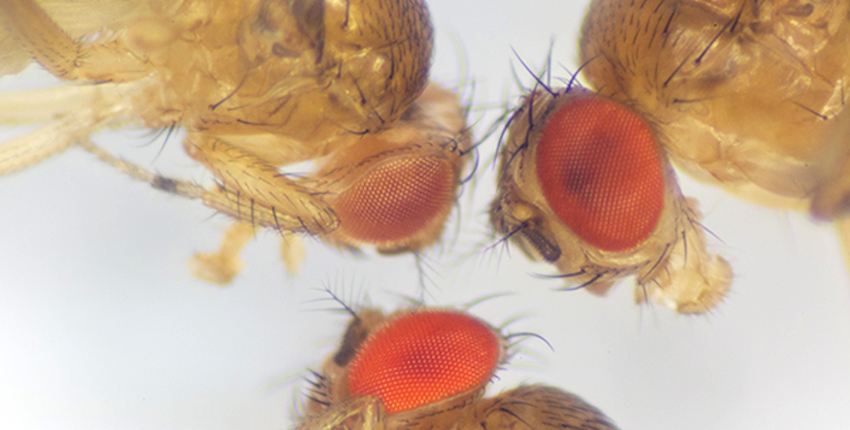 Why do these flies continue to attract so much scientific interest even as research tools have grown more sophisticated over the decades?

As director of the Drosophila RNAi Screening Center at HMS, Mohr helps fruit-fly researchers with cell screening, fly stock production and bioinformatics services. She has also studied fruit flies for more than 15 years.

HMN: How did you get your start as a “fly person”?

MOHR: I was an undergraduate at Wesleyan University in Middletown, Connecticut, and I had a work-study job washing dishes for the biology and biochemistry departments. I would sit there and put one tub of dishes into the autoclave and take them out and do my homework in the meantime. I wasn’t too impressed by the fly lab because it always had the same set of dishes, these identical half pint-sized bottles used to culture flies. The other labs had giant cylinders and flasks and beakers of different sizes. That seemed like a reason to judge! I was a freshman—what did I know?

Later, in graduate school, I didn’t get into the lab I was most excited about, so I was kind of left hanging. I asked an instructor if I could do an extra rotation in his lab, which was a fly lab. It felt like a last-ditch effort, but it turned out to be a perfect match intellectually. He ended up becoming my PhD advisor, and I’ve been studying flies ever since.

HMN: Why has so much research been conducted in fruit flies?

MOHR: It’s part accident and an awful lot rational. There isn’t any particular reason it had to be this fly, but the fact that Drosophila melanogaster caught on has provided a number of strategic advantages.

Compared to humans, it has a simple genome with only four pairs of chromosomes. In the early years, that was a significant advantage. Also, some fly tissues have highly polyploid chromosomes—many copies of chromosomes within a single cell—which, even with the microscopy of the early 20th century, let early geneticists see things they couldn’t see in ordinary cells. They could literally see something like an inversion in the DNA, where a piece of a chromosome has been flipped around. That was a big deal for research as well.

One of the most exciting things we’ve learned in the post-genomic era is how incredibly conserved genes and pathways and genetic activities that control organism-level phenomena are across organisms. In the early days it didn’t matter how much flies were like people, because we were learning something useful at a basic level about how inheritance works. Now we’ve realized just how many similarities there are and how those similarities can be exploited to learn about human health and disease.

And then on a practical level, Drosophila has a short life cycle of about two weeks, and females have a lot of offspring—they can lay hundreds of eggs in a few days. Both these features make them a great system for genetic experiments. They’re also easy to culture in the lab, living off a mix of corn meal, sugar and yeast, and it’s easy to tell males apart from females.

HMN: What have fruit flies taught us about genetics and biology?

MOHR: The full list would be very long! Early on, the fly was highly relevant for gaining an understanding of mechanisms of inheritance. Another area where flies have had an amazing impact is in developmental biology and signal transduction, or the ways cells receive and respond to messages. Part of that legacy remains in the names we’ve given to signaling pathways in humans, like Notch, which is named for the notched pattern that a mutation of the gene can create on fly wings. Flies taught us what the components of many signaling pathways are, how they’re wired up with one another and what acts on them positively and negatively.

A cool example of signaling specifics is planar-cell polarity. That’s kind of a mouthful, but it just refers to cells on a flat surface that have a polarity, a direction. If you look at your forearm, you see small hairs, and most are pointing in the same direction. It wouldn’t be a big deal on your arm if a few were pointing in a different direction, but in something like the inner ear, those oriented projections make it possible for us to hear. The early work in uncovering how polarity is established across a plane of cells was done in Drosophila.

Relatedly, Drosophila has had a profound effect on our understanding of normal development, where you have to tell cells to divide, then stop dividing, then take on an identity. That ends up having a tremendous impact on our understanding of cancer, where all those same kinds of things have gone wrong. There’s a direct connection, in my view, between the work in fly development and what we now know about cancer and cancer treatments that act on those pathways.

There are so many more examples of what we’ve learned from Drosophila, such as how flies helped us recognize that X-rays are potent mutagens, uncover the cellular mechanisms of innate immune responses, understand the genetics of behavior—the list goes on. I couldn’t fit all of the examples even in this book.

HMN: Obviously, fruit flies aren’t people. How useful are they for understanding human health and disease?

MOHR: There are two answers I would give. One is fundamental understanding. If you want to know what all the parts do, it’s easier to start with a simpler model. Once you identify what a gene does in one organism, which we can do in flies with relative ease, you can look for similar genes in more complex organisms and make rational hypotheses about their activity. This has proved over and over to be a useful approach.

The second answer is that flies serve as a living petri dish. I can easily grow tens of thousands of flies with the same genotype, quickly assess the effects of a mutation and learn what’s going wrong at the cellular level. This is especially useful as we explore the genetic underpinnings of human disease. Genome-wide association studies, and known and suspected cases of inherited disease, are leading to a lot of good candidates for genes that seem to influence the likelihood of getting a disease. Some will turn out to be real and some will be red herrings. Flies offer a platform to start sorting through those candidates and narrow down the true culprits.

We know now that about 60 percent of all human genes, and 75 percent of disease-associated genes, have equivalents, or orthologs, in Drosophila. Studying these genes has taught us about a whole range of disease mechanisms. One area with a lot of promise is age-related diseases, including neurodegenerative diseases. Flies live for about two or three months. That’s long enough to see age-related changes—they slow down with age in ways similar to what happens in people—but short enough to accelerate the research.

HMN: What made you decide to write this book for nonscientists?

MOHR: If we want to convince society to continue to invest in research, I think we have a responsibility to show what the research is providing. It’s important for scientists working in any system to find ways to send the message that investments in biological and biomedical research have lasting value.

I’m the only scientist in my family. Over the years, I’ve found ways to explain to them what’s interesting to me about fly research and why they might be interested too. I find myself explaining even to other colleagues in biology how and why Drosophila continues to be a relevant model. I felt a book could be useful in conveying that story more broadly.

And it seems people want to know. I hear from folks who say, “Oh, yeah, in high school I looked at red- and white-eyed flies.” They can relate to this, and they’re amazed and delighted, I think, to learn more about what people are doing with flies today and to hear some of the stories about human disease.