When Good Gut Bacteria Get Sick 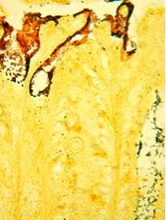 Being sick due to an infection can make us feel lousy. But what must the ecosystem of bacteria, or microbiota, colonizing our guts be going through when hit with infection? A study from HMS researchers at Brigham and Women’s Hospital (BWH) has utilized unique computational models to show how infection can affect bacteria that naturally live in our intestines.

The findings may ultimately help clinicians to better treat and prevent gastrointestinal infection and inflammation through a better understanding of the major alterations that occur when foreign bacteria disrupt the gut microbiota.

“Our gut contains ten-times more bacterial cells than there are human cells in our body,” said Lynn Bry, HMS associate professor of pathology and director of the BWH Center for Clinical and Translational Metagenomics, senior study author. “The behavior of these complex bacterial ecosystems when under attack by infection can have a big impact on our health.”

Co-first author on the study Georg Gerber, HMS instructor in pathology and co-director of the BWH, developed novel computer algorithms to analyze the different stages of infection when a pathogen known as Citrobacter rodentium, which causes disease in mice similar to food-poisoning in humans, was introduced into the guts of mice.

Bry and her team generated a two-month time-series of the population levels of bacteria throughout multiple sites in the intestine. The computational framework, known as Microbial Counts Trajectories Infinite Mixture Model Engine, developed by Gerber, was used to identify dynamic changes within the complex communities of bacteria in the gut associated with infection and inflammation.

The researchers observed many disruptions in the normal bacteria at different locations in the gut during the infection. For instance, they discovered a microbial signature in the colon involving species belonging to the genus Mucispirillum that showed decreases early in infection before the onset of symptoms. Other signatures included increases in populations of bacteria from the Clostridiales and Lactobacillales families occurring after the pathogen had disappeared. Interestingly, some of these signatures occurred in locations in the gut where the pathogen was not directly damaging host cells.

“From a clinical perspective, these new microbial signatures we identified could help clinicians detect early stages of inflammation or subtle persistent disease in patients with gastrointestinal disorders, such as inflammatory bowel disease,” said Bry. “Moreover, several time-dependent microbial signatures we identified may be leveraged to conduct further research of other infectious and inflammatory conditions.”