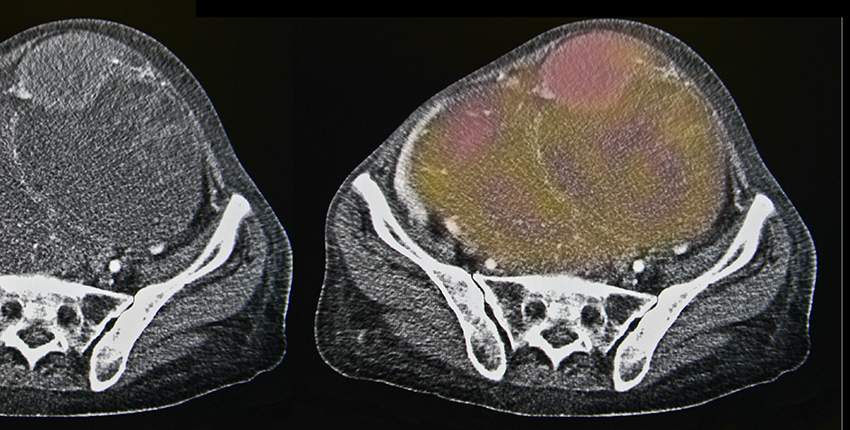 A new study from Harvard Medical School researchers at Massachusetts General Hospital has found that the hypertension drug losartan, which targets the angiotensin signaling pathway, may improve the effectiveness of chemotherapy agents used to treat ovarian cancer. Previous research from the same team identified a similar effect for losartan in animal models of breast and pancreatic cancer, leading to a phase 2 clinical trial that had promising results against pancreatic cancer.

“We know that solid stress imposed by growing cancer cells and the extracellular matrix molecules they produce can compress blood vessels, reducing delivery of drugs and oxygen to tumors,” said Lei Xu, HMS assistant professor of radiation oncology at Mass General and co-senior author of the report published online in PNAS.

“The extracellular matrix itself can keep high-molecular-weight drugs from penetrating tumors, and angiotensin signaling contributes to matrix formation,” Xu said. “Since levels of an important enzyme in the angiotensin pathway are elevated and associated with poor outcomes in ovarian cancer, we investigated whether use of losartan to decrease fibrosis could improve outcomes in animal models of ovarian cancer.”

In a series of experiments in two mouse models, the investigators found the following:

· A mathematical model based on tumor physiology predicts that adding losartan to both low- and high-molecular-weight cancer therapies, delivered either intravenously or intraperitoneally, could improve outcomes.

· Adding losartan to treatment with the chemotherapy drug paclitaxel enhanced the antitumor effect of intraperitoneal paclitaxel and reduced the development of ascites, accumulation of fluid in the abdomen that significantly reduces patients’ quality of life.

· Losartan depleted the extracellular matrix by inducing the expression of antifibrotic miRNA molecules, which could be used as biomarkers for response or resistance to chemotherapy.

An analysis of records of patients who received standard treatment for ovarian cancer at Mass General or Brigham and Women’s Hospital while also being treated for hypertension found that those patients taking losartan or other angiotensin-targeting drugs at the time of diagnosis lived an average of 30 months longer than those taking other hypertension drugs.

“The entire class of angiotensin-targeting drugs that includes losartan has been shown to reduce collagen accumulation in cardiac and renal fibrotic disease,” said Xu, who is a member of the Edwin L. Steele Laboratories for Tumor Biology in the Mass General Department of Radiation Oncology. “Losartan is a safe and inexpensive drug that would cost less than one dollar a day while making a significant difference for patients with ovarian cancer.”

Rakesh Jain, the HMS A. Werk Cook Professor of Radiation Oncology (Tumor Biology) at Mass General, director of the Steele Labs and co-senior author of the PNAS report, added, “Our findings—on top of the beneficial results of the recent phase 2 trial for pancreatic cancer—should provide information and tools to explore a new therapeutic target for ovarian cancer, which leads to the death of around 14,000 women in the U.S. each year.”

Study co-authors Oladapo Yeku and David Spriggs of HMS and the Mass General Center for Gynecologic Oncologyhope to initiate a clinical trial of losartan in ovarian cancer patients later this year to test this strategy.