The Bertarelli Program in Translational Neuroscience and Neuroengineering, a collaborative program between Harvard Medical School and the École Polytechnique Fédérale de Lausanne (EPFL) in Switzerland, has announced a new set of grants worth $3.6 million for five research projects. This is a further strengthening of the partnership between Harvard and Swiss scientists begun in 2010.

Three of the five projects will pursue new methods to diagnose and treat hearing loss. A fourth project focuses on the dynamics of brain networks in children with autism, and the fifth concentrates on cell transplantation strategies that could reverse certain forms of blindness.

The research projects were all selected for their scientific quality, the novelty of the approach proposed and the potential for genuine clinical impact. Three of them are a continuation of successful research projects from the Bertarelli Program focusing on novel approaches to understanding or treating sensory disorders.

To promote collaborations between U.S.- and Swiss-based scientists as well as between neuroscientists and engineers, the funding conditions stipulate that each project be an equal collaboration between Harvard and EPFL. This incentivized researchers to find new collaborators with complementary skills, leading in turn to new interdisciplinary projects that combine technologies and approaches in novel ways.

“We are delighted at the continued generosity of the Bertarelli Foundation,” said Jeffrey S. Flier, Dean of the Faculty of Medicine at Harvard Medical School. “This type of forward-thinking support is exactly what’s needed to help us continue to unravel the profound complexities of the human brain.”

David Corey, HMS professor of neurobiology and director of the Bertarelli Program for Harvard Medical School, said, “The past 40 years of basic research in neuroscience have produced an extraordinary understanding of how the brain works and how it can malfunction in neurological and psychiatric disease.  We are now at a point where we can use this understanding to treat these devastating diseases.  The Bertarelli Program in Translational Neuroscience and Neuroengineering combines basic neuroscience with the technology and problem-solving focus of engineering to accelerate the delivery of new treatments to the clinic.” 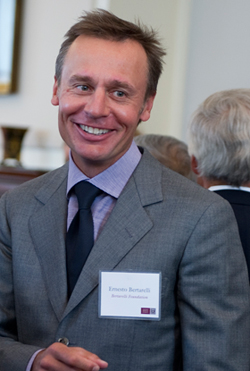 Commenting on the new research, Ernesto Bertarelli, co-chair of the Bertarelli Foundation, said, “When my family and I had the vision for this program, it was based upon bringing together scientists and medical specialists from different disciplines and countries to really push the boundaries of neuroscience and neuroengineering, creating a melting-pot of different talents, passions and visions united by a commitment to find ground-breaking ways to treat people and to make their lives better. What has been achieved since 2011 is highly encouraging. What might be achieved with these new research projects is just as exciting.” Bertarelli, a graduate of Harvard Business School, is also a member of the Harvard Medical School Board of Fellows.

The five new research programs are:

One of the great challenges in diagnosing hearing problems is that the physician cannot see the tissues and cells of the inner ear. In contrast, simple optical methods allow inspection of the retina of the eye. In this continuation proposal, the researchers will collaborate to develop new imaging methods for the human inner ear. While they have previously showed that they can image the inner ear with minimal invasion, they will now extend advanced endoscopic two‐photon technology to allow subcellular imaging, use the fluorescence of two natural metabolic products to assess the health of the inner ear, and extend initial results to enable imaging of the whole hearing organ. These experiments draw on the highly complementary skills of the two investigators to develop new methods for diagnostics for hearing loss.

The cochlear implant, a device that bypasses the deaf inner ear to convey electrical signals directly to the auditory nerve, has been the most successful neural prosthesis over the past few decades with over 200,000 in use worldwide. However, some patients cannot receive an implant due to a damaged inner ear or auditory nerve. In their 2011 Bertarelli project, the researchers optimized design and fabrication of experimental auditory brainstem implants using high‐density, flexible electrodes. Experiments were short-term and were only performed in mice. In this project, they will extend the research to long‐term experiments in mice to test the safety, durability and effectiveness of the devices. They will also extend the flexible electrodes to human tissue in order to optimize the geometry and stimulation parameters that will allow eventual use in human patients.

For more than a decade, hopes have been pinned on gene therapy to correct inherited disorders in humans. There are, for example, over 300 distinct inherited forms of deafness that cause congenital deafness in about 1 in 1000 newborns, and these might be treated by gene therapy to replace defective genes. A longstanding problem for gene therapy for hearing loss, however, is that very few viral vectors will enter the mechanosensory cells of the inner ear.

This continuation of a successful project from 2011 will explore new vectors to carry genes into these sensory cells and will broaden the range of treatable genetic deafness. The researchers will also use modern genome editing technologies to repair specific mutations that cannot be corrected by simple gene replacement.

Brain networks in children with autism

Functional magnetic resonance imaging (fMRI) has successfully allowed us to watch brain activity in humans during experimental tasks and has revealed which brain regions are specialized for which computational functions. fMRI has also begun to be used to understand disorders of brain connectivity—the information flow between these regions.  But movement of the head during imaging can distort the image, and children with autism tend to move more than others, impeding diagnosis.

These researchers will first develop methods to detect and correct for head motion in children and other difficult patients. They will then use fMRI scans of autistic children to test abnormal connectivity between brain regions, which is hypothesized as a cause of autism. Finally they will identify aspects of brain connectivity that correlate with specific types of autism and ask whether connectivity can be improved with current autism treatments. These experiments will address general problems of fMRI in moving patients, including specific studies of autistic patients and the role of connectivity in this disorder.

Retinal degenerative diseases are leading causes of incurable blindness and are often characterized by loss of the light-sensing photoreceptor cells. Because the regenerative capacity of the retina is extremely limited, cell transplantation strategies hold promise to restore lost function. Researchers have had some success in isolating the progenitor cells that can turn into photoreceptors, yet knowledge of the optimal stage of differentiation for transplantation is lacking.

The overall goal of this project is to develop cell lines that could be transplanted into the retina to reverse certain forms of blindness and to discover drugs that could prevent or reverse retinal degeneration.  This will be done in three stages: First, researchers will coax progenitor cells to become cone photoreceptors, the type of photoreceptor responsible for color vision and high-acuity vision. Second, researchers will engineer scaffolds that can support the growth and differentiation of these photoreceptors. The third stage is to use such scaffolds as a platform to test potential compounds that can reverse retinal degenerative disorders.

“The tremendous success of the first round of projects has amply validated the vision of the Bertarelli Foundation in creating this unique collaborative program,” said Corey. “We are really excited about the next round of projects.  They have the potential both to move these successes to the clinic and to open new areas with the promise of treatment for neurologic disease.”