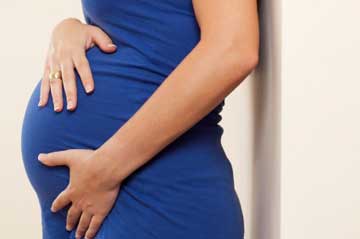 Elevated risk of miscarriage, preterm birth, neonatal health complications and possible long-term neurobehavioral abnormalities, including autism, suggest that a class of antidepressants known as selective serotonin reuptake inhibitors (SSRIs) should be prescribed only with great caution and with full counseling for women experiencing depression and attempting to become pregnant, according to HMS researchers at Beth Israel Deaconess Medical Center.

“Depression and infertility are two complicated conditions that more often than not go hand in hand. And there are no definitive guidelines for treatment,” said lead author Alice Domar, HMS assistant clinical professor of obstetrics, gynecology and reproductive biology at Beth Israel Deaconess Medical Center, and Executive Director of the Domar Center for Mind/Body Health at Boston IVF.

“We hope to provide a useful analysis of available data to better inform decisions made by women and the providers who care for them,” Domar said.

Domar, along with colleagues from Tufts Medical Center and MetroWest Medical Center, conducted a review of published studies evaluating women with depressive symptoms who took antidepressants while pregnant. The results appear online October 31 in the journal Human Reproduction.

“There are three main points that stand out from our review of the scientific studies on this topic,” said senior author Adam Urato, chairman of obstetrics and gynecology at MetroWest Medical Center and a maternal–fetal medicine specialist at Tufts Medical Center.

“First, there is clear and concerning evidence of risk with the use of the SSRI antidepressants by pregnant women, evidence that these drugs lead to worsened pregnancy outcomes. Second, there is no evidence of benefit, no evidence that these drugs lead to better outcomes for moms and babies.  And third, we feel strongly that patients, obstetrical providers, and the public need to be fully aware of this information,” Urato said.

Over the last 20 years antidepressant use has increased by 400 percent. Antidepressants are now the most commonly prescribed medication in the United States for people between 18 and 44 years of age, the childbearing years for most women. Also, as women enter their late 30s and early 40s they are more likely to experience infertility.

“According to the Centers for Disease Control, more than 1 percent of the babies born in the U.S. each year are the result of an IVF cycle,” wrote the authors. “And most women will report symptoms of depression during infertility treatment, especially following unsuccessful treatment cycles.”

As many as 11 percent of women undergoing fertility treatment report taking an SSRI to combat depressive symptoms, but Domar and colleagues found no evidence of improved pregnancy outcomes with antidepressant use, and in fact, found the opposite. They also found plenty of controversy around SSRI efficacy. Many studies found SSRIs to be no more effective or only slightly more effective than placebo in treating depression.

“More broadly, there is little evidence of benefit from the antidepressants prescribed for the majority of women of childbearing age—and there is ample evidence of risk,” the authors wrote.

For starters, there is mounting evidence that SSRIs may decrease pregnancy rates for women undergoing fertility treatment. Additionally, studies consistently show that women using antidepressants experience increased rates of miscarriage. There is also a strong signal of congenital abnormalities, the most noted of which is the association between the use of the antidepressant Paxil and cardiac defects.

In 2005, this association prompted the FDA to ask Paxil’s manufacturer, GlaxoSmithKline, to change Paxil’s risk factor from a C to a D, where a D rating indicates a demonstrated risk to the fetus.

“Preterm birth is, perhaps, the most pressing obstetrical complication,” wrote the authors. In more than 30 studies, the evidence overwhelmingly points to increased risk for early delivery in women who are taking antidepressants.

“This is a significant finding because we know that babies born before 37 weeks are at risk for many short- and long-term health problems,” said Urato. “Caring for premature babies adds up to billions of dollars in health care expenditures.”

Available data also suggest that antidepressant use, especially if it extends beyond the first trimester, leads to an increased risk of pregnancy-induced hypertension and preeclampsia.

“Given the importance of the hypertensive disorders of pregnancy in terms of maternal and newborn morbidity and mortality, and the widespread use of antidepressants during pregnancy, further investigation into this area will be essential,” wrote the authors.

Similarly, long-term exposure to SSRIs appears to correspond to an increased incidence of birth weight falling below the 10th percentile, coupled with increased rates of respiratory distress.

The health complications associated with antidepressant use can be carried into infancy and beyond. A 2006 study showed that infants exposed to antidepressants in utero had a 30 percent risk of newborn behavioral syndrome, most commonly associated with persistent crying, jitteriness and difficulty feeding. In more rare instances the syndrome can produce seizures and breathing difficulties, leading to the need for intubation.

Studies have also shown delayed motor development in babies and toddlers. A Kaiser Permanente study showed a "two-fold increased risk of autism-spectrum disorders associated with maternal treatment with SSRI antidepressants during the pregnancy, with the strongest effect associated with treatment during the first trimester.”

“There is enough evidence to strongly recommend that great caution be exercised before prescribing SSRI antidepressants to women who are pregnant or who are attempting to get pregnant, whether or not they are undergoing infertility treatment,” said Domar. “We want to stress that depressive symptoms should be taken seriously and should not go untreated prior to or during pregnancy, but there are other options out there that may be as effective as, or more effective than SSRIs without all the attendant risks.”

Domar and team looked at studies assessing different treatment modalities for depression in the general population, including psychotherapy, exercise, relaxation training, yoga, acupuncture and nutritional supplements. While many of these options were shown to provide some benefit, psychotherapy, specifically cognitive behavioral therapy (CBT) showed the most promise.

A 2008 study showed impressive results for CBT in depressed women undergoing infertility treatments. The results showed that 79 percent of women who received CBT reported a significant decrease in symptoms, compared with 50 percent of women in the medication group.

“These alternative treatment options may not be appropriate for everyone; still, we think it’s important for women on an antidepressant who are considering becoming pregnant to have a conversation with their physician about the risks and benefits of continuing to take their medication,” said Domar. “Because at this point in time, with no data to indicate an advantage to taking an SSRI during pregnancy, the research all points to increased risk.”

In addition to Domar and Urato, other co-authors include: Vasiliki A. Moragianni and David A. Ryley of Beth Israel Deaconess Medical Center and Boston IVF.

BIDMC is a patient care, teaching and research affiliate of Harvard Medical School, and currently ranks third in National Institutes of Health funding among independent hospitals nationwide. BIDMC is clinically affiliated with the Joslin Diabetes Center and is a research partner of Dana-Farber/Harvard Cancer Center.  For more information, visit www.bidmc.org.