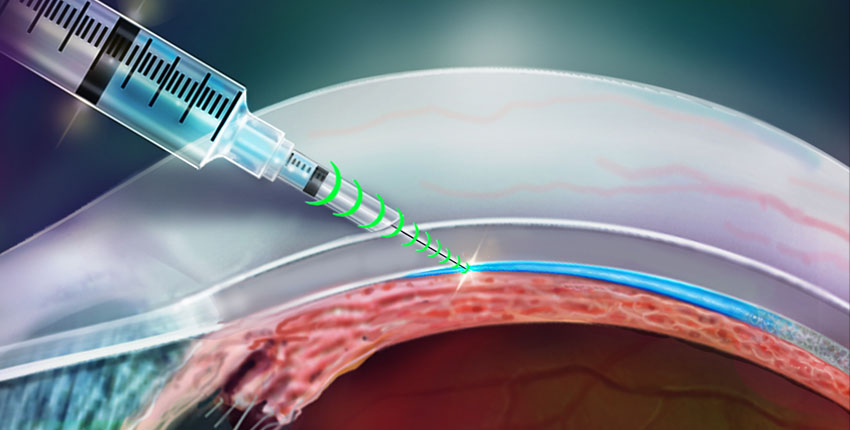 Syringes and hollow needles—among the most feared and most commonly used tools in medical practice—have been around for more than a century.

However, the precise insertion of these devices depends largely on the technique and skill of the person delivering the injection. And some anatomical regions, such as the space in the back of the eye, can be particularly tricky, and indeed risky, to inject.

Their results, based on work done in preclinical models, are published Feb. 25, in Nature Biomedical Engineering.

“In the past century there has been minimal innovation to the needle itself, and we saw this as an opportunity to develop better, more accurate devices. We sought to achieve improved tissue targeting while keeping the design as simple as possible for ease of use,” said Karp.

One area that is difficult to target with a standard needle is the suprachoroidal space (SCS), located between the sclera and choroid in the back of the eye.

The SCS has emerged as an important location for medication delivery but is challenging to inject precisely and safely because the needle must stop after transitioning through the sclera, which is less than 1 millimeter thick—about half as thick as a U.S. quarter.  Injecting this region carries a risk for retinal damage.

Other common tissue targets include the epidural space around the spinal cord, used for epidural anesthesia to ease pain during labor, the peritoneal space in the abdomen, and subcutaneous tissue between the skin and muscles, one of the most common sites of injection.

The i2T2 device was fabricated using a standard hypodermic needle and parts from commercially available syringes.

Different types of tissues have different densities and as a result exert different pressure and different resistance to penetrating objects. The intelligent injector harnesses these differences to enable needle movement in a tissue-specific manner.

The driving force, maximal forces and frictional force of the injector were tested using a universal testing machine. The feedback to the injector is instantaneous, which allows for better tissue targeting and minimal needle overshoot past the desired location.

The i2T2 was tested on tissue from three animal models to examine delivery accuracy in the suprachoroidal, epidural and peritoneal spaces, as well as subcutaneously.

Using both extracted tissue and an animal model, the researchers found that the i2T2 prevented overshoot injuries and precisely delivered medication to the desired location without any additional training or specialized technique.

In preclinical models, the researchers reported high coverage of contrast agent in the posterior section of the eye, indicating that the payload had been injected into the correct location.

The experiments also showed the injector could be used to safely deliver stem cells to the back of the eye, which can be useful for regenerative therapies.

“The stem cells injected into the SCS survived, indicating that the force of injection and the transit through the SCS were gentle on the cells,” said Kisuk Yang, a co-author and HMS research fellow in medicine at Brigham and Women’s.

“This should open the door to regenerative therapies for patients suffering from conditions of the eye and beyond,” said Yang.

“We have optimized a staple of modern medicine into a more intelligent device capable of more precise tissue targeting and with a better safety profile,” said first author Girish Chitnis, a former postdoctoral fellow in Karp’s laboratory. “We hope that we will be able to adapt this technology for human use in the very near future.”

“The i2T2 will help facilitate injections in difficult-to-target locations in the body,” said co-author Miguel González-Andrades, HMS research fellow in ophthalmology at Massachusetts Eye and Ear and collaborator with Karp’s lab.

“The next step toward human use is to demonstrate the utility and safety of the technology in relevant preclinical disease models,” he said.

Funding for this work was provided by the National Institutes of Health (grant R01HL095722) and Boston KPro.