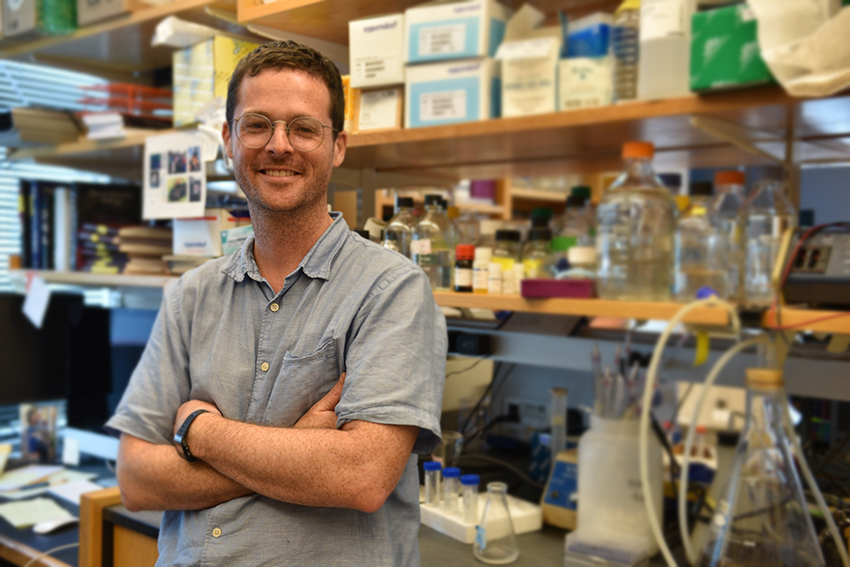 Born in Cambridge, Massachusetts, Ben Ewen-Campen began his scientific career studying wild birds in Alaska and beetle horns in Montana. After earning his PhD in organismic and evolutionary biology from Harvard University, he joined Harvard Medical School in 2014 as a research fellow in genetics in the lab of Norbert Perrimon.

Now, Ewen-Campen investigates development and cell signaling in fruit flies and helps create tools to probe the function of multiple genes at once. Last year, he was named a recipient of the HMS Outstanding Postdoc Fellow Award.

The achievement is all the more impressive considering Ewen-Campen has a second major commitment each day: participating in local politics. Motivated by the 2016 U.S. Presidential election, he ran for and won a seat on the Somerville City Council, then called the Board of Aldermen, in 2017.

Ewen-Campen sat down with Harvard Medicine News to talk about his research, public service and the ways the two jobs intersect and diverge.

HMS: You trained in biology and weren’t involved in politics until taking your seat on city council. When did you first think about running for office?

Ewen-Campen: As a kid I had this idea in my head about the ’60s that when we were carpet-bombing Cambodia, ordinary people snapped and took to the streets. I always wondered when that was going to happen for my generation. I was a freshman in college when the Iraq War happened. I was a senior in college when Hurricane Katrina happened. Huge, upsetting events. I was aware, I went to protests, but they didn’t jostle me out of my life path. Watching Trump get elected and watching the Democratic Party be unable to beat him was a radicalizing experience. People started getting together. We said, “We may not be able to influence things on a national scale, but let’s see what’s going on at the state and local levels.”

I got involved in meetings and protests around issues of affordable housing in Somerville. One night, I realized that despite the disconnect between residents and the city government, no one else was going to run for that council seat. It felt like I had a responsibility.

HMS: Does it still feel like duty more than anything else?

Ewen-Campen: I actually like it. Whereas I never felt very effective as a protester, I do feel useful in meetings. I know how to think about complicated problems, deliberate with people, try and convince people.

When I was campaigning, I would come to work here, rush home at 5 o’clock, change, and go knock doors till it got dark. I met hundreds of neighbors. I loved doing that. I love talking to people, getting them to open up, learning what they’re all about. That process convinced me I actually wanted to do this.

HMS: It seemed like a time when a lot of scientists started to consider becoming politically active.

Ewen-Campen: Yeah. A couple weeks after I decided I was going to run, the March for Science took place. I had a big sign saying, “I’m a scientist, and I’m running for office.” I had all these wonderful conversations. [HMS geneticist] George Church was one of the speakers, and he said something like, “All of you nerds need to start running for office.” The crowd roared.

I realized that broadly there’s support for scientists running for office. But I also imagined from the perspective of a PI some hesitation about a postdoc in your lab having a major additional commitment in their life, time-wise. Fortunately, everyone in the lab has been not only accommodating but unbelievably supportive.

HMS: How do you handle doing both jobs?

Ewen-Campen: You just do it. You work a lot. I’m in city council meetings most nights from 6 p.m. to 9 or 10 p.m. It’s exhausting. It’s brutal. But I think it’s really important. I have the support of my wife [Alex Feinstein, a project manager at the Dana Farber/Harvard Cancer Center]. I absolutely could not do it without that.

HMS: Were you drawn to politics by a need to defend science?

Ewen-Campen: It’s interesting. On the national scale, you have elected officials who are openly antiscience. In those districts, it’s critical to have people who “believe” in science, which is a stupid phrase. Whereas in Somerville, there’s no one who doesn’t believe in climate change or anything like that.

HMS: Are there similarities between being a city council member and being a scientist?

Ewen-Campen: The skills that have transferred the most have to do with communication. Taking a complex thing and boiling it down so that you can talk about it to people who aren’t steeped in it. That’s such a huge part of what we do as scientists.

I don’t go to city council and talk about Drosophila genetics, but a huge and fun part of the job is boiling down complicated issues. I pore over financial and policy documents and engage in really detailed deliberations.

HMS: Anything you’ve had to overcome or switch off at the end of your science day?

Ewen-Campen: Oh, yeah. The fundamental difference is that in politics, a core part of the job is conflict. You are always arguing and trying to balance folks who have strongly different views. We take a lot of hard votes where people I like and respect are on the other side. I had to learn that the goal of these meetings is not to get along. It’s to get the public policy outcome that achieves the greatest good for the most people.

HMS: How did you get into evolutionary and developmental biology?

Ewen-Campen: When I started college, I was interested in wildlife. I spent four summers up in Alaska, two in the Arctic National Wildlife Refuge, finding nests and counting eggs. I loved being outside all the time, but the science was frustrating because you can’t do experiments. These are rare, threatened species. The last thing you want to do is mess with them.

About halfway through college, I started studying developmental biology and was instantly hooked. You go from one cell to a human being. How do the cells know which part of the body they’re going to be? How do they turn on the right genes? It was endlessly interesting.

HMS: What are you working on now?

Ewen-Campen: One big project has to do with genetic redundancy. If you have two genes with overlapping functions and you knock out one of them, nothing happens. Part of it may be that we don’t know what we’re looking for, or the gene is important for some process that doesn’t happen in a lab context. It may also be that although you can knock out gene X, gene Y can compensate for it.

To study that, you need to be able to knock out two genes at once. You also need to be able to overexpress a gene. What’s been really exciting about the so-called CRISPR revolution is that it has made knocking out two or even three or four genes at a time technically trivial.

We’re building thousands and thousands of fly lines so that if a researcher anywhere in the world realizes that a gene they’re studying has a duplicate and they want to knock them both out, they’ll be able to order a fly and do that.

HMS: You mentioned you’re working on more than one project. What’s the other?

Ewen-Campen: I’m focusing on a particular developmental signaling pathway called the WNT pathway. Flies have seven WNTs. Humans have, I think, 19. We have reason to believe that there are distinct functions for all the WNTs as well as some overlapping functions. We’re teasing that apart.

It’s like another golden era of basic discovery. All these functions were totally invisible when you could only knock out one gene at a time, and now the combinatorial possibilities open up.

HMS: What do you hope to learn?

Ewen-Campen: Some of the exciting things have to do with stem cell regulation. WNTs are involved in the maintenance and differentiation of a lot of different populations of stem cells in the adult. I believe we’re going to learn about the complexities of that system, including how WNTs are spatially organized in physical structures called stem cell niches.

For me, the other fundamental question is, we know that having multiple WNT pathways predates the split between humans and jellyfish. There was one WNT gene, and it duplicated into many copies. Why have the copies been conserved for hundreds of millions of years? What is it about having multiple WNTs that allows you to increase the complexity of plants and animals?

HMS: How much does your city council involvement impact your work at HMS? Are the types of experiments that you do such that you can set them down at 5 o’clock and come back tomorrow and they’re okay?

Ewen-Campen: Well, no. I think that, had I not gotten involved in politics, I’d be going full steam on multiple projects. Instead, I’m going 9 to 5 on one-point-something projects.

It makes me focus on what I really need to get done, but it would be disingenuous to say that it doesn’t affect my scientific productivity. I think to really push the limits in biology, you would need to work harder than I currently can. I’m conscientious of that. The work in Somerville politics is important enough to me that it’s worth it to accept that this may mean I’m not going to go run a huge lab. I don’t know what the next step is. I’m following what seems important.

I feel at this point that it’s all hands on deck. Whatever your job is, you should also get involved with local politics. We’re trying to change the way our society is structured to be more fair. Local politics is a small part of a much larger movement. It’s a way to get more involved in how major decisions are made.

HMS: Part of something bigger?