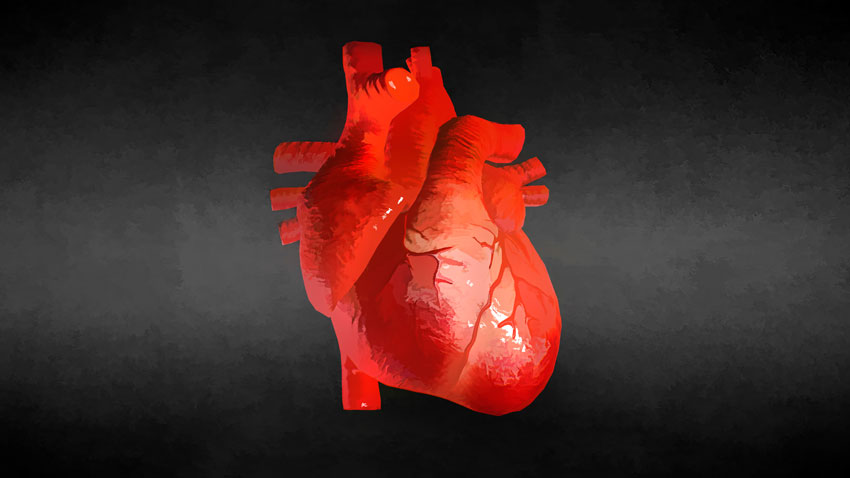 The heart’s ability to beat normally over a lifetime is predicated on the synchronized work of proteins embedded in the cells of the heart muscle.

Like a fleet of molecular motors that get turned on and off, these proteins cause the heart cells to contract, then force them to relax, beat after life-sustaining beat.

Now a study led by researchers at Harvard Medical School, Brigham and Women’s Hospital and the University of Oxford shows that when too many of the heart’s molecular motor units get switched on and too few remain off, the heart muscle begins to contract excessively and fails to relax normally, leading to its gradual overexertion, thickening and failure.

Results of the work, published Jan. 27 in Circulation, reveal that this balancing act is an evolutionary mechanism conserved across species to regulate heart muscle contraction by controlling the activity of a protein called myosin, the main contractile protein of the heart muscle.

The findings—based on experiments with human, mouse and squirrel heart cells—also demonstrate that when this mechanism goes awry it sets off a molecular cascade that leads to cardiac muscle over-exertion and culminates in the development of hypertrophic cardiomyopathy (HCM), the most common genetic disease of the heart and a leading cause of sudden cardiac death in young people and athletes.

“Our findings offer a unifying explanation for the heart muscle pathology seen in hypertrophic cardiomyopathy that leads to heart muscle dysfunction and, eventually, causes the most common clinical manifestations of the condition,” said senior author Christine Seidman, professor of genetics in the Blavatnik Institute at Harvard Medical School, a cardiologist at Brigham and Women’s Hospital and a Howard Hughes Medical Institute Investigator.

Importantly, the experiments showed that treatment with an experimental small-molecule drug restored the balance of myosin arrangements and normalized the contraction and relaxation of both human and mouse cardiac cells that carried the two most common gene mutations responsible for nearly half of all HCM cases worldwide.

If confirmed in further experiments, the results can inform the design of therapies that halt disease progression and prevent complications.

“Correcting the underlying molecular defect and normalizing the function of heart muscle cells could transform treatment options, which are currently limited to alleviating symptoms and preventing worst-case scenarios such as life-threatening rhythm disturbances and heart failure,” said study first author Christopher Toepfer, who performed the work as a postdoctoral researcher in Seidman’s lab and is now a joint fellow in the Radcliffe Department of Medicine at the University of Oxford.

Some of the current therapies used for HCM include medications to relieve symptoms, surgery to shave the enlarged heart muscle or the implantation of cardioverter defibrillators that shock the heart back into rhythm if its electrical activity ceases or goes haywire. None of these therapies address the underlying cause of the disease.

Imbalance in the motor fleet

Myosin initiates contraction by cross-linking with other proteins to propel the cell into motion. In the current study, the researchers traced the epicenter of mischief down to an imbalance in the ratio of myosin molecule arrangements inside heart cells. Cells containing HCM mutations had too many molecules ready to spring into action and too few myosin molecules idling standby, resulting in stronger contractions and poor relaxation of the cells.

An earlier study by the same team found that under normal conditions, the ratio between “on” and “off” myosin molecules in mouse heart cells is around 2-to-3. However, the new study shows that this ratio is off balance in heart cells that harbor HCM mutations, with disproportionately more molecules in active versus inactive states.

In an initial set of experiments, the investigators analyzed heart cells obtained from a breed of hibernating squirrel as a model to reflect extremes in physiologic demands during normal activity and hibernation. Cells obtained from squirrels in hibernation—when their heart rate slows down to about six beats per minute—contained 10 percent more “off” myosin molecules than the heart cells of active squirrels, whose heart rate averages 340 beats per minute.

“We believe this is one example of nature’s elegant way of conserving cardiac muscle energy in mammals during dormancy and periods of deficient resources,” Toepfer said.

Next, researchers looked at cardiac muscle cells from mice harboring the two most common gene defects seen in HCM. As expected, these cells had altered ratios of “on” and “off” myosin reserves. The researchers also analyzed myosin ratios in two types of human heart cells: Stem cell-derived human heart cells engineered in the lab to carry HCM mutations and cells obtained from the excised cardiac muscle tissue of patients with HCM. Both had out-of-balance ratios in their active and inactive myosin molecules.

Further experiments showed that this imbalance perturbed the cells’ normal contraction and relaxation cycle. Cells harboring HCM mutations contained too many “on” myosin molecules and contracted more forcefully but relaxed poorly. In the process, the study showed, these cells gobbled up excessive amounts of ATP, the cellular fuel that sustains the work of each cell in our body. And because oxygen is necessary for ATP production, the mutated cells also devoured more oxygen than normal cells, the study showed. To sustain their energy demands, these cells turned to breaking down sugar molecules and fatty acids, which is a sign of altered metabolism, the researchers said.

“Taken together, our findings map out the molecular mechanisms that give rise to the cardinal features of the disease,” Seidman said. “They can help explain how chronically overexerted heart cells with high energy consumption in a state of metabolic stress can, over time, lead to a thickened heart muscle that contracts and relaxes abnormally and eventually becomes prone to arrhythmias, dysfunction and failure.”

Treating both mouse and human heart cells with an experimental small-molecule drug restored the myosin ratios to levels comparable to those in heart cells free of HCM mutations. The treatment also normalized contraction and relaxation of the cells and lowered oxygen consumption to normal levels.

The drug, currently in human trials, restored myosin ratios even in tissue obtained from the hearts of patients with HCM. The compound is being developed by a biotech company; two of the company’s co-founders are authors on the study. The company provided research support for the study.

In a final step, the researchers looked at patient outcomes obtained from a database containing medical information and clinical histories of people diagnosed with HCM caused by various gene mutations. Comparing their molecular findings from the laboratory against patient outcomes, the scientists observed that the presence of genetic variants that distorted myosin ratios in heart cells also predicted the severity of symptoms and likelihood of poor outcomes, such as arrhythmias and heart failure, among the subset of people that carried these very genetic variants.

What this means, the researchers said, is that clinicians who identify patients harboring gene variants that disrupt normal myosin arrangements in their heart muscle could better predict these patients’ risk of adverse clinical course.

Relevant disclosures:  Researchers Christine Seidman and Jonathan Seidman are founders and own shares in MyoKardia, a company developing therapies that target the heart muscle, including the chemical compound used in the experiments.