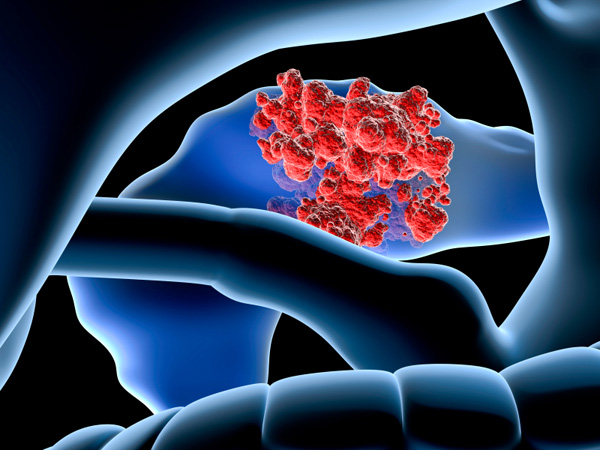 A nanoparticle drug-delivery system tested in animal models that combines two complementary types of anticancer treatment could improve outcomes for patients with pancreatic cancer and other highly treatment-resistant tumors while decreasing toxicity.

In Nature Nanotechnology, a team of Harvard Medical School researchers based at the Wellman Center for Photomedicine at Massachusetts General Hospital described how they deployed a nanomedicine that combines photodynamic therapy—the use of light to trigger a chemical reaction—with a molecular therapy drug targeted against common treatment-resistant pathways.

In an animal model, the dual approach reduced a thousand-fold the dosage of the molecular therapy drug required to suppress tumor progression and metastatic growth.

“A broad challenge in cancer treatment is that tumor cells use a network of cellular signaling pathways to resist and evade treatment,” said co-lead author Bryan Spring, HMS research fellow in dermatology at Mass General when the work was done and now an assistant professor of physics at Northeastern University. “The new optically active nanoparticle we have developed is able both to achieve tumor photodamage and to suppress multiple escape pathways, opening new possibilities for synchronized multidrug combination therapies and tumor-focused drug release.”

Photodynamic therapy (PDT) uses chemicals called photosensitizers that are activated by exposure to specific wavelengths of light to release reactive molecules that can damage nearby cells. In cancer treatment, PDT damages both tumor cells and their blood supply, directly killing some tumor cells and starving those that remain of nutrients. But as with many other types of treatments, treating tumors with PDT can stimulate molecular signaling pathways that support tumor survival.

The nanomedicine developed by the Wellman-based team is made up of nanoliposomes—spherical lipid membrane structures— enclosing a polymer nanoparticle that has been loaded with a targeted molecular therapy drug. The lipid membrane of these photoactivable multi-inhibitor nanoliposomes contains an FDA-approved photosensitizer that is a benzoporphyrin derivative. The nanoparticles are loaded with a molecular therapy drug called cabozantinib.

Cabozantinib inhibits two important treatment escape pathways, VEGF and MET. While it has U.S. Food and Drug Administration approval to treat thyroid cancer and is being tested against pancreatic cancer and several other tumors, it is quite toxic, requiring dose restrictions or treatment interruption. Because cabozantinib is delivered to every part of the body and not just to the tumor when administered orally, enclosing it in the nanoliposomes could reduce toxicity by confining its action to the area of the tumor.

Led by Tayyaba Hasan, HMS professor of dermatology at Mass General, the investigators first confirmed in laboratory experiments that exposing the nanoliposomes to near-infrared light both activated the antitumor action of the benzoporphyrin derivative and, by disrupting the lipid membrane envelope, released the cabozantinib-containing nanoparticles.

In two mouse models of pancreatic cancer, a single treatment consisting of intravenous delivery of the nanoliposomes followed by localized delivery of near-infrared light to the tumor site via optical fibers resulted in significantly greater reduction in tumor size than did either treatment with cabozantinib alone or PDT with the benzoporphyrin derivative alone.

The nanoliposome treatment also was significantly more effective than treatment with both cabozantinib and benzoporphyrin derivative-PDT given as separate agents. Along with prolonged tumor reduction, nanoliposomes treatment also almost completely suppressed metastasis in the mouse models.

While the VEGF treatment-escape pathway is known to be induced and sensitized by PDT, the research team found that PDT also induces signaling via the MET pathway. The ability to deliver cabozantinib and PDT almost simultaneously allowed the two therapeutics to be “at the right place at the right time” to cut off the rapid initiation of escape signaling that usually follows PDT.

This effect was reflected in how much more efficient nanoliposome-delivered treatment was in the animal models compared to either treatment alone, since PDT simultaneously sensitized the tumor to the second therapy. Delivery of cabozantinib directly to the tumor site produced these promising results at a dosage level less than one-thousandth of what is used in oral therapy, with little or no toxicity.

Right now we can say this approach has tremendous potential for patients with locally advanced pancreatic cancer for whom surgery is not possible,” said Hasan. “In our phase I/II clinical studies with PDT alone, tumor destruction was achieved in all cases, and we’ve seen at least one case where PDT alone induced enough tumor shrinkage to enable follow-up surgery.”

The more robust tumor reduction and suppression of escape pathways possible with the photoactivable multi-inhibitor nanoliposomes might enable curative surgery or improve the outcome of chemotherapy to enhance patient survival, Hasan said.

“While we are encouraged by these results, this combination in a new nanoconstruct needs more validation before becoming a clinical treatment option,” Hasan said.