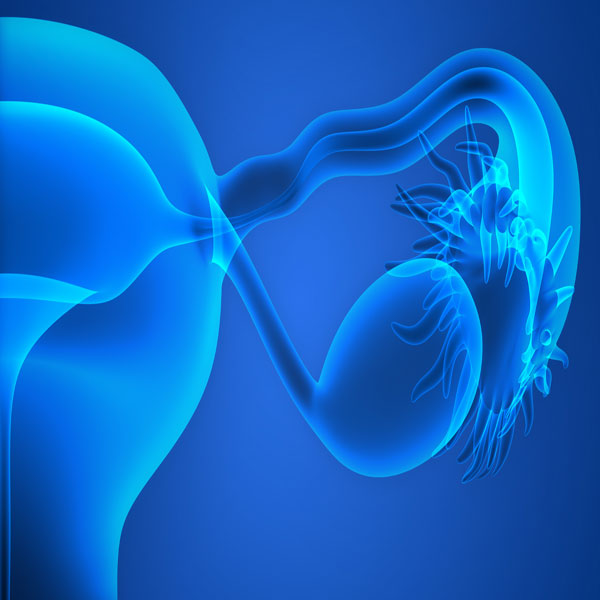 Scientists report that a naturally occurring hormone that plays a role in fetal development may help protect the ovaries from chemo damage.
Photo credit: Magicmine/Getty Images

A naturally occurring hormone that plays an important role in fetal development may be the basis for a new type of reversible contraceptive that can protect ovaries from the damage caused by chemotherapy drugs.

In their report receiving online publication in PNAS, a team from the Pediatric Surgical Research Laboratories in the Harvard-affiliated Massachusetts General Hospital (MGH) Department of Surgery describes using Mullerian Inhibiting Substance (MIS) to halt, in a mouse model, the early development of the ovarian follicles in which oocytes mature, an accomplishment that protects these primordial follicles from chemotherapy-induced damage.

“MIS has long been suspected as an inhibitor of the initial stages of follicular development, but the complete blockade of the process was unexpected and opened up a number of new applications for the hormone,” said corresponding author David Pepin, an assistant professor of Surgery at Harvard Medical School (HMS).

“Because most of what we know about female reproduction is focused on the late stages of follicle maturation, our current therapies – including contraceptive drugs – are all targeted at those processes.

The ability to target earlier stages and potentially maintain the larger pool of quiescent oocytes called the ovarian reserve not only could maintain fertility during chemotherapy but also could be applied to modern fertility treatments,” he said.

During embryonic development, MIS is secreted by the testes of male embryos to prevent the maturation of structures that would give rise to female reproductive organs.

Patricia Donahoe, director of the Pediatric Surgical Research Laboratories and a co-author of the PNAS paper, has been investigating the potential use of MIS to treat ovarian cancer and other reproductive tumors for several years.

As part of that continuing work, Pepin made the surprising observation that overexpression of MIS in female animals completely blocked the maturation of follicles, keeping them at the inactive, primordial stage and rendering the animals infertile.

Chemotherapy’s anti-cancer effects depend on its ability to damage rapidly growing cells, including cells in maturing ovarian follicles. But chemotherapy is also believed to accelerate the activation of primordial follicles, essentially using up the ovarian reserve over a matter of months instead of years.

The idea that ovarian suppression could preserve fertility in women undergoing chemotherapy is not new, but the ability to halt activation of primordial follicles during chemotherapy was not previously possible.

Current hormonal contraceptives act at later stages, after the follicle has been committed to either grow or perish, so the unique action of MIS in maintaining follicles at the primordial stage offered intriguing new possibilities.

In a series of experiments with female mice, the research team first showed that increasing MIS levels either by twice-daily injection of the purified protein or by gene therapy led to a gradual but significant decrease in the number of growing follicles, leading after several weeks to an almost complete lack of growing follicles but maintaining a consistent level of primordial follicles.

Halting MIS treatment, either by discontinuing the injections or by transplanting follicle-depleted ovarian tissues from gene-therapy treated mice into untreated control animals, led to resumption of follicle development in as little as 12 days, indicating that the effect is reversible.

“We have just begun to scratch the surface of the implications of MIS for reproductive and overall health,” Pepin said.

“Its unique mechanism of action means it could be useful in treating many conditions that cause primary ovarian insufficiency or premature menopause. Long-term contraceptive use would probably require replacement of hormones such as estrogen to prevent the side effects of ovarian shutdown, which would be less of a concern for short-term treatment during chemotherapy. Gene therapy with MIS could also offer a nonsurgical alternative to veterinary sterilization procedures,” Pepin said.

Pepin’s team is now investigating the quality of the oocytes preserved by MIS treatment after chemotherapy, along with elucidating the molecular mechanisms by which MIS inhibits follicle activation, which may lead to the development of small-molecule oral alternatives.

The researchers have also formed a company, Provulis LLC, to develop clinical applications of MIS treatment and are planning clinical trials.