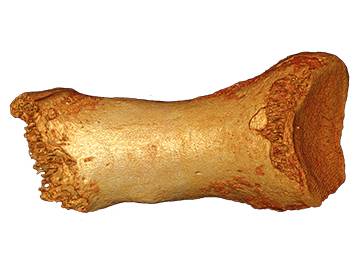 An international research team has completed the first high-quality genome sequence of a Neanderthal, deepening knowledge about the genetic connections and population histories of ancient and modern humans.

The results of a study published online Dec. 18 in Nature indicate that our ancestors commonly interbred with other types of ancient humans after their evolutionary branches diverged. The authors also identify a list of DNA variants that distinguish modern from extinct humans and suggest that our family tree may need to be adjusted to accommodate a mysterious group of genetically distinct humans.

“This study sheds new light on the deep relationships and splits amongst present-day human populations and our archaic relatives,” said Harvard Medical School genetics professor David Reich, a senior co-author of the study along with Svante Pääbo of the Max Planck Institute for Evolutionary Anthropology in Germany and Montgomery Slatkin of the University of California, Berkeley.

Pääbo coordinated the sequencing and analysis of the genome, while Reich and Slatkin led the parts of the study that analyzed population relationships. Key HMS analysts included postdoc Sriram Sankararaman and staff scientists Nick Patterson, Heng Li and Swapan Mallick.

“This list of simple DNA sequence changes that distinguish all humans today from our nearest extinct relatives is comparatively short,” said Pääbo. “I believe that in it hide some of the things that made the enormous expansion of human populations and human culture and technology in the last 100,000 years possible.”

The study builds on previous research by the same team that produced a first-pass Neanderthal genome, revealed a new group of archaic humans they named Denisovans and showed that both Neanderthals and Denisovans exchanged genetic material with the ancestors of modern humans.

For the current study, the researchers sequenced the genome of a more than 50,000-year-old female Neanderthal from Siberia with a quality as high as today’s medical sequencing of people and compared it to the genomes of a Denisovan and 25 present-day humans.

“What emerges is a picture where many tens of thousands of years ago as our ancestors migrated out of Africa, these diverse groups met and mixed and left their traces in one another’s genomes, including ours,” said Reich, who is also an associate member of the Broad Institute and an investigator at the Howard Hughes Medical Institute.

The team was also able to refine the estimate of how much DNA in people outside Africa can be traced to Neanderthals to between 1.5 and 2.1 percent.

“These results show that mixing was the rule, not the exception, among humans, and that it has shaped our biology,” said Reich.

History in our DNA

Producing the high-quality Neanderthal genome and conducting the comparisons with other ancient humans led the team to numerous new insights.

First, the researchers learned that the Neanderthal woman’s parents were closely related to each other. In fact, she came from a population with high inbreeding and exceptionally low genetic variation.

“This is about the lowest variability we’ve seen in the animal or plant kingdom—so low that one wonders if it was biologically sustainable,” said Reich.

Second, the team’s analyses helped fill in more of the story of how archaic human groups interacted with one another. The Denisovan bone, for example, contained DNA segments that came from a Neanderthal, indicating that populations of both groups lived in the same geographic area for a period of time.

The study also provided further insight into the history of Neanderthal and Denisovan gene flow into humans. It seems that the Neanderthals who contributed genes to modern humans are more closely related to a Neanderthal from the Caucasus than to Neanderthals found in Europe or Central Asia.

In addition, the team detected trace amounts of Denisovan DNA for the first time in modern people who live in mainland Asia. Previously, Denisovan DNA had been found only in indigenous people of New Guinea, Australia and the Philippines.

The authors of the study propose that there were not three but at least four groups of highly diverged ancient humans living just 70,000 years ago: Neanderthals, modern humans and two distinct types of Denisovans.

However, the story doesn’t end there. Branches of our family tree may need to be adjusted for a second reason.

In their previous studies, Pääbo and colleagues showed that Neanderthals and Denisovans are more closely related to each other than either is to modern humans from Africa (whose ancestors didn’t mix much or at all with them). Now, the researchers have found that Neanderthals are actually “a little closer” genetically to Africans than Denisovans are—and it can’t be explained by gene flow between ancient humans and Neanderthals.

“That means it’s not as simple a history as we thought,” said Reich. “We have evidence supporting an unknown, truly archaic population that contributed genetic material to Denisovans and that separated from Neanderthals and modern humans about 1.9 to 1.4 million years ago, prior to their separation from each other.”

“It’s been such a privilege to work on material from these ancient humans,” Reich added. “It’s incredible that Svante Pääbo and his group were able first to extract DNA out of these ancient remains, and then to sequence their DNA to a high degree of accuracy. It’s a huge surprise and an amazing, lucky thing for science.”

This work was supported by the National Science Foundation (1032255), the National Institutes of Health (GM100233, HG006283, GM40282), the Paul G. Allen Family Foundation and the Presidential Innovation Fund of the Max Planck Society.