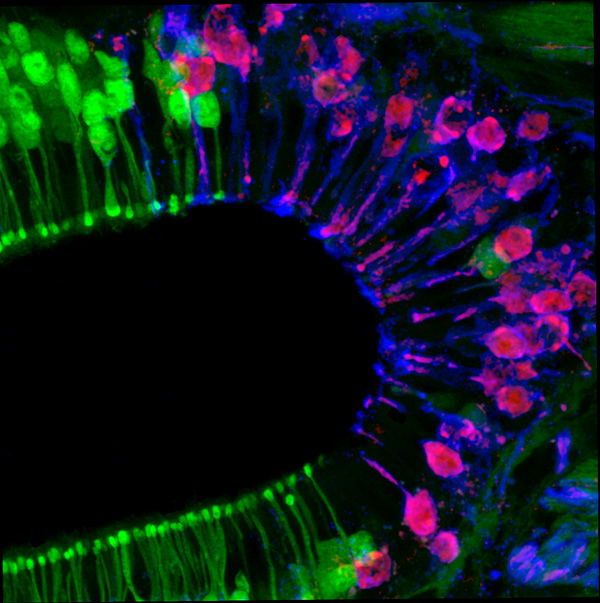 In the ‘olfactory necklace,’ mouse neurons sense odors in a new way that may have more in common with taste than smell. Image: Datta lab/Cell

In the ‘olfactory necklace,’ mouse neurons sense odors in a new way that may have more in common with taste than smell. Image: Datta lab/Cell

Mammals have an exquisitely tuned sensory system that tells them whether they are smelling an orange or a rose. Like keys on a piano keyboard, each component of an odor blend strikes only one chord of olfactory neuron activation. These chords are combined to form a melody that is “heard” in the brain as distinctly citrusy or sweet and flowery.

More than 25 years of neurobiology research has provided us with the understanding that there is a one-to-one-correspondence between the individual smells detected by an olfactory sensory neuron and the chemical receptor it expresses. This proprietary linking explains how distinct information about odors travels along parallel sensory pathways to the brain, and enables the brain to identify and distinguish different smells in the world.

That understanding included the mechanism behind this correspondence: the activity of seven-transmembrane G-protein coupled receptors (GPCRs) in sensory neurons. As their name indicates, these chemoreceptors span a cell membrane seven times. They are the source of a biochemical signaling cascade inside the neuron that reaches the brain to say “orange” or “rose” or any other odor one can detect.

Or at least this seemed to be the case.

Harvard Medical School scientists have uncovered a new and different way that some odors are sensed in what is known as the “olfactory necklace,” a subsystem of sensory neurons whose axons encircle the olfactory bulb, which they explored in mice. The new class of chemoreceptors they discovered defines an alternative mechanism for odor detection and a novel logic for mammalian olfaction that has more in common with taste than with smell.

“We found a totally different way of detecting smells, and a family of receptors that had not been previously characterized.”—Paul Greer

Their findings, from a team led by Sandeep Datta, HMS assistant professor of neurobiology, are published May 26 in Cell.

“We found a totally different way of detecting smells, and a family of receptors that had not been previously characterized,” said Paul Greer, HMS research fellow in neurobiology and co-first author of the paper.

“We think this new olfactory system is set up in a way that alerts the brain to the presence of some class of chemical stimuli, rather than giving a precise pattern like the rest of the olfactory system.”—Daniel Bear

“We think this new olfactory system is set up in a way that alerts the brain to the presence of some class of chemical stimuli, rather than giving a precise pattern like the rest of the olfactory system,” said Daniel Bear, a PhD student in the Harvard Program in Neuroscience and co-first author of the paper.

What types of odors could be so crucial as to warrant an alert system?

The HMS researchers already knew that cells in the olfactory necklace have receptors that detect carbon dioxide, a naturally aversive stimulus for the mouse. They wondered if such innate detectors had evolved to spur important behaviors such as avoiding threats.

This olfactory alert system appears to have an ancient origin but continue to have value for animals. Rather than discriminating between odors, these necklace receptors may instead detect a variety of odors that trigger particular innate behaviors.

According to Datta, finding these receptors required “fishing without a hook.”

The scientists searched for necklace olfactory receptors using genetic screens that identified molecules that could be chemoreceptors. Surprisingly, they found no GPCRs. Without that hook, which had been used to uncover all currently known mammalian odorant receptors, they instead looked for proteins that spanned the membrane, reaching out of the cell to detect odors and into the cell to communicate a message that would serve as a signal to the brain. In addition, they speculated that necklace chemoreceptors would be encoded by genes that evolved quickly.

When the researchers landed likely chemoreceptor candidates, they tested them to see if they could detect a variety of chemicals. To their surprise, mouse pheromones and long-chain, unsaturated fatty acids—a major ingredient in sunflower seeds, nuts and other requirements of the mouse diet—produced the most robust responses.

“I think the odorant ligands that we found represent some of the features these receptors have evolved to detect,” said Bear. “We don’t know for sure what the biologically relevant sources of these molecules are, but that’s one of the things that we’re interested in figuring out now.”

Datta said it remains unknown whether the system they discovered is a general-purpose detector of chemical cues; that is, it detects cues inside and outside the body. He is also interested in understanding how the brain interprets information that’s coming toward it from the olfactory necklace system.

“This system violates the logic used by the rest of the olfactory system, so the brain must be doing something special with the information.”—Sandeep Datta

“This system violates the logic used by the rest of the olfactory system, so the brain must be doing something special with the information,” he said. “We don’t know what this is, but we are very excited to peer into the brain and figure that out.”

Because this receptor family is also present in humans, this work suggests that the newly identified receptors may mediate chemical communication between people and the environment, an intriguing possibility that is also being investigated.