Mentor for the Ages 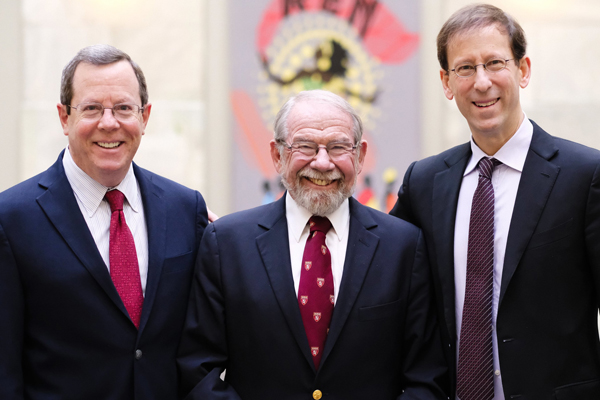 Dean for Medical Education Edward M. Hundert, MD ’84, announced April 6 that the Josiah Macy Jr. Foundation, which is the only national foundation dedicated solely to improving the education of health professionals, has established the George E. Thibault Academy Professorship at Harvard Medical School.

Established with a gift of $2 million, the professorship honors a decade of impactful leadership of the Foundation by President George E. Thibault, MD ’69, who will step down later this year.

A fixture in the fields of health care and medical education, Thibault taught and mentored medical students, residents, fellows, and junior faculty as a leader at Harvard Medical School and its renowned affiliated hospitals for four decades. Among his most notable accomplishments is establishing the Academy at HMS in 2001 to recognize outstanding teachers and to promote innovations in medical education.

“One of the most meaningful things we have in academia is an endowed chair for a beloved mentor whose name can ripple through the generations because of the impact they’ve had and continue to have through their mentees. George, for all the people you mentioned as nurturing you, there are 10 who have looked to you, and the ripples will go on forever,” said Hundert.

David A. Hirsch, associate director of the Academy and director of the HMS Academy Fellowship in Medical Education, will be the inaugural incumbent of the professorship, which will be celebrated formally on Oct. 30.

“I can’t think of anything that makes me happier than having a permanent presence here at Harvard Medical School, while supporting David and the mission of the Academy. The professorship exists in perpetuity, which to me means the Academy will exist in perpetuity. That’s a very important statement of values for the Medical School,” said Thibault.

Thibault’s remarks followed his presentation at the Medical Education Grand Rounds, where he reflected on his career as a medical educator. He shared stories about his father, who was a general practitioner in Chittenango, New York, and about his own education and various roles at Brigham and Women’s Hospital, Massachusetts General Hospital, Veterans Affairs Boston Healthcare System, and HMS. He ended his remarks by reflecting on lessons learned from his tenure at the Macy Foundation and his advice for those who want to pursue a career as a medical educator.