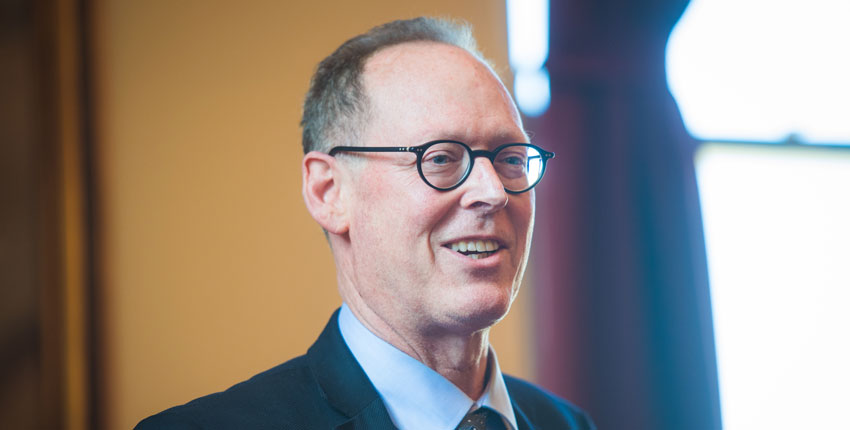 Paul Edward Farmer, a pioneering Harvard Medical School global health physician and medical anthropologist who dedicated his life to improving and providing health care in some of the world’s most underserved countries and communities, died in his sleep from an acute cardiac event in Rwanda on Feb. 21. He was 62.

Paul Farmer and Jim Yong Kim discuss their work for global health equity at a preview of a new documentary chronicling their work.

“Paul dedicated his life to improving human health and advocating for health equity and social justice on a global scale,” said HMS Dean George Q. Daley in a letter to the HMS community. “I am particularly shaken by his passing because he was not only a consummate colleague and a beloved mentor, but a close friend. To me, Paul represented the heart and soul of Harvard Medical School.”

“Paul Farmer’s loss is devastating, but his vision for the world will live on through Partners In Health,” said PIH CEO Sheila Davis in a statement. Partners In Health is a global public health organization that Farmer co-founded. “Paul taught all those around him the power of accompaniment, love for one another, and solidarity. Our deepest sympathies are with his family.”

Farmer was a renowned humanitarian who worked hand in hand with local governments and organizations around the world, including those in many rural and underserved communities, to establish partnerships to help build hospitals, train medical workers, and establish community clinics in remote, impoverished areas where residents would otherwise have had little hope of any kind of health care.

He was the chief strategist and co-founder, with Jim Yong Kim, Ophelia Dahl, and Todd McCormack, of the social and health organization Partners In Health. Farmer also served as the United Nations Special Adviser to the Secretary-General on Community-based Medicine and Lessons from Haiti, a country where he first worked as a volunteer while still an undergraduate and where he spent much of his life.

Nobel Peace Prize laureate Archbishop Desmond Tutu called Farmer "one of the great advocates for the poorest and sickest of our planet.”

Born in 1959 in North Adams, Massachusetts, Farmer grew up in Florida with his parents and five siblings, living at times in a school bus converted into a mobile home and on a boat. He attended Duke University on a Benjamin N. Duke Scholarship and received his MD and his PhD in 1990 from Harvard University.

He specialized in infectious diseases and was the author of more than 200 scientific papers.

Farmer began his life’s work as a college volunteer in Haiti in 1983, working with dispossessed farmers in the country’s Central Plateau, where he was struck by the level of care available to impoverished residents. There, he served for 10 years as medical director of L’Hôpital Bon Sauveur, a charity hospital.

Farmer once told an interviewer, “There is nothing I like more than building a hospital—that’s what I call a good pastime. ...That inspires me.”

Farmer’s work has become a model for health care delivery in underresourced communities worldwide; it laid the groundwork for developing the science of global health delivery implementation.

In 1987, Farmer co-founded Partners In Health, the Boston-based international non-profit that provides direct health care services, leading research, and advocacy on behalf of those who are sick and living in poverty.

Under Farmer’s leadership, Partners In Health built a hospital in Haiti after an earthquake rocked the country in 2010, fought multidrug-resistant tuberculosis in Peru and around the globe, assisted Liberia and Sierra Leone in tackling Ebola, worked to stop the Zika virus, and is still dedicated to battling emerging new health threats.

Farmer’s work with Partners In Health was described in a 2003 book by Pulitzer Prize-winning author Tracy Kidder, Mountains Beyond Mountains: The Quest of Dr. Paul Farmer, a Man Who Would Cure the World.

The book followed Farmer from Harvard to Haiti, Peru, Cuba, and Russia, describing, among other things, how he exported treatment for multidrug-resistant tuberculosis from Haiti to Peru and then to Siberia, achieving cure rates comparable to those in the United States.

Because of Farmer’s efforts, Haiti saw higher rates of vaccination and lower rates of infant mortality and malnourishment in areas where PIH was active.

Farmer’s work with his colleagues has also been chronicled in the Bulletin of the World Health Organization, The Lancet, the New England Journal of Medicine, Clinical Infectious Diseases, and Social Science and Medicine.

Farmer wrote extensively on health, human rights, and the consequences of social inequality. His books include Fevers, Feuds, and Diamonds: Ebola and the Ravages of History; AIDS and Accusation; Haiti after the Earthquake; Infections and Inequalities, The Modern Plagues; To Repair the World: Paul Farmer Speaks to the Next Generation, and A Path Out of Poverty. In addition, Farmer was co-editor of Women, Poverty, and AIDS, The Global Impact of Drug-Resistant Tuberculosis, and Global Health in Times of Violence.

Farmer was a recipient of numerous honors, including the 2020 Berggruen Prize for Philosophy and Culture, the Margaret Mead Award from the American Anthropological Association, the American Medical Association’s Outstanding International Physician (Nathan Davis) Award, a John D. and Catherine T. MacArthur Foundation Fellowship and, with his PIH colleagues, the Hilton Humanitarian Prize. He was a member of the National Academy of Medicine and of the American Academy of Arts and Sciences.

He is survived by his wife, Didi Bertrand Farmer, and their three children.

HMS is planning a community memorial gathering via Zoom and will share details as soon as they are confirmed.

To make a gift in memory of Dr. Farmer, visit our giving page, and select “Other” in the dropdown menu. Please indicate your gift should be directed to the Chairs’ Opportunity Fund in memory of Dr. Paul Farmer.