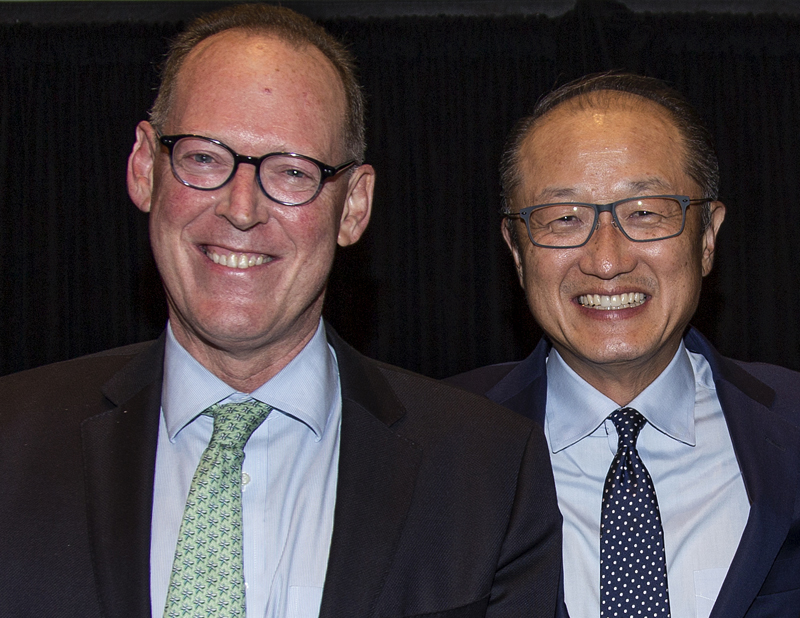 The story begins with a group of young idealists who set out 30 years ago to save as many lives as they could in a tiny health clinic in impoverished Haiti.

That single struggling clinic grew into a global movement, and the young idealists became leaders in global health and development.

The action unfolds in “Bending the Arc,” a documentary about the history of Partners In Health, an organization devoted to providing medical care for the world’s poorest people.

At a special preview screening of the film at Harvard Medical School on Sept. 19, two of PIH’s founders, HMS alumni Jim Yong Kim, president of the World Bank Group, and Paul Farmer, Kolokotrones University Professor at Harvard and head of the HMS Department of Global Health and Social Medicine, joined George Q. Daley, dean of HMS, for a discussion of the film and of their life’s work.

“Paul and Jim are absolute forces of nature, unleashing their unmatched energy, their hard-won wisdom and their deeply held sense of the value of all human life to insist tirelessly that world-class health care is not just a right but a real possibility for all people everywhere,” said Daley.

“These two titans of global health have helped transform our notions of what is possible in modern medicine,” Daley added.

Bending the Arc Trailer from Tugg on Vimeo.

The film illustrates how Farmer, Kim and their colleagues at PIH and its sister organizations around the world have accomplished what many public health experts once believed was impossible.

It shows them delivering world-class care for complex diseases, such as multidrug resistant tuberculosis and HIV, in unimaginably impoverished settings and launching new teaching and training programs to nurture the next generation of global health workers.

Also showcased in the film is how PIH  and its allies are  building surgical care facilities and biomedical research programs that push the boundaries of clinical care and deepen our fundamental understanding of disease.

Beyond the world of medicine and biological science, Farmer, Kim and their colleagues have also worked on changing global health policy and on addressing the social and economic roots of health disparities.

Wherever this work has taken them, both emphasized that their work is united by several common themes—nurturing hope and rejecting cynicism and despair—and by a common way of working that Farmer called a “tag team approach.”

They noted that this collaborative approach takes many forms, with many different kinds of partners.

It might mean training a corps of community health workers in a given country to accompany their chronically ill neighbors on the journey from sickness to health.

It might involve working with faculty members at academic medical centers like HMS and its affiliated hospitals to train students, to create new knowledge through research, and find the best ways to take care of sick people.

It also might mean working with international development organizations like the World Bank Group, using the tools of the wealthy to invest in the health and education of the poor.

As one example, Kim said, after witnessing the global community’s slow-motion response to the West African Ebola pandemic in 2014, he set out to create an innovative financial instrument that would allow for the rapid disbursement of emergency funds in the event of another outbreak. The result was the Pandemic Emergency Financing Facility (PEF), a kind of insurance policy against viral outbreaks in developing countries, he said.

There’s so much work that needs to be done and there are many different ways to make a contribution, Farmer said, adding that, “You should do the part of this work that you most love to do,” Farmer told audience members.

In his work at the World Bank, Kim thinks about health equity as part of a larger project of human solidarity, he said. He sees many threats to global peace and shared prosperity—global warming, lack of education and health care and an increasing trend toward isolating nationalism, but maintains that there is only one way forward.

“The only solution is a radically egalitarian approach,” Kim said.

If you’re building a program for maternal and child health, Kim said, the guiding question shouldn’t be what can we afford; it should be what would I want for my daughter, my wife or my sister.

The film, directed by Kief Davidson and Pedro Kos, premiers in New York City on Oct. 6, and debuts in select theaters in Boston, Washington, D.C., and Los Angeles on Oct. 13.