Listening in on Bug-Gut Chatter 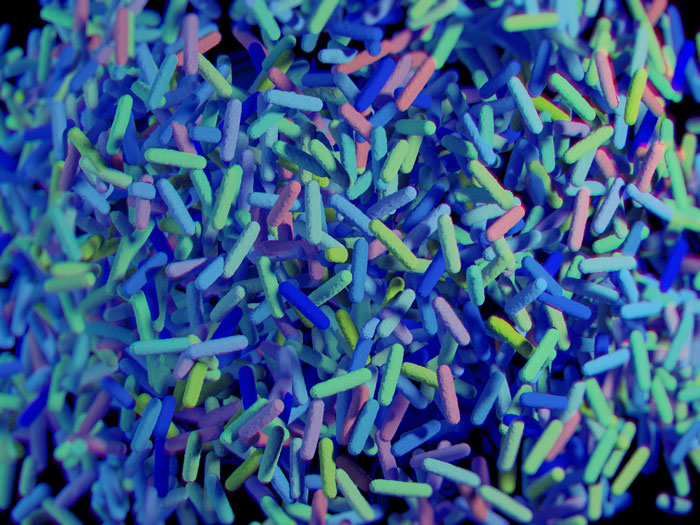 HMS scientists have been able to monitor the "crosstalk" between intestinal microbes and the immune system.
Photo: Getty Images, ChrisChrisW

The human gut is home to some 100 trillion bacteria, comprising between 250 and 500 species. This astounding array of organisms, collectively known as the gut microbiome, is a powerful regulator of disease and health and has been implicated in conditions ranging from inflammatory bowel disease to multiple sclerosis.

Gut microbes engage in an intricately choreographed conversation with the immune system, stimulating it just enough to keep disease-causing invaders at bay, while at the same time reining it in so it doesn’t mistakenly launch an attack on the body.

So far, scientists have been able to listen to bits and pieces of the conversation between bacteria and individual immune cells or a handful of genes.

Now, for the first time, scientists from Harvard Medical School have managed to “listen in” on the crosstalk between individual microbes and the entire cast of immune cells and genes expressed in the gut.

The experiments, published Feb. 16 in Cell, provide a blueprint for identifying important microbial influencers of disease and health and can help scientists develop precision-targeted treatments.

Past research has looked at links between disease and the presence or absence of certain classes of bacteria in the gut. By contrast, the HMS team homed in on one microbe at a time and its effects on nearly all immune cells and intestinal genes, an approach that offers a more precise understanding of the interplay between individual gut microbes and their hosts. Beyond that, the team said, the approach could help scientists screen for molecules or bacterial strains that can be used therapeutically to fine-tune certain immune responses.

“We set out to map out interactions between bacteria and the immune system in the hope that this could eventually lead to the development of an apothecary of agents tailored to modulate the immune system selectively and precisely,” said senior investigator Dennis Kasper, professor of medicine and microbiology and immunobiology at HMS.

Such an apothecary, Kasper added, is years away, but the results set the stage for therapeutic discoveries.

For the work, Kasper’s microbiology team collaborated with immunologists from the HMS lab run by Diane Mathis and Christophe Benoist.

“This was an example of true crosspollination expertise and knowledge,” said Mathis, a professor of microbiology and immunobiology at HMS. “This research took place at the intersection of microbiology, immunology and genetics, which is illustrative of the complex and synergistic ways in which multiple organs and organ systems operate in the body.”

Harnessing naturally occurring microbes or molecules and using them to modulate immune response holds the promise of providing better precision-targeted immune therapies. Such therapies, the researchers say, carry the promise of optima benefits with minimal to no toxic side effects.

“Because we observed microbial effects mainly in the gut, we believe that a microbe-based therapy would avoid the collateral damage seen with drugs that wipe out classes of immune cells across the body,” said Benoist, a professor of microbiology and immunobiology at HMS.

Additionally, he said, modulating the gut immune system may also have broader beneficial effects because gut immunity has been linked to several autoimmune diseases, including rheumatoid arthritis, Crohn’s disease and diabetes.

For their experiments, the team collected 53 common bacterial species from human guts and seeded them in sterile mouse guts, one microbe at a time. Two weeks later, the scientists performed immune and genomic analyses, comparing the results with those of mice whose guts were completely microbe-free. Scientists assessed each microbe’s effects on 21 types of immune cells and on the activity of the entire cast of genes that regulate intestinal immunity.

The experiments yielded a few surprises.

Spectrum effect
Each immune cell type was affected by bacteria in a range of ways, the team observed. Some bacteria exerted a powerful influence, while others had far more subtle effects. Very few microbes produced no effect at all.

Some bacteria boosted the activity of certain cells, while others dampened the activity of the very same cells. These oppositional effects, the researchers say, suggest an evolutionary checks-and-balances mechanism to ensure that no single bacterium can overpower the others in its effects on the immune system.

Similarly, some bacteria upregulated certain genes, while others downregulated them, indicating that microbes can have balancing effects on intestinal gene expression.

When researchers analyzed bacterial effects on genes that regulate the activity of cytokines—signaling molecules responsible for inducing inflammation in response to infection, cancer and other diseases—they once again observed the same balancing dynamic at play: Some bacteria boosted the activity of these genes while others turned it down.

Redundancy
Also, contrary to expectations, the researchers said, bacteria that belonged to the same class did not necessarily have the same, or even similar, effects on immune cells. That observation, researchers say, suggests an evolutionary fail-safe mechanism to ensure the preservation of key immune functions even if whole classes of bacteria are lost.

A quarter of the 53 bacteria studied potently boosted the numbers of immune cells known as regulatory T cells, which are responsible for taming inflammation and maintaining immune self-tolerance to shield the body from self-inflicted immune assault.

Another interesting observation, the researchers said, was that a single, little-known microbe, Fusobacterium varium, had, overall, the most powerful effect on immune cells across the board. These effects included suppression of naturally secreted antimicrobials and the ability to turn on several genes that promote inflammation.

The most potently affected class of immune cells was plasmacytoid dendritic cells, known to affect the function of regulatory T-cells and the secretion of interferons, naturally occurring proteins that fend off viruses. Thirty-eight percent of microbes boosted the levels of these dendritic cells, while 8 percent lowered their levels.

The team is currently studying microbial-immune interaction in a more complex context, analyzing the additive effects of several bacterial species at a time.