Noninvasive laser therapy could radically shift dental treatment and lead to a host of broader clinical applications in regenerative medicine.

A Harvard-led team is the first to demonstrate the ability to use low-power light to trigger stem cells inside the body to regenerate tissue, an advance they reported in Science Translational Medicine. The research, led by Wyss Institute Core Faculty member David Mooney, lays the foundation for a host of clinical applications in restorative dentistry and regenerative medicine more broadly, such as wound healing, bone regeneration, and more.

The team used a low-power laser to trigger human dental stem cells to form dentin, the hard tissue that is similar to bone and makes up the bulk of teeth. What’s more, they outlined the precise molecular mechanism involved, and demonstrated its prowess using multiple laboratory and animal models.

A number of biologically active molecules, such as regulatory proteins called growth factors, can trigger stem cells to differentiate into different cell types. Current regeneration efforts require scientists to isolate stem cells from the body, manipulate them in a laboratory, and return them to the body—efforts that face a host of regulatory and technical hurdles to their clinical translation. But Mooney’s approach is different and, he hopes, easier to get into the hands of practicing clinicians.

“Our treatment modality does not introduce anything new to the body, and lasers are routinely used in medicine and dentistry, so the barriers to clinical translation are low,” said Mooney, who is also the Robert P. Pinkas Family Professor of Bioengineering at Harvard’s School of Engineering and Applied Sciences (SEAS). “It would be a substantial advance in the field if we can regenerate teeth rather than replace them.” 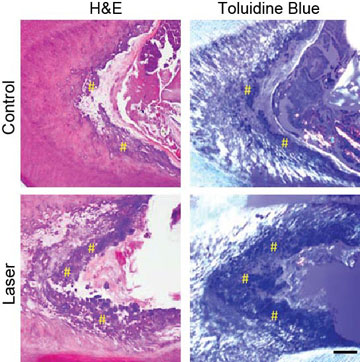 The team first turned to lead author and dentist Praveen Arany, who is now an Assistant Clinical Investigator at the National Institutes of Health (NIH). At the time of the research, he was a Harvard graduate student and then postdoctoral fellow affiliated with SEAS, the Wyss Institute, and the Harvard School of Dental Medicine.

Arany took rodents to the laboratory version of a dentist’s office to drill holes in their molars, treat the tooth pulp that contains adult dental stem cells with low-dose laser treatments, applied temporary caps, and kept the animals comfortable and healthy. After about 12 weeks, high-resolution x-ray imaging and microscopy confirmed that the laser treatments triggered the enhanced dentin formation.

“It was definitely my first time doing rodent dentistry,” said Arany, who faced several technical challenges in performing oral surgery on such a small scale. The dentin was strikingly similar in composition to normal dentin, but did have slightly different morphological organization. Moreover, the typical reparative dentin bridge seen in human teeth was not as readily apparent in the minute rodent teeth, owing to the technical challenges with the procedure.

“This is one of those rare cases where it would be easier to do this work on a human,” Mooney said.

Next the team performed a series of culture-based experiments to unveil the precise molecular mechanism responsible for the regenerative effects of the laser treatment. It turns out that a ubiquitous regulatory cell protein called transforming growth factor beta-1 (TGF-β1) played a pivotal role in triggering the dental stem cells to grow into dentin. TGF-β1 exists in latent form until activated by any number of molecules.

Here is the chemical domino effect the team confirmed: In a dose-dependent manner, the laser first induced reactive oxygen species (ROS), which are chemically active molecules containing oxygen that play an important role in cellular function. The ROS activated the latent TGF-β1complex which, in turn, differentiated the stem cells into dentin.

Nailing down the mechanism was key because it places on firm scientific footing the decades-old pile of anecdotes about low-level light therapy (LLLT), also known as Photobiomodulation (PBM).

Since the dawn of medical laser use in the late 1960s, doctors have been accumulating anecdotal evidence that low-level light therapy can stimulate all kind of biological processes including rejuvenating skin and stimulating hair growth, among others. But interestingly enough, the same laser can be also be used to ablate skin and remove hair—depending on the way the clinician uses the laser. The clinical effects of low-power lasers have been subtle and largely inconsistent. The new work marks the first time that scientists have gotten to the nub of how low-level laser treatments work on a molecular level, and lays the foundation for controlled treatment protocols.

“The scientific community is actively exploring a host of approaches to using stem cells for tissue regeneration efforts,” said Wyss Institute Founding Director Don Ingber, “and Dave and his team have added an innovative, noninvasive and remarkably simple but powerful tool to the toolbox.” Ingber is also the HMS Judah Folkman Professor of Vascular Biology at Boston Children’s Hospital.

Next Arany aims to take this work to human clinical trials. He is currently working with his colleagues at the National Institute of Dental and Craniofacial Research (NIDCR), which is one of the National Institutes of Health (NIH), to outline the requisite safety and efficacy parameters. “We are also excited about expanding these observations to other regenerative applications with other types of stem cells,” he said.