‘Lifespan Machine’ Probes Cause of Aging

Findings suggest that aging has no single mechanism 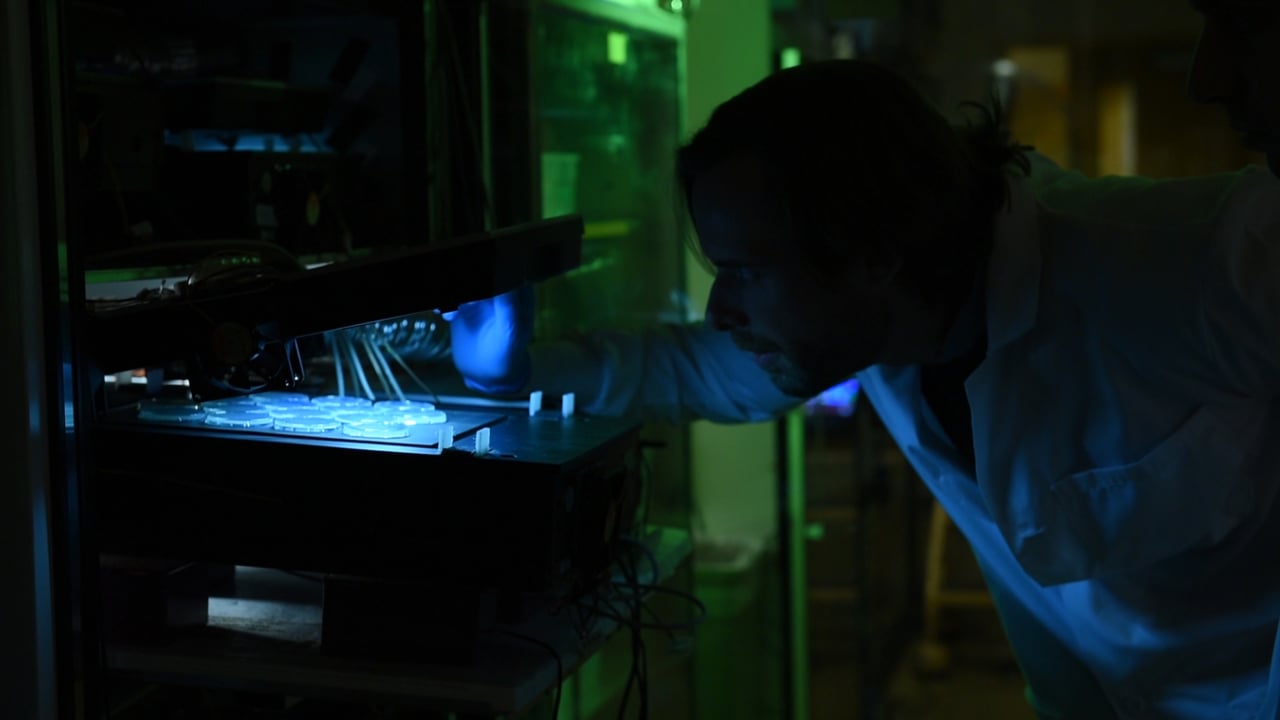 What is the lifespan machine? Nicholas Stroustrup and Winston Anthony explain the device and what it has revealed about the causes of aging in tiny worms—and possibly humans. Video: Rick Groleau

Aging is one of the most mysterious processes in biology. We don’t know, scientifically speaking, what exactly it is. We do know for sure when it ends, but to make matters even more inscrutable, the timing of death is determined by factors that are in many cases statistically random.

Researchers in the lab of Walter Fontana, Harvard Medical School professor of systems biology, have found patterns in this randomness that provide clues into the biological basis of aging.

The research team, led by Novartis Fellow Nicholas Stroustrup, found a surprising statistical regularity in how a variety of genetic and environmental factors affect the life span of the Caenorhabditis elegans worm.

Their findings suggest that aging does not have a single discrete molecular cause but is rather a systemic process involving many components within a complex biological network. Perturb any node in the system, and you affect the whole thing.

The study, published Jan. 27 in Nature, offers an alternative to research that seeks to identify a specific master aging mechanism, such as protein homeostasis or DNA damage.

“There are many important molecular changes that occur with age, but it might not make sense to call all of them ‘causes of aging,’ per se,” said Stroustrup, first author on the paper.

In order to study life span dynamics at the population level, Stroustrup constructed the Lifespan Machine, a device comprising 50 off-the-shelf flatbed scanners purchased from an office supplies store. Each scanner has been retooled to record 16 petri dishes every hour, totaling 800 dishes and 30,000 worms. The scanners capture images at 3,200 dots per inch, which is a resolution high enough to detect movements of eight micrometers, or about 12 percent of the width of an average worm.

Stroustrup subjected the worms to interventions as diverse as temperature changes, oxidative stress, changes in diet and genetic manipulations that altered, for example, insulin growth factor signaling. The Lifespan Machine recorded how long it took the worms to die under each condition. Stroustrup then aggregated the data, generated life span distribution curves for each intervention and compared results.

The life span distributions provided considerably more information than just changes in average life span. The research team measured variations arising in ostensibly identical individuals, looking at how many worms died young versus how many made it to old age under each condition. This comprehensive view was important for capturing the dynamics and randomness in the aging process.

Clear as a bell curve

In one sense, the findings were not surprising: different circumstances produced different life spans. Turning up the heat caused the worms to die quickly, and turning it up higher only increased that rate. Pictured as bell-shaped distributions, certain interventions produced a thinner, high-peaked bell, while others resulted in a more drawn-out and protracted bell.

Despite these obvious differences, the researchers found an unexpected uniformity among the curves, observing what statisticians call “temporal scaling.” Stated for the rest of us, if you were to take all of the bell-shaped curves and expand or contract them along the X-axes (which in this study represented time), they would become statistically indistinguishable. Simply compressing the protracted bell would produce a high-peaked bell, or vice versa. The two bells have, in a rigorous sense, the same shape.

The various interventions seemed to affect the duration of life in the same way across all individuals in the same population, regardless of whether chance or randomness had a short or long life in store for them. No matter which genetic process or environmental factor the researchers targeted, all molecular causes of death seemed to be affected at once and to the same extent.

“Life span is a whole-organism property,” said Fontana, “and it is profoundly difficult to study it molecularly in real time. But by discovering this kind of statistical regularity about the endpoint of aging, we have learned something about the aging process that determines that endpoint.”

Most important, said Fontana, this regularity suggests that there is profound interdependence in the physiology of an organism, and changes in one physiological aspect affect all others to determine life span.

The researchers believe that their discovery will influence how scientists study, and even define, aging—for people as well as worms.  The researchers now plan to study in more detail how broad statistical regularities can emerge from the action of diverse molecular mechanisms, seeking to determine exactly how alteration of one mechanism can affect all others.

This research was funded by the National Institutes of Health and the Glenn Foundation for Medical Research.