Lessons on Human Longevity … From Rockfish 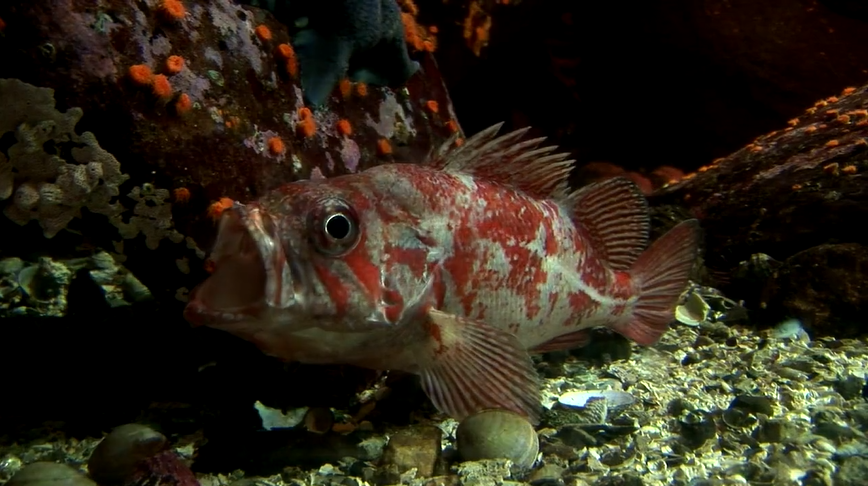 Analyses of rockfish such as Sebastes miniatus helped researchers home in on genes associated with longevity in humans. Video: CrackerClips/Creatas Video+/Getty Images Plus

A team led by scientists at Harvard Medical School and Boston Children’s Hospital has found a new biological pathway linked to longer life span in humans — thanks to a study in fish.

It helps when a postdoctoral fellow interested in aging works in the lab of a self-professed “fish guy” who specializes in unearthing clues about organismal evolution and development in piscine genomes.

Study in mice implicates changes to way DNA is organized, regulated rather than changes to genetic code itself

The postdoc in question, Stephen Treaster, HMS research fellow in genetics in the lab of Matthew Harris, analyzed the DNA of 23 species of rockfish — a diverse clade of fish that hide among rocks on seafloors around the world.

Rockfish offer a unique opportunity to study longevity because they include more than 100 species that have evolved to exhibit a vast range of life spans, from 11 years to more than 200 years.

The fish exhibit other characteristics that appeal to geneticists: They evolved and diverged recently and, unlike many other animals, show little or no apparent link between their life span and their body size or the environments in which they live.

Treaster and colleagues reported Jan. 11 in Science Advances that comparing the species’ DNA revealed a set of genes associated with changes in their life spans.

Some of those genes were already known to regulate longevity in humans and many other species, including genes that produce proteins involved in insulin signaling, glycogen regulators, sirtuins, and amyloid precursors whose abnormal processing contributes to Alzheimer’s disease.

But other genes hadn’t been flagged before. Among the surprise candidates were genes involved in flavonoid metabolism. Despite the name, these genes normally regulate steroid hormones that affect how long an organism takes to reach sexual maturation.

To determine whether the findings pertained to people or were relevant only to fish, the team combed through a database of human genome sequences.

They found that the same flavonoid metabolism genes underlying longevity in rockfish had unique variations in human participants who lived extraordinarily long lives.

The findings suggest that flavonoid metabolism can be added to the collection of biological pathways that influence human longevity. The link, however, needs to be explored further before scientists can say for certain whether these genes affect life span and, if so, exactly how. Treaster and colleagues are now trying to answer those questions in zebrafish models.

For the moment, the team is happy that its study not only provides insights into vertebrate longevity but also demonstrates the power of comparative genomics to illuminate complex traits — a rare achievement to date.

“It’s incredibly impressive and valuable that this actually worked,” he said. “It shows how comparative genomics can detect signals from millions of years of evolution to help us understand the networks of genes that interact to regulate complex phenomena such as longevity.”

The work could also aid efforts to better understand the molecular basis of aging and develop new strategies for delaying, preventing, and treating age-related diseases, a personal motivation for Treaster.

“I'm worried about age-related diseases, both for myself and those I care about and really for everyone,” he said. “It seems to me we can find answers in animals that have already solved the problem of surviving disease-free for more than a century in unforgiving natural environments. We just need to ask the right questions in the right models.”