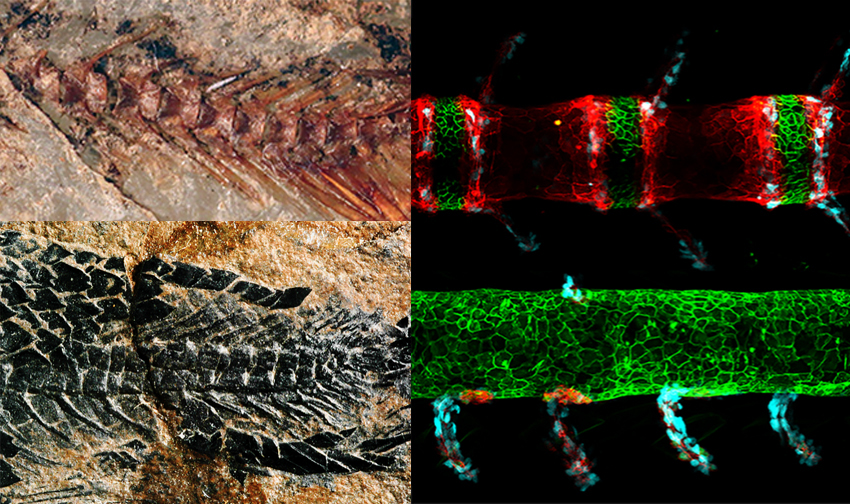 A modern zebrafish mutant developed unusual spinal traits (bottom right) compared to normal zebrafish (top right) and tens of thousands of other fish species that have shared a spine pattern for hundreds of millions of years (top left). The abnormal spine resembles that of an early ancestor (bottom left), revealing that the ancient blueprint has lurked in fish genomes all along and offering a new model for human developmental spine disorders. Images: Gloria Arratia (left) and Brianna Peskin (right).

From sharks to salamanders to hawks to humans, vertebrates have backbones in common. Even so, vertebrae can form in divergent ways and have a variety of structures across vertebrate classes.

For instance, the spines of teleost fish, which account for more than half of all vertebrates, follow different developmental steps from those of the spines of land animals, including reptiles, amphibians, birds and mammals.

This deviation has made it hard for researchers to know how effectively they can use fish backbones as a model for understanding normal and abnormal human spine development. Among them is Matthew Harris, associate professor of genetics in the Blavatnik Institute at Harvard Medical School and associate professor of orthopedic surgery at Boston Children’s Hospital.

Now, by combining paleontology, cell biology and developmental genetics, Harris and colleagues from Duke University Medical Center and the University of Kansas have pinpointed a key player distinguishing fish and human spines and discovered a way to reverse that evolutionary divergence.

In doing so, they created a zebrafish model for congenital scoliosis, a malformation of the spine that’s present at birth.

The team reported online June 18 in Current Biology that a genetic mutation in zebrafish causes a type of unusual spine development not seen in most fish for millions of years.

The mutation alters cell signaling during spine development and leads to misshapen vertebrae, the researchers found. The signals increase susceptibility to defects associated with congenital scoliosis, which can be mild or severe and involves a sideways curve or twist of the spine.

“This mutant shows us how we can use fish to study the development of congenital scoliosis, which affects about 1 in 10,000 children, in a manner that was not previously achievable,” said Harris.

The team named the mutant zebrafish spondo, from spondylos, the Greek word for “spine.”

When the researchers first discovered the mutant, they did some digging and realized spondo’s spine resembled those of ancient fish. The mutation revealed that spondo's genome—and likely those of other teleosts—contains a long-dormant program for the same kind of spine development shared by land-dwelling vertebrates.

The new work shows that the blueprint for that early spine has lurked in fish genomes all along—and that a change in just one genetic “letter” can cause those latent traits to reemerge.

The mutation occurs in a gene found in all fish. The researchers discovered that it affects a primitive embryonic structure called the notochord, a tube-shaped protospine seen in developing vertebrates.

In fish, signals from the notochord orchestrate the growth of vertebrae in their distinctive knobbed line. In humans, however, a different process cues vertebrae formation, and after birth the notochord gets relegated to a component of the material between our vertebrae. It can be a source of back pain and disease, said Harris.

The new study reveals that this single notochord-related gene, along with the cell signal it disrupts, is an essential part of the difference between fish and human spines—and that altering the gene or the signal can generate a fish spine that more closely resembles those of us and our land-dwelling relatives.

The work also demonstrates the importance of the notochord in spine evolution.

“The observation that a single point mutation drives this shift in evolution and form, and that the core patterning of the spine is retained across vertebrate species—only it's just beneath the surface—is perhaps our most surprising finding,” said Harris.

Or to put it another way, Harris said, “So we are fish after all…or fish are us.”

Harris is co-senior author of the paper with Michel Bagnat of Duke University Medical Center and Gloria Arratia of the University of Kansas.

This study was supported in part by the Boston Children’s Hospital Orthopedic Research Foundation, the National Institutes of Health (grant R01AR065439) and the Howard Hughes Medical Institute (faculty scholar grant 55108501).