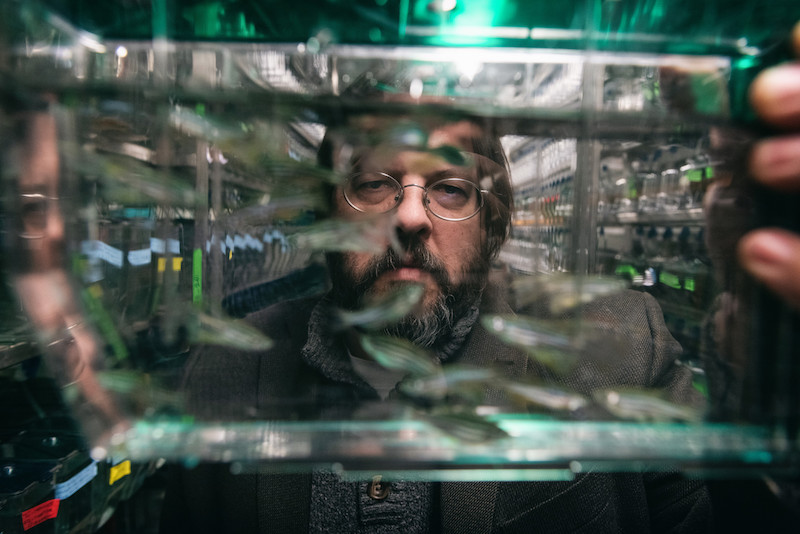 From fragile ice fish deep in the Antarctic Ocean to flying fish gliding above the Caribbean Sea, fish have evolved a fascinating variety of skeletal traits.

These traits not only help them adapt to their environments, they also provide genetic insights into rare human skeletal disorders.

Fish are not as genetically different from us as you might think, and collaborations between Matthew Harris, associate professor of genetics in the Blavatnik Institute at Harvard Medical School, and doctors and surgeons in the community are starting to bridge the gap between the natural and clinical worlds.

Harris started out studying marine biology, then later moved into developmental genetics, using evolutionary adaptations in fish to unlock the potential of the human genome.

His research questions are broad, such as “Why do organisms maintain variations in their genome that are potentially harmful?” But the answers could lead to practical applications in medicine and perhaps new treatment approaches for children with skeletal anomalies.

Zebrafish make good models because they are small, easy to manipulate and inexpensive, breed quickly and have a significant genetic overlap with humans, sharing about 80 percent of their genomes through a common ancestor.

“At one point, we were all fish,” said Harris, who is also associate professor of orthopedic surgery at Boston Children’s Hospital.

At one point, we were all fish.

Fish on the brain

John Meara, the Steven C. and Carmella R. Kletjian Professor of Global Health and Social Medicine in the field of Global Surgery at HMS and plastic surgeon-in-chief of the Department of Plastic and Oral Surgery at Boston Children’s, provides Harris with leftover bone fragments from patients undergoing surgery for various craniofacial anomalies.

One collaboration centers on craniosynostosis, a condition in which the skull bones fuse too early during a child’s development, causing problems with brain and skull growth.

Harris produces zebrafish with a variety of mutations, looking for cranial abnormalities similar to those in craniosynostosis.

“He gets a lot of really cool-looking fish that have different types of skull fusions,” said Meara.

Harris then compares the zebrafish DNA with DNA from patient samples and pinpoints their shared mutations, which are useful for understanding the origins of craniosynostosis.

“To get transformational research, you need to link the clinicians who are seeing things in humans with the basic science researchers who have the ability to identify not only the mutations but the mechanisms causing a certain disease,” said Meara. “Together, that’s how you can make real progress.”

Harris and team have pursued answers all over the world, guided by the unique adaptations of the fish they study as well as the rare skeletal conditions of children seen at the hospital.

In Antarctica, their research centers around deep-water ice fish, which have developed thin, brittle skeletons that allow them to float above the sea floor despite the intense pressure of the water above.

The fishes’ thin bones are similar to those of children with another rare disease treated at Boston Children’s: osteogenesis imperfecta, or brittle bone disease.

Harris and his team sequenced the genomes of 46 species of ice fish and their close relatives. By comparing specific genes across all of the species, the team was able to narrow down the exact “spelling changes” in DNA that led to the loss in bone density.

The team then replicated these mutations in lab zebrafish and observed analogous changes in skeletal density that will serve as a model in future research.

Christina Jacobsen, assistant professor of pediatrics at HMS and Boston Children’s, is currently collaborating with Harris to find genes that modify the severity of osteogenesis imperfecta.

“One child might have fractures very early in life and need medical therapy while their sibling might have hardly any fractures in childhood and do quite well,” she noted.

While Jacobsen has been using mouse models to look for modifying mutations that contribute to this variation, Harris is looking for similar modifications in zebrafish.

“We’re able to go at it from slightly different perspectives and give a little bit more power to our experiments by using two different models,” said Jacobsen.

Other research in the Harris lab focuses on flying fish, whose powerful fins allow them to glide above the water as far as 650 feet in one go as they strive to escape from predators.

Harris noticed that the long bones that support these kite-like fins are analogous to the elongated bones in patients with macrodactyly, a skeletal anomaly in which fingers or toes can grow up to three times their normal size.

In association with the Central Caribbean Marine Institute, lab members went down to the Caribbean to sequence the genomes of flying fish and related species, collectively known as needlefish.

As with ice fish, the team identified specific mutations and recreated the same mutations in zebrafish. The zebrafish, too, grew longer fins.

Brian Labow, HMS associate professor of surgery and a plastic surgeon in Boston Children’s Hand and Reconstructive Microsurgery Program, is working with Harris to compare the genetic mutations of flying fish with those found in bone samples from patients with macrodactyly.

Until now, the genetics of macrodactyly have been difficult to study, both because of its rarity and because the causative mutations don’t appear in every cell in the affected area. Harris, however, can introduce the same mutations into developing zebrafish to investigate which combinations lead to this extreme localized overgrowth.

“It is very valuable to use whole animal models to study genes of interest and see whether or not you can generate your phenotype,” said Labow. “In macrodactyly, there has never been an animal model, ever, up until this collaboration with Matt.”

Today, Harris is looking beyond the skeleton. Using rockfish as a case study, he is investigating human longevity.

Rockfish, unassuming ocean bottom dwellers, can live up to 250 years, and Harris is intent on finding out why.

In all of his work, Harris maintains a passion for understanding human genetics and disease using the examples already provided by nature.

“When you get anywhere near this type of research, you find these underlying lessons of life,” he said, “and you really get hooked.”