Insights at the intersection of the nervous, immune systems point to culprit 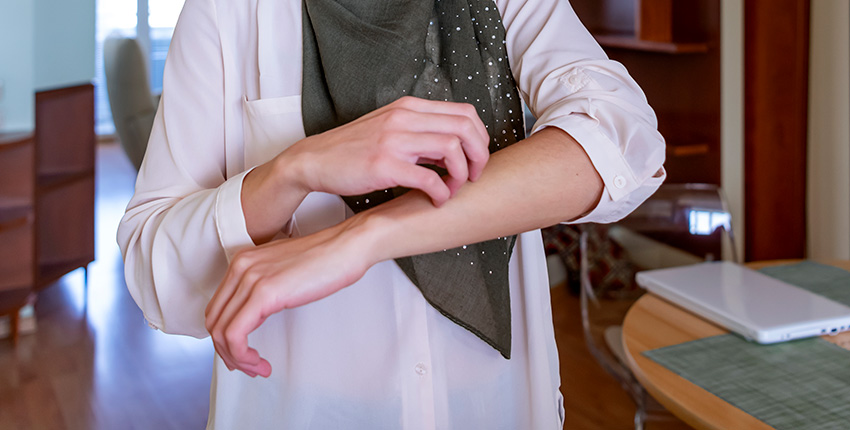 Eczema, or atopic dermatitis (AD), is sometimes called “the itch that rashes.” Often, the itch begins before the rash appears, and, in many cases, the itchiness never really goes away.

Approximately 9.6 million children and 16.5 million adults in the U.S. have AD, and it can have a serious effect on a person’s quality of life. Although much has been learned about the uncomfortable sensation that triggers the desire to scratch, many mysteries remain about chronic itch, and treatment for the condition remains a challenge.

Now research led by investigators at Harvard Medical School and Brigham and Women’sHospital, published March 30 in the Proceedings of the National Academy of Sciences, offers new clues about the underlying mechanisms of itch.

The work, which was conducted in mice, points to a key molecular player known as cysteine leukotriene receptor 2 (CysLT2R) that may be a new target for designing treatments to target intractable chronic itch.

“In atopic dermatitis, the itching can be horrific and it can aggravate disease,” said co-corresponding author K. Frank Austen, the AstraZeneca Professor of Respiratory and Inflammatory Diseases, Emeritus, at HMS and a senior physician in the Division of Allergy and Clinical Immunology at Brigham and Women’s.

“We began collaborating for two reasons: One is an interest in science—I wandered into the study of what is now the cysteine leukotriene pathway decades ago, and I’ve been pursuing it ever since,” Austen said. “The second reason is itch—understanding its cause and connections to neurons.”

Austen and his lab, which focuses on the molecular components that contribute to allergic inflammation, collaborated with Isaac Chiu, assistant professor of immunology in the Blavatnik Institute at Harvard Medical School. The team also included researchers at the Center for Immunology and Inflammatory Diseases at Massachusetts General Hospital and at the University of Texas at Dallas.

“As a neuro-immunologist, I’m interested in how the nervous system and immune system cross-talk,” said Chiu, who is a co-corresponding author of the study. “Itch arises from a subset of neurons, and acute itch may be a protective response to help us remove something that’s irritating the skin. However, chronic itch is not protective and can be pathological. The underlying mechanism that activates neurons and causes chronic itch is not well understood and new treatments are needed.”

Chiu, Austen, and colleagues set out to elucidate the molecular mechanisms that may trigger chronic itch. To do so, they looked for gene activity in dorsal root ganglia (DRG) neurons linked to itch in mice. They found a striking level of CysLT2R, which was uniquely and highly expressed in these specific neurons. They also found expression of this receptor in human DRG neurons. This led the researchers to focus their analysis on the receptor’s role in itch signaling.

Additional studies showed that activating this receptor induced itching in a mouse model of AD, but not in other mouse models. Mice that lacked CysLT2R showed decrease itching. Collectively, their findings pointed to the receptor’s key role in causing itch and potentially contributing to AD.

Study lead author Tiphaine Voisin carried out many of the preclinical experiments in mouse models of AD when she was a research fellow in the Chiu lab at HMS.

“The last ten years or so of research in the field of chronic itch have shown the importance and the complexity of the interactions between the immune system and the nervous system,” said Voisin. “It was very exciting to explore the contribution of cysteine leukotrienes in these neuro-immune cross-talks leading to itch, including in a mouse model of AD.”

Leukotrienes are a class of lipid molecules that originate from white blood cells, such as mast cells, which are involved in allergy and inflammation. Today, the leukotriene inhibitor montelukast, which targets CysLT1R, is used to treat asthma but does not provide relief from itch.

No clinically approved inhibitors of CysLT2R currently exist and, while the researchers have seen evidence of the receptors in humans, until an inhibitor is developed and trialed in humans, it will remain an open question as to whether the new target can lead to a therapy for patients.

While Chiu and Austen are eager to see their findings prompt treatment improvements, Austen, who has been pursuing leukotrienes since the 1970s, also notes the importance of making new discoveries and unexpected connections through research.

“I do believe that science is bottom up, not top down,” said Austen. “The joy of research is doing it for the pleasure of finding out something you didn’t know. The immune system is far more complex than we give it credit for. Understanding the involvement of nerves is an immense step forward—it’s been a missing piece in the study of inflammation. In my view, this is immensely important to connect neuroscience with those of us committed to studying inflammation.”