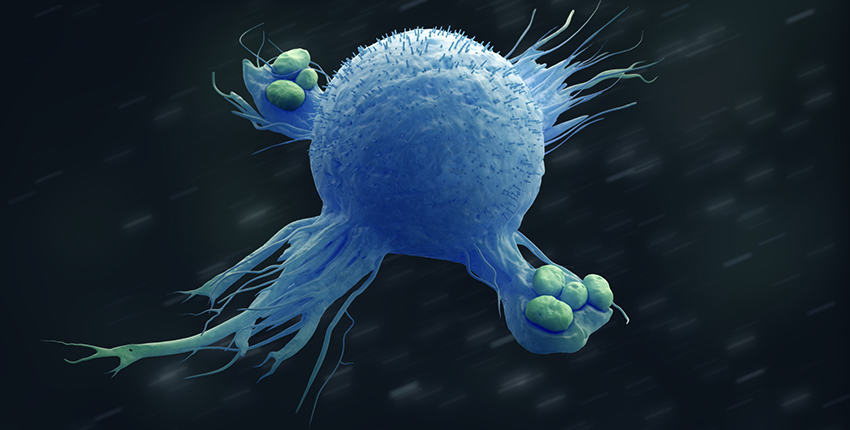 Illustration of a macrophage battling bacteria. Image: urfingus/iStock/Getty Images Plus

A study led by researchers at Harvard Medical School and Boston Children’s Hospital explains for the first time why COVID-19 causes severe inflammation in some people, leading to acute respiratory distress and multi-organ damage.

Surprisingly, the study also finds that antibodies that people develop when they contract COVID-19 sometimes lead to more inflammation, while antibodies generated by mRNA COVID-19 vaccines seem not to.

“We wanted to understand what distinguishes patients with mild versus severe COVID-19,” said Lieberman. “We know that many inflammatory markers are elevated in people with severe disease, and that inflammation is at the root of disease severity, but we hadn’t known what triggers the inflammation.”

Once infected, the team found, both types of cells die a fiery death called pyroptosis that releases an explosion of powerful inflammatory alarm signals.

“In the infected patients, about 6 percent of blood monocytes were dying an inflammatory death,” said Lieberman. “That’s a large number to find, because dying cells are rapidly eliminated from the body.”

Examining the lung tissue from people who died from COVID-19, they found that about a quarter of the macrophages in the tissue were dying.

When the researchers studied the cells for signs of SARS-CoV-2, they found that about 10 percent of monocytes and 8 percent of lung macrophages were infected.

The fact that monocytes and macrophages can be infected with SARS-CoV-2 was a surprise, since monocytes don’t carry ACE2 receptors, the classic entry portal for the virus, and macrophages have low amounts of ACE2.

Lieberman thinks SARS-CoV-2 infection of monocytes might have previously been missed in part because researchers often study frozen blood samples, in which dead cells do not show up.

The fact that monocytes and macrophages can be infected with SARS-CoV-2 was a surprise.

The study also showed that while SARS-CoV-2 was able to infect monocytes and macrophages, it could not produce new infectious viruses. The researchers believe the cells died quickly from pyroptosis before new viruses could fully form.

“In some ways, uptake of the virus by these ‘sentinel’ cells is protective: it sops up the virus and recruits more immune cells,” said Lieberman. “But the bad news is that all these inflammatory molecules get released. In people who are more prone to inflammation, such as the elderly, this can get out of control.”

The team found that a certain group of monocytes was especially likely to be infected: those carrying a receptor called CD16. These “non-classical” monocytes make up only about 10 percent of all monocytes, but their numbers were increased in patients with COVID-19, the researchers found. About half were infected, compared with none of the classical blood monocytes.

The CD16 receptor appears to recognize antibodies against the SARS-CoV-2 spike protein. The researchers believe these antibodies may actually facilitate infection of monocytes carrying the receptor.

“The antibodies coat the virus, and cells with the CD16 receptor then take the virus up,” Lieberman said.

However, when the team studied healthy patients who had received mRNA vaccines against COVID-19, namely the Moderna and Pfizer vaccines, the antibodies they developed did not appear to facilitate infection.

The reason for this is still unclear. The researchers believe that vaccine-generated antibodies have slightly different properties from antibodies that develop during infection and don’t bind as well to the CD16 receptor. As a result, the cells don’t take the virus up.

The findings may have implications for using monoclonal antibodies to treat COVID-19, helping to explain why the treatment works only when given early.

“It may be that later on, antibodies may help enhance inflammation,” said Lieberman. “We may need to look at the properties of the antibodies.”