Humor, Laughter, and Those Aha Moments

A duck walks into a bar. . . . It’s a joke! Hearing just the first few words, your brain springs into action. The path of neuronal activity is a complex one that enlists various brain regions: the frontal lobe, to process the information; the supplementary motor area, to tap learned experience to direct motor activities such as the movements associated with laughter; and the nucleus accumbens, to assess the pleasure of the story and the reward that the “aha!” brings. When the punch line hits home, your heart rate rises, you jiggle with mirth, and your brain releases “feel good” neurotransmitters: dopamine, serotonin, and an array of endorphins. 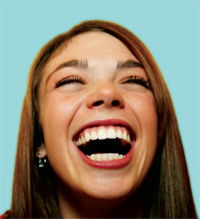 Jokes work because they defy expectations. The surprise aspect of these tales kicks in the frontal lobe’s search for pattern recognition. The punchline moment shifts one’s orientation away from information processing toward an emotional response arising deep within the nucleus accumbens. This response is then tagged for an overall relevance check. If the prefrontal cortex, which is part of the frontal lobe, deems the information attention worthy, it dedicates more processing power to it, along with conscious awareness. If the information remains relevant through the punch line, the brain shifts its response to its pleasure-and-reward center, which in turn triggers a guffaw.

“It’s important to make a distinction between humor and laughter,” says Carl Marci, MD, an assistant professor of psychiatry at Harvard Medical School and the director of social neuroscience in the Psychotherapy Research Program at Massachusetts General Hospital. “Humor is an evoked response to storytelling and shifting expectations. Laughter is a social signal among humans. It’s like a punctuation mark.”

To Titter Is Human 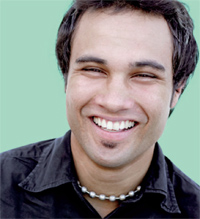 Humans experience the humor of a joke in three phases. First, the listener encounters some type of incongruity: a punch line that seems out of place compared with the joke’s set-up. Then, following a cognitive construct called surprise and coherence, the listener tries to resolve this incongruity. Finally, the listener’s brain determines the joke’s sense—or lack thereof—and decides whether or not the joke is funny.

“The body sends a signal to the brain that says, ‘Hey, that’s clever, that’s worth it,’ and we laugh,” says Marci.

So incongruity and dashed expectations form the foundation of what’s funny. But, as any comic will tell you, timing is everything. Most successful jokes are funny because the incongruity occurs within the few beats that exist between the set-up and the punch line. The following joke provides an example:

Gymnast: Can you teach me to do the splits?
Gymnastics instructor: How flexible are you?
Gymnast: Well, I can't come in on Thursdays.

We suss out the humor of this joke using the concept behind what scientists call the incongruity-resolution theory. The set-up gets us thinking in one direction, then the punch line comes along and jars us into realizing there is a completely different way to interpret the situation. By resolving the incongruity—in this case, the double meaning of ”flexible”—we are suddenly surprised. Our proverbial funny bone gets tickled, and we snicker. 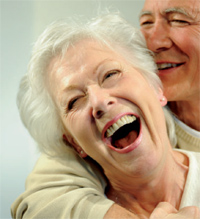 Studies have shown that the prefrontal cortex plays a vital role in the flexible thinking required to “get” a joke. This region of the frontal lobe, located forward of the brain’s motor regions, processes sensory information gathered by our eyes, ears, and other senses, then combines this information in a manner that helps us form useful, behavior-guiding judgments. The region also oversees the processing needed for planning complex cognitive behaviors, showing personality characteristics, and moderating social behavior. And it is the prefrontal cortex that helps us make sense of a joke’s punch line by sending signals along connections to both the supplementary motor area and the nucleus accumbens, producing a strong sense of surprise and eliciting laughter. In short, our prefrontal cortex is on the case as soon as we hear the first mention of that gymnast and that trainer.

“Laughter was a safe, early social signal to form human bonds,” says Marci. “Before we could speak, laughter told early humans that ‘Everything’s okay, you can come over to my side.’” Laughter is thought to have predated human speech, perhaps by millions of years, and may have helped our early ancestors clarify intentions during social interactions. But as language began to evolve, laughter may also have provided an emotional context for conversations—a signal of acceptance.

Scientists have described laughter’s evolution as one that preserved shared expressions of relief marking the passing of danger. Certain contemporary researchers think that jokes link with this: We laugh out of relief when we recognize the surprise element of the joke. 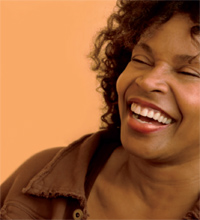 Humans, however, are not the only species to laugh; when tickled, some primates, including apes, gorillas, orangutans, and chimpanzees, will giggle, hoot, and scrunch their faces in a laugh-like manner. Yet scientists have no evidence that these other primates have a sense of humor. In fact, many researchers doubt they do. Unlike the brains of humans, the brains of primates are not thought to have evolved in a manner that would allow them to process the incongruities introduced in a joke.

Although the neural mechanisms of depression, anger, and fear have been tracked by scientists for years, only recently have investigators begun to look at how the brain processes humor.

The brains of depression sufferers, for example, show decreased activity in the regions that are engaged during the processing of something humorous. Researchers are studying whether this decrease in activity somehow impairs the brain’s ability to process humor. If indeed researchers find processing abnormalities in parts of the brain that handle humor, then some speculate it might be possible to boost activity in these key regions to lessen the symptoms of depression.

“The core deficit in depression is an imbalance between the frontal lobe and reward centers of the brain,” says Marci. “If those areas are important for laughter, then someone who is depressed will laugh less.”

Marci has in fact investigated humor’s role in mood disorders. In 2004, he published a study in the Journal of Nervous and Mental Disease on the effects of laughter during psychotherapy. Among the study’s participants, Marci found that for patients being treated for depression, anxiety, and other mood disorders, laughter was less about humor and more about communicating emotions. On average, these patients laughed about fifteen times in each fifty-minute psychotherapy session. To determine whether laughter had an effect on the patients, Marci measured the skin conductance, basically a measure of sweat, of both patients and psychiatrists. Skin conductance increases with the nervous system activity that controls blood pressure and heart rate, which together signal an aroused state. When clinicians did not laugh with patients, conductance measures still indicated both parties were aroused. But when patients and psychiatrists laughed together, the arousal measures for each group doubled.

The contagion of laughter, Marci says, suggests patients felt that the emotions they expressed were being validated. It also supports the notion that empathy is a shared experience. That laughter is catching is a reason television sitcoms use laugh tracks: taped laughter invites audience participation.

The findings, Marci adds, also suggest that mirror neurons, which are linked to empathic behavior, are often involved in laughter. Mirror neurons are a subset of neurons that fire both when we perform an action and when we observe that same action performed by others.

Once Daily, with Gusto

Laughter may also confer health benefits. For the past forty years, studies have shown that good, hearty laughter can relieve tension and stress; boost the immune system, by reducing stress hormones and increasing activity among immune cells and antibodies; and help reduce the risk of heart attack and stroke, by improving blood flow and blood vessel function.

Laughter and humor can be a tonic for the brain, as well. Triggering the brain’s emotional and reward centers spurs the release of dopamine, helping the brain to process emotional responses and enhancing our experience of pleasure; of serotonin, to buoy our mood; and of endorphins, to regulate our pain and stress and to induce euphoria.

The next time you hear a joke, whether you get it or not, let yourself go and enjoy a good, hearty laugh. It’s good for you!

This article appeared in the Spring 2010 issue of On The Brain.

For the curious nonscientist, On The Brain deciphers how the human brain works by highlighting the leading-edge research of neuroscientists at Harvard Medical School and its affiliated teaching hospitals. The thrice-annual newsletter, produced through the Office of Communications and External Relations, is sponsored by the Harvard Mahoney Neuroscience Institute.