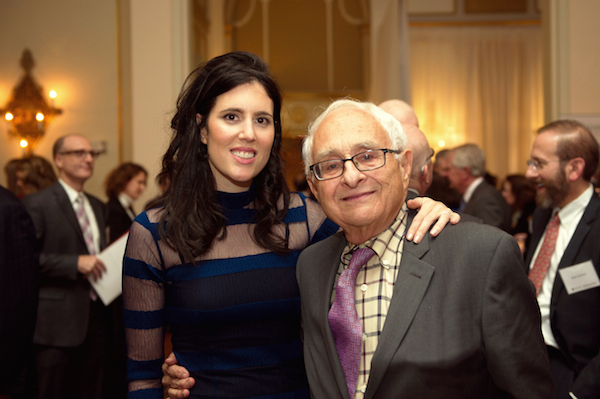 HMS Board of Fellows members Bevin Kaplan and her father, Herbert M. Kaplan, who are continuing the philanthropic legacy of Warren Alpert. Image by Gretchen Ertl

HMS Board of Fellows members Bevin Kaplan and her father, Herbert M. Kaplan, who are continuing the philanthropic legacy of Warren Alpert. Image by Gretchen Ertl

The Warren Alpert Foundation has pledged $20 million to Harvard Medical School, a gift that embodies the School’s priorities of service, discovery and leadership.

“While we would like to think of ourselves as consistently loyal supporters of HMS, it had been nearly a quarter of a century since we had shown our dedication in a major way,” says Bevin Kaplan, director and vice president of The Warren Alpert Foundation and a member of the HMS Board of Fellows. “It is my sincere hope that more people will recognize the immense value for all of humanity in supporting this exceptional institution.”

“We are deeply grateful to the leadership of The Warren Alpert Foundation for its generosity and longstanding friendship with the School,” said Jeffrey S. Flier, dean of Harvard Medical School. “We are excited for the opportunity to continue to share our work, our passion and our vision with the foundation.”

The gift will be divided into three main components.

“I am personally gratified that the chair has come from The Warren Alpert Foundation,” said McNeil. “The foundation has been extremely generous to HMS over the years in the basic sciences, and it is wonderful that it has endowed a chair in one of the social sciences.”

The foundation has also earmarked $7.5 million to establish The Warren Alpert Foundation Discovery Fund for Immunologic Research. Under Flier’s direction, the fund will advance pioneering immunological investigations at HMS.

The remaining $7.5 million will establish The Warren Alpert Foundation Dean’s Leadership Fund, a current-use fund that will provide vital and substantive latitude to Flier for advancing the School’s foremost priorities and strategic needs.

“HMS is a powerful engine fueled by new ideas,” said Flier. “The foundation understands that unrestricted gifts will allow the School to continue to invest in ideas that have the greatest potential to alleviate human suffering caused by disease.”

The Warren Alpert Foundation and Harvard Medical School have a partnership that spans decades. The foundation’s namesake, Warren Alpert, was a successful philanthropist and entrepreneur whose relationship with Dean Daniel C. Tosteson inspired the creation of The Warren Alpert Foundation Prize, an award administered by HMS to recognize the world’s foremost physician-scientists dedicated to preventing, curing or treating human diseases, and the naming of the Warren Alpert Building on the HMS campus. Since then, the foundation has established a professorship in basic research and supported an array of initiatives at the School.

Warren Alpert, (1920-2007), was a successful philanthropist and entrepreneur. He was the founder of Warren Equities, which Forbes Magazine lists as one of the top 500 privately owned companies. Mr. Alpert has been a generous philanthropist having established the Warren Alpert Foundation (http://warrenalpert.org)  which supports innovative individuals and organizations dedicated to understanding and curing disease through groundbreaking research, scholarship and service.