Happiness Is a Collective - Not Just Individual - Phenomenon

If you’re happy and you know it, thank your friends—and their friends. And while you’re at it, their friends’ friends. But if you’re sad, hold the blame. Researchers from Harvard Medical School and the University of California, San Diego have found that “happiness” is not the result solely of a cloistered journey filled with individually tailored self-help techniques. Happiness is also a collective phenomenon that spreads through social networks like an emotional contagion. 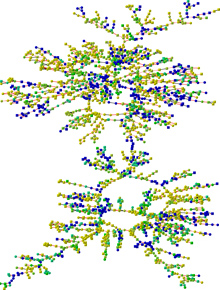 The flip side, interestingly, is not the case: Sadness does not spread through social networks as robustly as happiness. Happiness appears to love company more so than misery.

“We’ve found that your emotional state may depend on the emotional experiences of people you don’t even know, who are two to three degrees removed from you,” says Harvard Medical School professor Nicholas Christakis, who, along with James Fowler from the University of California, San Diego co-authored this study. “And the effect isn’t just fleeting.”

These findings will be published online Dec. 4 in the BMJ.

For over two years now, Christakis and Fowler have been mining data from the Framingham Heart Study (an ongoing cardiovascular study begun in 1948), reconstructing the social fabric in which individuals are enmeshed and analyzing the relationship between social networks and health. The researchers uncovered a treasure trove of data from archived, handwritten administrative tracking sheets dating back to 1971. All family changes for each study participant, such as birth, marriage, death, and divorce, were recorded. In addition, participants had also listed contact information for their closest friends, coworkers, and neighbors. Coincidentally, many of these friends were also study participants. Focusing on 4,739 individuals, Christakis and Fowler observed over 50,000 social and family ties and analyzed the spread of happiness throughout this group.

But the real surprise came with indirect relationships. Again, while an individual becoming happy increases his friend’s chances, a friend of that friend experiences a nearly 10 percent chance of increased happiness, and a friend of *that* friend has a 5.6 percent increased chance—a three-degree cascade.

“We’ve found that while all people are roughly six degrees separated from each other, our ability to influence others appears to stretch to only three degrees,” says Christakis. “It’s the difference between the structure and function of social networks.”

These effects are limited by both time and space. The closer a friend lives to you, the stronger the emotional contagion. But as distance increases, the effect dissipates. This explains why next door neighbors have an effect, but not neighbors who live around the block. In addition, the happiness effect appears to wear off after roughly one year. “So the spread of happiness is constrained by time and geography,” observes Christakis, who is also a professor of sociology in the Harvard Faculty of Arts and Sciences. “It can’t just happen at any time, any place.”

They also found that, contrary to what your parents taught you, popularity does lead to happiness. People in the center of their network clusters are the most likely people to become happy, odds that increase to the extent that the people surrounding them also have lots of friends. However, becoming happy does not help migrate a person from the network fringe to the center. Happiness spreads through the network without altering its structure.

“Imagine an aerial view of a backyard party,” Fowler explains. “You’ll see people in clusters at the center, and others on the outskirts. The happiest people tend to be the ones in the center. But someone on the fringe who suddenly becomes happy, say through a particular exchange, doesn’t suddenly move into the center of the group. He simply stays where he is—only now he has a far more satisfying sense of well-being. Happiness works not by changing where you’re located in the network; it simply spreads through the network.”

Fowler also points out that these findings give us an interesting perspective for this holiday season, which arrives smack in the middle of some pretty gloomy economic times. Examination of this dataset shows that having $5,000 extra increased a person’s chances of becoming happier by about 2 percent. But that the same data also show, as Fowler notes, that “Someone you don’t know and have never met—the friend of a friend of a friend—can have a greater influence than hundreds of bills in your pocket.”

This is the third major network analysis by Christakis and Fowler that shows how our health is affected by our social context. The two previous studies, both published in the New England Journal of Medicine, described the social network effects in obesity and smoking cessation.

"Dynamic spread of happiness in a large social network: longitudinal analysis over 20 years in the Framingham Heart Study"