What to do when seeking treatment is more likely to harm than to help? 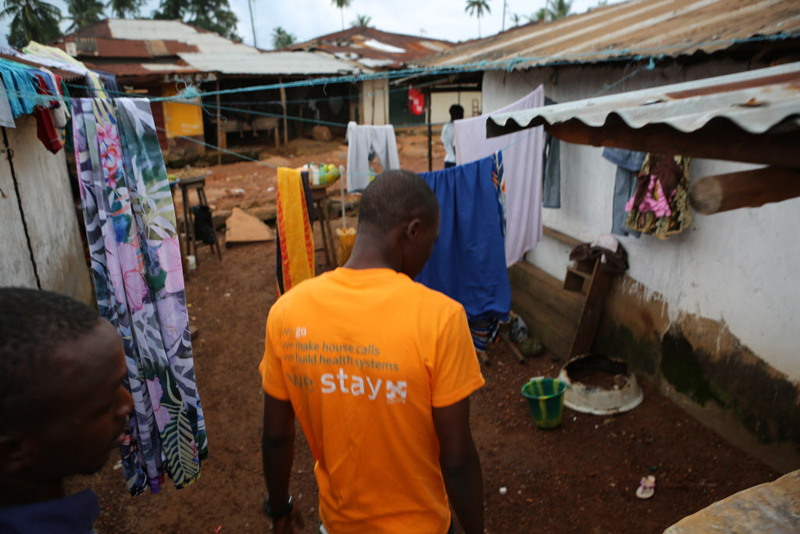 But there’s a catch. A person with those symptoms is just as likely to have malaria as Ebola, creating a potentially deadly dilemma, said the authors of a newly published essay in Lancet Global Health. Someone with malaria has a 1 in 500 risk of dying if they choose to avoid treatment, while someone without Ebola seeking care at an Ebola treatment unit at the time would have a 1 in 5 chance of getting infected and perishing from the virus.

The 64 percent mortality rate in treatment units, the authors said, stemmed from the fact that many Ebola units were ill-equipped to provide even the most rudimentary resuscitative care like intravenous fluids. What this meant, the authors add, is that even a person already sick with Ebola would be only marginally more likely to survive by seeking what then passed for treatment in such a poorly staffed and stocked facility.

In the absence of effective therapy, the authors argue, the choice between going to a clinic and staying home represents a higher-stakes version of the so-called prisoner’s dilemma, a game theory model of collaboration and betrayal that tries to tease out the rational basis for cooperation and altruism.

“You hear this notion that Ebola was driven by selfish ‘superspreaders’ who were unwilling to seek care,” said lead author Eugene Richardson, HMS instructor in medicine at Brigham and Women’s Hospital. “But the reality is that there was very little effective care available for most people, because of the region’s catastrophically underdeveloped health systems.”

“What’s more,” added Paul Farmer, the Kolokotrones University Professor of Global Health and Social Medicine at HMS, “many of the ‘superspreaders’ were caregivers, most of them traditional healers working in precisely those settings bereft of nurses and doctors.”

They nursed the sick and were involved in last rites and burial of the dead, he said.

“These are the main acts of caregiving—including its final act,” Farmer said.

Beyond a deconstruction of the impossible clinical and moral choices facing people with symptoms of Ebola, the essay is a call to action for policy makers, global health organizations and international development institutions to reframe and rethink the persistent misconceptions that the authors say have hamstrung an effective response to the suffering caused by Ebola.

The authors of the essay represent a diverse group that includes frontline clinicians who treated Ebola during the outbreak and researchers who conducted extensive studies of the clinical, biological and social aspects of the disease.

Some of the survivors who shared their stories with the authors talked about the heart-rending struggle to care for their loved ones in a place where the already strained health infrastructure was so overwhelmed by Ebola that clinics and hospitals were amplifying the outbreak instead of healing the afflicted, Richardson said.

"The essay is a call to action for policy makers, global health organizations and international development institutions to reframe and rethink the persistent misconceptions that the authors say have hamstrung an effective response to the suffering caused by Ebola."

In most cases, the afflicted sought help from caregivers—professional caregivers if they were available and lay caregivers if they were not. It bears noting, the authors added, that the three most affected countries were also the world’s most medically impoverished. There were, in other words, few professional caregivers. And so, the disease was transmitted from patient to caregiver, spreading not just from patient to family members but to nurses and doctors, as well. The story of Ebola in West Africa, Farmer has said, is the story of a “caregiver’s disease in a clinical desert.”

In other cases, people sought help but had to wait days for an ambulance to come.  At that point, Richardson said, their choice was to stand back and watch their sick family members suffer or to try their best to care for them and keep them clean.

“They knew about Ebola, knew how it spread, and they knew their mothers, their brothers, their children were probably infected,” Richardson said. “They weren’t going to sit there and watch their loved ones suffer. It’s a basic human response.”

Ebola doesn’t have to be just about making impossible choices between watching your loved ones suffer without helping or choosing to help and risking a horrible death yourself, Richardson said, adding that the 70 percent mortality rate seen at some points during the epidemic would be more like 5 percent if all patients had access to the kind of intensive resuscitative treatment available with modern health care.

It doesn’t even need to be all that modern. The authors point out that since 1832 intravenous fluids have been known to prevent death from hypovolemic shock, but Richardson said there are still some in the global health community who debate whether IV fluids should be considered part of the standard of care for Ebola, a disease that kills by sending some people into shock due to loss of blood and fluids.

“Not all people who die of Ebola die of hypovolemia,” Farmer said. “With this virus, sepsis kills people without volume loss, too. But the fact that some of those who die do so of shock is good news because there’s a straightforward, easy to implement way of providing effective care. The Ebola suspect’s dilemma arose because that almost never happened in West Africa, alas.”

Any solution that leaves out fundamental clinical aspects of treatment while ignoring the social context where it must function is unlikely to work, the authors said. Blaming patients—who choose to avoid dangerous medical facilities or who choose to take care of their sick loved ones—for the spread of the disease while focusing on attempts to contain Ebola through isolation without providing effective treatment in quarantine is like watching the shadows on the wall of Plato’s cave, the authors argued.

“It is an illusion to believe that any one discipline can deliver a simple solution to a problem as complex as Ebola,” Farmer said. “Understanding the daily lives of the people who have lived with the disease and its aftermath, as well as acknowledging the political, historical and economic forces that shaped those lives and the contours of the Ebola outbreak in West Africa, is every bit as important as understanding the pathophysiology of the disease or identifying new ways to deliver care.”