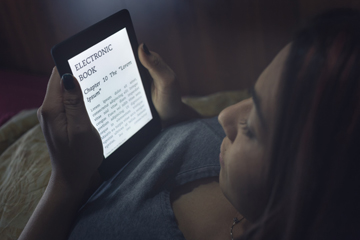 Use of a light-emitting electronic book (LE-eBook) in the hours before bedtime can adversely impact overall health, alertness and the circadian clock, which synchronizes the daily rhythm of sleep to external environmental time cues, according to Harvard Medical School researchers at Brigham and Women’s Hospital. These findings of the study that compared the biological effects of reading an LE-eBook to a printed book are published in the Proceedings of the National Academy of Sciences on December 22, 2014.

“We found the body’s natural circadian rhythms were interrupted by the short-wavelength enriched light, otherwise known as blue light, from these electronic devices,” said Anne-Marie Chang, corresponding author and associate neuroscientist at Brigham and Women’s Division of Sleep and Circadian Disorders. “Participants reading an LE-eBook took longer to fall asleep and had reduced evening sleepiness, reduced melatonin secretion, later timing of their circadian clock and reduced next-morning alertness than when reading a printed book.”

Previous research has shown that blue light suppresses melatonin, impacts the circadian clock and increases alertness, but little was known about the effects of this popular technology on sleep. The use of light-emitting devices immediately before bedtime is a concern because of the extremely powerful effect that light has on the body’s natural sleep/wake pattern and how that may play a role in perpetuating sleep deficiency.

During the two-week inpatient study, twelve participants read digital books on an iPad for four hours before bedtime each night for five consecutive nights. This was repeated with printed books. The order was randomized with some reading on the iPad first and others reading the printed book first. Participants reading on the iPad took longer to fall asleep, were less sleepy in the evening and spent less time in REM sleep. They had reduced secretion of melatonin, a hormone that normally rises in the evening and plays a role in inducing sleepiness. Additionally, iPad readers had a delayed circadian rhythm, indicated by melatonin levels, of more than an hour. Participants who read on the iPad were less sleepy before bedtime but were sleepier and less alert the following morning after eight hours of sleep. Although iPads were used in this study, researchers also measured other devices that emit blue light, including eReaders, laptops, cell phones and LED monitors.

“In the past 50 years, there has been a decline in average sleep duration and quality,” said Charles Czeisler, the HMS Frank Baldino, Jr., Ph.D. Professor of Sleep Medicine and chief of the Brigham and Women’s Division of Sleep and Circadian Disorders. “Since more people are choosing electronic devices for reading, communication and entertainment, particularly children and adolescents who already experience significant sleep loss, epidemiological research evaluating the long-term consequences of these devices on health and safety is urgently needed.”

Researchers emphasize the importance of these findings, given recent evidence linking chronic suppression of melatonin secretion by nocturnal light exposure with the increased risk of breast cancer, colorectal cancer and prostate cancer.

This research was supported by National Institutes of Health (NIH) grant R01HL77453 and in part by National Center for Research Resources (NCRR) grant UL1RR025758.