Researchers have discovered that changes in monocytes (a type of white blood cell) are a biomarker for amyotrophic lateral sclerosis (ALS), or Lou Gehrig's disease. This finding could lead to a new treatment for the debilitating neurological disease, which affects approximately 30,000 Americans.

The study was published online in The Journal of Clinical Investigation on August 6.

“People have wondered if the immune system plays a role in neurological diseases like ALS,” said Howard Weiner, Robert L. Kroc Professor of Neurology at HMS, director of the Partner's Multiple Sclerosis Center located at Brigham and Women's Hospital and senior study author. “The immune system is complicated, and previous immunotherapy trials have not been successful. But now we know what is wrong in the blood, and this opens up new therapeutic targets for ALS and perhaps other diseases in the near future.”

In preclinical studies involving mice with an ALS gene mutation, the researchers saw that two months prior to ALS onset, monocytes in the spleen began exhibiting proinflammatory qualities. 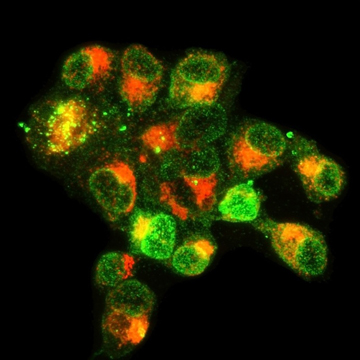 As disease onset loomed, there was an increase in cell-signaling molecules that directed monocytes to flood the spinal cord. Influx of these inflamed white blood cells was associated with nerve cell death in the spinal cord.

When the researchers treated the mice with antibodies to modulate the inflammatory monocytes, they found that it led to fewer monocytes entering the spinal cord, diminished nerve cell loss and extended survival.

After having observed these activities in mice, the Brigham and Women’s researchers, working with the Massachusetts General Hospital ALS Multidisciplinary Clinic and research team, found that there were similar monocytes in humans with ALS that also exhibited a disease-specific inflammatory signature.

Study co-author Merit Cudkowicz, Julieanne Dorn Professor of Neurology
at HMS and head of the Department of Neurology and the ALS program at Mass General said, “These findings identify a potential new target for developing treatments for people with ALS.”

Oleg Butovsky, HMS instructor in neurology at Brigham and Women’s Hospital, is first study author and lead scientist on the study.

Each year, approximately 5,600 people in the United States are diagnosed with ALS, a disease that affects nerve and muscle functioning, eventually leading to paralysis. The average age at diagnosis is 55 years old and half of those affected live at least three or more years after being diagnosed. Twenty percent live five years or more, and up to 10 percent will live more than 10 years.

This research was supported by the Amyotrophic Lateral Sclerosis Association, National Institutes of Health (AG027437), Prize4Life, and the Tufts Center for Neuroscience Research.

Adapted from a Brigham and Women's Hospital news release.