Scientists have captured real-time footage of how a crucial cellular process begins, findings that overturn a long-held theory about how the chaotic machinery of life organizes itself. This research also provides new ways to think about how drugs might interact with life’s moving parts at the molecular level. 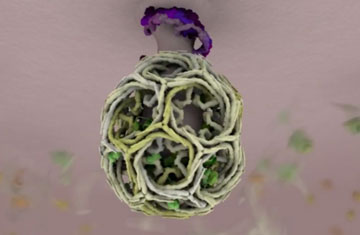 Building Bubbles: Surprising insights into how molecules move in and out of cells

Using exquisitely sensitive Total Internal Reflection Fluorescence microscopy (TIRF), a team led by Tom Kirchhausen, Harvard Medical School professor of cell biology, has for the first time ever recorded the initial five seconds in the life of membrane vesicles, small bubbles that pinch off from the membrane to carry cargo into cells. The imaging and analytical tools and techniques developed for this study could also be used to study other dynamic processes at the core of cell function, the researchers said.

“Hundreds of these vesicles may be initiating at any moment on the membrane, at the same time as myriad other processes are building, moving and recycling other structures in the cell,” said Kirchhausen, who is also senior investigator in the Program in Cellular and Molecular Medicine and the Immune Disease Institute at Boston Children’s Hospital. "We’re trying to understand this incredible complexity, building on a foundation of molecular thinking."

Their findings appear August 3 in Cell.

Vesicles are key to the functioning of life. For example, they allow neurotransmitters to travel across synapses and ferry bad cholesterol from the blood into cells, where it can be destroyed.

Researchers had generally believed that vesicles form on an as-needed basis, an orderly response to a specific signal. There’s even an old, yellowed cartoon taped to the wall in Kirchhausen’s lab illustrating the process with, “This is how it works!” handwritten in the margin.

Kirchhausen’s team, however, found that these vesicles form at random.

Francois Aguet, a co-author on the paper and a research fellow in the lab of HMS professor of cell biology Gaudenz Danuser said, “We believe that such stochastic behavior likely plays a role in most dynamic processes that we can see within the cell.”

The researchers say that this stochastic behavior relies on numerous, redundant, weak interactions rather than on a few carefully controlled chains of events. The researchers estimate that 70 percent of the clathrin scaffolds that begin to form fall apart before they form complete vesicles.

The initial steps in the formation of a clathrin-coated vesicle require two key materials: clathrin (which takes the form of three-legged molecules called triskelions) and its adaptor protein complex AP2, which allows the individual triskelions to stick together to form more complex structures.

Clathrin and AP2 molecules, which are weakly attracted to one another, constantly diffuse throughout the cell, regularly bouncing off the membrane. When an individual AP2 molecule hits the membrane it stays there for a few milliseconds at most.

“But if you happen to have the luck that at least two of those adaptors arrive to the membrane at the right time and place, they grab a clathrin and now it can stay there for a few seconds,” said Kirchhausen.

As more arrive, the cumulative bond grows stronger, increasing the chances that the structure will complete itself. Clathrin triskelions are fairly rigid, curved forms that fit together into a precise, interlocking ball with a layer of membrane on the inside. As the triskelions accumulate, held together by AP2, they form a curved dimple (also known as a pit) on the cytosolic (or intracellular) surface of the membrane, eventually pinching off a complete balloon that floats freely within the cell.

In order to film these events in real time, the researchers used genetically modified cell lines that caused clathrin and AP2 molecules to glow, capturing them with TIRF microscopy. The team corroborated their findings through additional bench and computational experiments.

New tools and new ways of seeing can lead to surprising results, Kirchhausen said. “In order to be able to figure this out, we needed to see what was happening when there were just one or two molecules around."

"We analyzed thousands of beginnings before we could understand whether there was a common pattern," said Emanuele Cocucci, HMS research fellow in cell biology in the Kirchhausen lab and first author on the paper.

Kirchhausen said that it is commonly believed that strong interactions tend to drive biological functions inside the cell, and that most processes unfold in a highly ordered and directed way.

“I am not so sure that that’s the case anymore. I think that most of the interactions that happen are fairly weak. So that gives the system flexibility,” Kirchhausen said.

This new perspective might help researchers think globally about how to, for example, find a drug that would block a particular molecule that might be important to a given disease.

Given the apparent chaos inside the cell, with multiple weak interactions and redundancy built into the system, “It’s not evident anymore that just by hitting a particular molecule you will get the perfect solution,” Kirchhausen said. You have to be quite careful, especially if you have other components that can come in and replace the one that failed.”

The research we supported by the National Institutes of Health, by a GlaxoSmithKline fellowship and a Swiss National Science Foundation fellowship. The authors declare that they do not have competing financial interests.