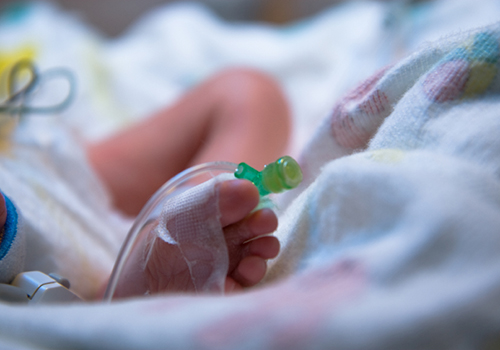 Preterm infants in neonatal intensive care units, particularly those with catheters and intravenous lines, are at high risk for bacteremia: bloodstream infections that can cause lasting brain injury.

A new study may change how people think about these infections. It suggests that inflammation is as important to address as the infection itself.

Using a novel mouse model of bloodstream infections in newborns, infectious disease physician-researcher Ofer Levy demonstrated that bacteremia can damage the brain even when the bacteria don’t actually get into the central nervous system. The findings were published in the Journal of Infectious Diseases.

“There has been a lot of indirect epidemiologic evidence for a link between bacteremia, inflammation and cerebral injury, but it showed only a correlation, not causation,” said Levy, Harvard Medical School associate professor of pediatrics at Boston Children’s Hospital.

“Here we demonstrate directly in an animal model that inflammation alone can cause brain injury in newborns with bacteremia, even without entry of the bacteria to the central nervous system.”

The team injected the bloodstream of newborn mice with Staphylococcus epidermidis, the most common cause of bacteremia in preemies. Other mice received only harmless saline injections. Using a model they developed, Levy and his colleagues injected the mice within the first 24 hours of life, while the mice still had an immature immune system resembling that of newborn human babies.

Even when the cerebrospinal fluid was clear of bacteria, Levy’s team showed surging levels of multiple cytokines—inflammatory factors—in the animals’ blood and increased levels of one cytokine, CCL2, in the brain, followed by later injury to the brain’s white and gray matter.

Levy and colleagues now want to examine whether they can prevent brain injury in their mouse model by blunting the bacteria-induced inflammation in addition to giving antibiotics. They’re particularly interested in antibiotic proteins and peptides: natural anti-infective compounds produced by the human innate immune system that kill bacteria while also binding to (and mopping up) bacterial toxins that cause the inflammatory response.

“Newborns tend to be deficient in natural antimicrobial proteins and peptides, and dead bacteria can still induce inflammation,” said Levy. “Our hypothesis is that by giving anti-infective proteins and peptides back to the newborn, along with antibiotics, we could clear the bacteria and inhibit the inflammatory response to their toxins, thereby reducing brain injury.”

Some anti-infectives have been in clinical trials already. If this approach works in mice, the next step would be to test it in nonhuman primates and eventually in human studies, said Levy.

He also hopes to use the mouse model to see if the results are the same with other common pathogens.

Xiaoyang Wang and Carina Mallard of the University of Gothenburg (Sweden) were co-senior authors on the study.