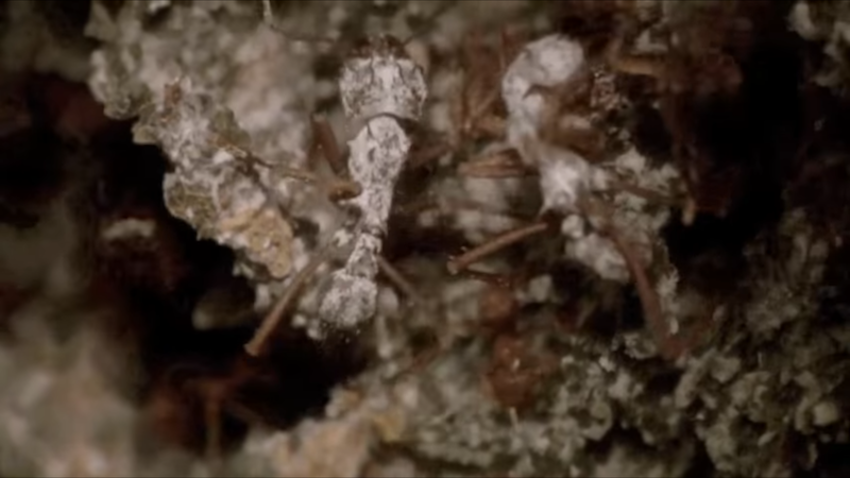 Leaf-cutter ants tend their fungus garden. Bacteria like those studied in this paper can be seen as a powdery white substance on some of the ants’ bodies. Video: Michael Thomas-Poulsen and Ammonite

Researchers peering into the complex ecosystems of leafcutter ants in Panama and Costa Rica have discovered three previously unknown molecules produced by bacteria living on the ants’ bodies.

Although the molecules are almost identical, the structures of the bacterial genes that produce them are vastly different. The findings, reported in PNAS, suggest an interesting way bacteria in various ant colonies exchange and evolve new molecules with new functions—possibly including natural antibiotics and antifungals.

“We’ve found at least two snapshots of the evolutionary history of this molecule, which is very difficult to do,” said Antonio Ruzzini, a postdoctoral researcher at Harvard Medical School and co-first author of the study.

“It’s stunning to find near-identical chemistry being produced by ant-associated bacteria that are so geographically separated,” added HMS postdoctoral researcher Clarissa Sit, the other first author of the study. “It made us curious about how the bacteria produce these molecules and whether they use the same strategies to do so.”

All in the family

Ruzzini and colleagues are interested in studying these ecosystems in large part because the ants’ bacterial partners belong to the phylum Actinobacteria, which make compounds that have led to most of the antibiotics we use today.

“These kinds of small molecules—not these particular three, but things like them— have been very useful as antibiotics, anticancer agents and immune system modulators,” said Jon Clardy, the Hsien Wu and Daisy Yen Wu Professor of Biological Chemistry and Molecular Pharmacology at HMS and senior author of the paper. “Yet they are only a fraction of 1 percent of all the kinds of organic molecules that exist in the world.”

Clardy and others have long wondered: Why have the molecules produced by Actinobacteria been so successful in becoming drugs?

“The simple answer is that they have an evolutionary history,” he said. “And we don’t know anything about that history. Most of these molecules are isolated from soil or marine samples without any context as to their original niches. This study was really an attempt to look at one specific niche and try to begin to figure out where some of these molecules came from and what their predecessors were likely to be.”

In the case of the leafcutter ants, researchers do know that during more than 45 million years of symbiosis, the bacteria have evolved to produce specific compounds to kill “bad” fungus that threatens the “good” fungus the ants cultivate for food.

Each colony of the more than 200 kinds of fungus-farming ants may host a different strain of bacteria that makes different molecules to fight a different fungal invader, so it wasn't a shock when the researchers found that two bacterial species from separate ant colonies produced three closely related molecules, which they called gerumycins.

What did surprise them was that the structures and locations of the genes that produced the gerumycins varied so greatly between the two types of bacteria.

“When you see the same molecules made by multiple organisms, you want to assume that they arise from the same genetic contexts,” Ruzzini explained.

Instead, when they sequenced the genomes of the bacteria, the researchers found that although the DNA sequences themselves were virtually identical, in one bacterial species the genes were located on a plasmid (a circular DNA fragment that can replicate independently of chromosomes), while in the other species the genes were on a genomic island (a portion of DNA that looks different from the surrounding genome and likely came from another organism).

In addition, the genes in the second species occurred in a single cluster that is typical for bacteria, but those in the first species were found in unusual split clusters.

Analyzing the structures of the gene clusters and understanding the context in which the bacteria live in nature allowed the team to make some inferences about how and when the bacteria acquired the ability to make gerumycins.

For example, said Ruzzini, each bacterium probably acquired the genes independently from “some other, perhaps even non-ant associated, bacterium.”

“It suggests that these genes are moving around in the environment from bacterium to bacterium,” he said. “These bacteria on the exoskeletons of ants can sample genes from the environment, which in some cases can provide chemical defense.”

Clardy’s team hasn’t yet determined the role of the three new molecules, but the likelihood that the genes are being transferred from colony to colony makes the researchers suspect they’re important for the ants in some way.

He also suspects that what they found isn't an anomaly.

“Since it was literally the first time we looked, I don’t think it’s a fluke to see the same pathway occur in so many different genomic contexts; I think it’s the way this normally happens,” Clardy said. “We were just mistaken in how we thought this works.”

The team continues to sample bacteria in more ant colonies and is expanding the search into Brazil, where the ants’ evolutionary tale began. “That’s where the whole system originated—in the Amazon,” said Clardy.

In addition to their curiosity about evolution, the researchers are on the hunt for natural antifungals. Clardy is co-principal investigator of a project between HMS, the University of Wisconsin and the University of São Paulo that last year received a $5.2 million grant to search for natural products in the Brazilian ant colonies.

In fact, they came close with the current study; the molecules they discovered turned out to be related to dentigerumycin, an antifungal compound made by bacteria in other fungus-farming ant colonies in South and Central America. Unfortunately, the gerumycins didn't display the same antifungal activity.

“Instead, we got our first look into this natural history question, which was an invaluable opportunity,” said Ruzzini.

This study was supported by National Institutes of Health grants R01GM086258 and U19AI09673. Additional co-authors on the study included Cameron Currie of the University of Wisconsin, who originally discovered the role of Actinobacteria in helping insects fight pathogens. 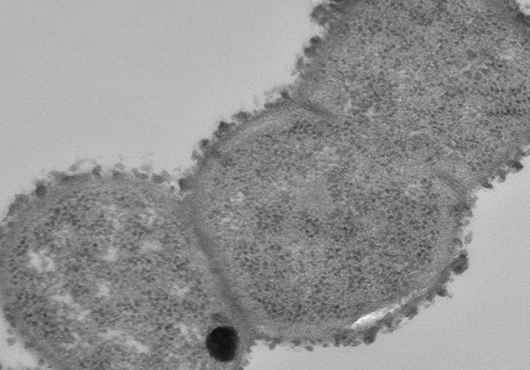 Parasites Suck It Up