The Women Before Me

An online exhibit of honor wall portraits of HMS alumnae

The physical exhibit of oil-on-canvas portraits by Pamela Chen, MD ’21, is on display in the Student Study Center in the Tosteson Medical Education Center at HMS.

After emigrating from Peru, Dr. Cohen graduated with the first coeducational class at Harvard Medical School in 1949. A Distinguished Life Fellow of the American Psychiatric Association and Professor Emerita of Psychiatry at the University of Miami Medical School, Dr. Cohen has been hailed for her work in multiple Latin American natural disasters, the Cuban Mariel refugee crisis, and the 9/11 attacks. She is an international leader in mental health interventions for survivors of disasters.

Dr. Moreno-John is a Professor of Medicine at the University of California San Francisco within the Division of General Internal Medicine. Being a first-generation Mexican American and the first in her family to go to college, she deeply believes in supporting underserved people. She has dedicated her primary care clinical focus and research to the health of older Latino and African American patients, which led her to cofound the Social Justice Committee in her division.

Dr. Higginbotham is the Vice Dean for Inclusion and Diversity at the Perelman School of Medicine at the University of Pennsylvania, a Senior Fellow of the Leonard Davis Institute, and a Professor of Ophthalmology. Author of over 100 articles and co-editor of four textbooks, she has held multiple leadership roles, including Senior Vice President for Health Sciences at Howard University, Dean of the Morehouse School of Medicine, and first female chair of an academic ophthalmology department in the United States. Her many honors include the Senior and Life Achievement Awards of the American Academy of Ophthalmology.

Dr. Lee is a surgical oncologist and clinical Professor of Surgery at the University of Hawaii Medical School, Honolulu. Having grown up in a war-torn country, she remains dedicated to bringing care to the most vulnerable on a global scale. She has participated in over 50 international medical missions and was a colonel in the U.S. Army Corps, treating both U.S. soldiers and Iraqi prisoners of war. She has authored a book and hundreds of scientific articles on surgical oncology. Among other honors, she recently received the American College of Surgeons’ Mary Edwards Walker Inspiring Women in Surgery Award for her service.

Artwork on campus can be a powerful, unspoken representation of a school’s ethos—who belongs, who is valued, who is seen. As the medical student body continues to diversify, institutions must interrogate not only their faculty recruitment, promotion, and retention practices but also the implicit messages communicated by the portraits on their walls.

The first step to being seen as a leader is to be seen at all.

Part celebration and part critique, this oil portrait series and creative arts scholarly project highlights just five out of the many accomplished alumnae of Harvard Medical School, beginning with its first coeducational class in 1949. These are women who represent multiple career paths and intersections of identity, who surmounted barrier after barrier to attain leadership positions in academic medicine, and who dedicated their careers to helping the vulnerable and voiceless. Taken together, their interviews emphasize the shared, structural, and invisible inequalities faced by women in medicine and show how far we still need to go.

In using the classic medium of oil portraiture, the artist then turned each of their stories into a likeness. The vibrant, abstract backgrounds (subtly referencing bookshelves, fundoscopy, histology) provide a sense of color, light, and optimism and draw the viewer’s focus to the internal psychology of each woman. Their resilience. Their setbacks. Their hard-won confidence.

Pamela Chen was born in Boston, Massachusetts, in 1994, graduated from Harvard College in 2016 and from Harvard Medical School in 2020. Her love of art and medicine has always been informed by a deep desire to understand the human condition.

She is currently a clinical fellow in pediatrics at Boston Children's Hospital, where she is embracing the intellectual and emotional challenge of caring for the sickest of sick children. She plans to continuously work against the structural barriers impeding her future patients, colleagues, and trainees from achieving their fullest potential—through every medium available. 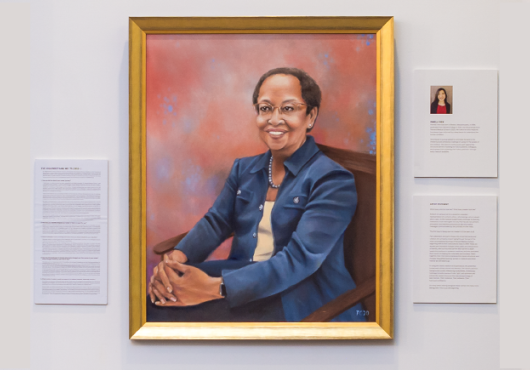 Belonging in the Halls of Medicine