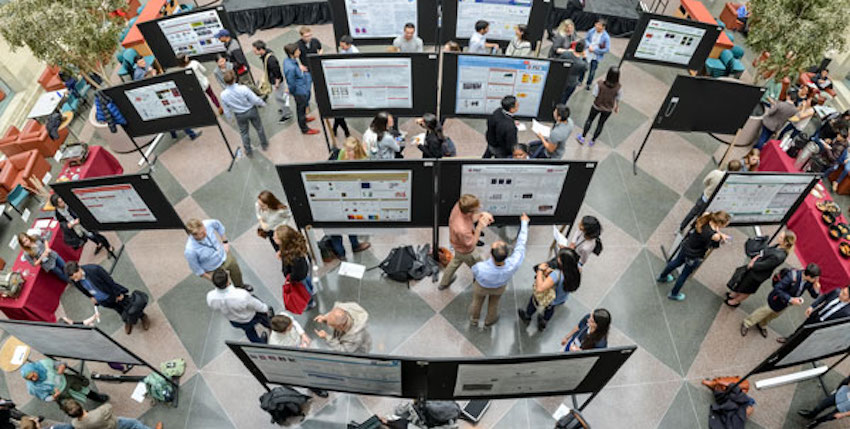 Melis Anahtar can tell you how frustrating—and rewarding—scientific research can be.

After working for a year on developing assays for an HIV research project in the laboratory of her mentor, Douglas Kwon, HMS assistant professor of medicine at Massachusetts General Hospital, the clinical samples on which the pair had planned to carry out the experiments turned out to be unusable.

But Anahtar pushed on after what she felt was a failure.

With Kwon’s enthusiasm and support for a new study, Anahtar’s PhD project, which explored how conditions in the vaginal microbiome contribute to how women acquire HIV, “turned out great after all,” she said.

Anahtar was one of dozens of students presenting their work at the Harvard-MIT Health Sciences and Technology Forum at Harvard Medical School in April.

“The PhD is a really amazing time of development of the student as a scientist and as a person.” —Douglas Kwon.

The mentor-student relationship is a special feature of the HST curriculum, as is the biomedical research component. All HST students pursue independent research under the direction of a faculty member. The annual HST Forum gives students the opportunity to present their work and findings.

Thirty posters were presented in the TMEC Atrium, showcasing student research that took place in the labs of HMS investigators on the HMS Quad, at MIT and at several HMS-affiliated hospitals and institutions.

Working in the lab of Diane Mathis and Christophe Benoist in the HMS Department of Microbiology and Immunobiology, HST student Kathy Wang investigated the possible role that sensory neurons play in promoting muscular regulatory T cells (Tregs) after pain or injury through the cytokine IL33.

By better understanding the process, she said, there is an increased possibility of developing therapies that promote muscular Tregs, and that could have implications for Duchenne muscular dystrophy or possibly for mitigating the effects of aging.

HST student Travis Hughes, working with his mentor Alex K. Shalek and others in a lab at the Ragon Institute of MGH, MIT and Harvard, was instrumental in bringing a low-cost, portable platform for single-cell RNA sequencing from a concept to a unit that is now shipping to clinicians and researchers in resource-poor settings, such as Malawi, South Africa and Thailand.

The system can be used on location to process fresh biopsies from patients infected with bacteria and viruses in a matter of hours, empowering clinicians at the center of epidemics including HIV, tuberculosis and malaria.

“Being able to work with people on the front lines will allow us to understand infectious ecosystems,” said Hughes. Shalek’s lab hopes that researchers will be able to use the data to help develop better therapeutic and prophylactics for fighting outbreaks.

Falling in love with neuroscience and pursuing a PhD was not part of the original plan for her medical career, but HST student Allison Hamilos became immersed in research. She presented her work, done in John Assad’s neurobiology lab on the timing of self-initiated movement in a mouse model.

Approximately 40 percent of HST MD students pursue a PhD in addition to their medical training. Hamilos took a neurobiology course and became excited about the idea of doing intensive research in the field.

“As soon as I made up my mind to do it, I was in love with the idea. It’s going to change my life,” she said.

A legacy of mentorship

Following the poster session, students and faculty gathered in the London Society’s homeroom, TMEC 209, for talks by Kwon and Anahtar.

“The plenary session format was developed to better highlight a unique feature of the HST community—the mentor-student relationship,” said Emery Brown, the Warren M. Zapol Professor of Anaesthesia at Mass General, who introduced the program.

Irving London, cofounder of the HST program and mentor to generations of students, was present. “He never misses an HST event,” said Brown.

Anahtar was the first graduate student in Kwon’s newly formed lab. And her work is part of the FRESH (Females Rising through Education, Support and Health) study, which enrolls women in sub-Saharan Africa at risk for contracting HIV in programs that provide health care services such as blood tests and pelvic exams.  The study also aims to alleviate poverty, a significant risk factor for acquiring HIV, by providing schooling and job training.

Kwon gave credit to Anahtar for being instrumental in getting the FRESH study up and running. Her work in Africa included teaching courses in reproductive health, writing sample-collection protocols for nursing staff and developing relationships with African scientists, he said.

“We learned from scratch, together, to sequence the microbiome and analyze the data,” Anahtar said.

Kwon said what he appreciates now is that, as the student is growing, the PI in the lab is also growing and learning.

“So, this is a journey that is shared,” he said.

“The PhD is a really amazing time of development of the student as a scientist and as a person,” said Kwon.

He added that being a part of Anahtar’s growth has been “enormously rewarding.”

Poster prizes were announced after the plenary talks.

Allison Hamilos: Determining the Role of Direct and Indirect Pathway Balance in the Timing of Self-Initiated Movement 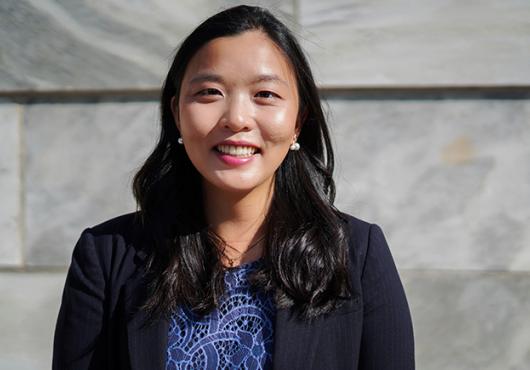 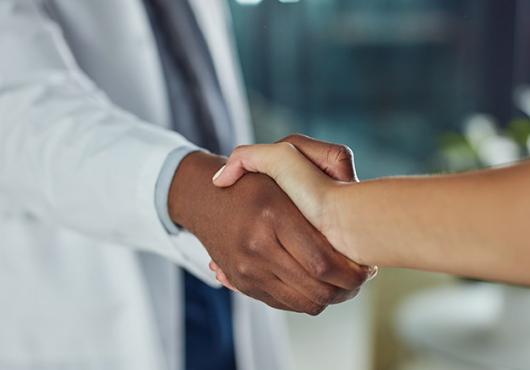 In a new curriculum program this year, entering HST students had the opportunity to meet patients... 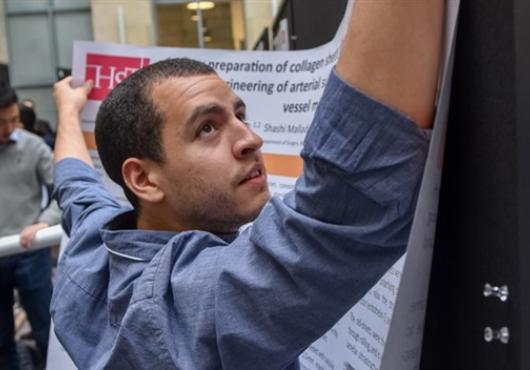 Dozens of students present their biomedical research to faculty and their peers at the Harvard-MIT...