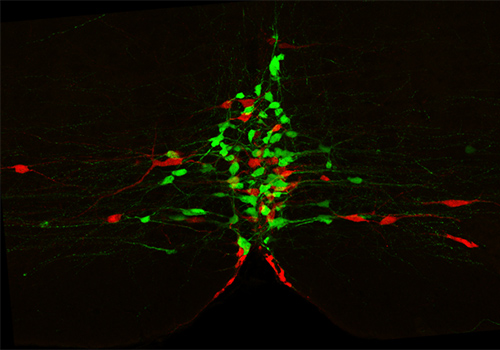 Two subtypes of serotonergic neurons, one marked green and one marked red, intermingle in a mouse brain stem, yet have different functions. Image: Rachael Brust

Name a physiological function, and it seems the neurotransmitter serotonin has a hand in regulating it.

A single class of brain cells produces serotonin. In trying to understand how these serotonergic neurons do so many jobs, neuroscientists have proposed that they come in different subtypes that have different properties and responsibilities. However, technological limitations have made it hard to prove the hypothesis.

Now, thanks to new genetics tools, Harvard Medical School researchers and their collaborators have identified many different molecular subtypes of serotonergic neurons in mice and shown that these subtypes can be linked to different functions and different brain circuits.

Specifically, they found that one subtype is responsible for increasing breathing when too much carbon dioxide builds up in the body: Egr2-Pet1 neurons.

“Historically, neurons have been classified based on neurotransmitter type and physical location. By applying molecular, genetic, electrophysiological and behavioral approaches, we in the neuroscience community are realizing it’s much more complex,” said Susan Dymecki, professor of genetics at HMS and senior author of the study.

The findings, published in Cell Reports, provide new ways to think about developing drugs for serotonin-related disorders, such as by targeting only the relevant serotonergic neuron subtype and thus reducing the risk of potentially life-threatening side effects.

“You don’t want to tamper with fundamental cardiorespiratory or thermoregulatory processes when trying to treat clinical depression, for example,” said Dymecki.

In addition to the potential for improved therapies, the study takes a step towards more informed ways to diagnose or assess risk for a range of serotonin-related disorders.

Part of the motivation to conduct this study came from Dymecki’s collaborations with Boston Children’s Hospital neuropathologist Hannah Kinney and others who analyze brain stem tissue samples from infants who had died of SIDS.

Many SIDS cases display abnormalities in serotonergic neurons, which are located in the brain stem. That makes Dymecki and collaborators wonder whether a problem with serotonergic neurons that regulate breathing could help provide a neurobiological explanation for SIDS risk.

The current project “was a wonderful marriage of our genetics tools, our interest in studying development and neuronal systems in the brain stem, and the opportunity to have an impact on how we think about a devastating infant disorder,” said Dymecki.

Combining the expertise of a team of physiologists, electrophysiologists, mouse geneticists and molecular biologists made it possible to dial down serotonergic neurons one subtype at a time in mice and determine which ones affected the carbon dioxide breathing response.

None of the subtypes they identified played a role except Egr2-Pet1 neurons; not even another subtype nestled within the same tissue.

That discovery taught the team that “in a given anatomical region, there can be great heterogeneity within a cluster of neurons that make the same neurotransmitter,” said Rachael Brust, a graduate student in the Dymecki lab and first author of the paper. “You can have serotonergic neurons sharing the same microenvironment but doing very different things.”

The team proposed that the functional distinctions among subtypes arise largely from the cells’ developmental lineage, rather than their location in the brain.

The researchers were then able to determine some of Egr2-Pet1 neurons’ specific chemical and electrical properties.

Further experiments revealed that Egr2-Pet1 neurons signaled to an area of the brain that integrates sensory information and then relays it to an area that unconsciously sets breathing rhythm.

According to Dymecki, this population of serotonergic neurons can be considered a sensor for high carbon dioxide and low pH and an effector for increasing respiratory drive and, ultimately, breathing.

“Not only is that important for understanding and treating illness, it’s also exciting on a basic science level,” she said.

“This is the first time we’ve been able to march through and query different molecular subtypes of serotonergic neurons, map a function to one specific subtype and reveal it has unique properties,” she said.

“If we can decipher the individual units that serve different tasks and modulate different circuits to give rise to the breadth of activity of this neuronal system, then we can have an impact on many clinical diseases. That would be tremendous.”