Arteries in a mouse brain dilate in response to local neural activity. This process, known as neurovascular coupling, is regulated by signals released by arteries. Animation: Gu Lab/Harvard Medical School

The brain is a ravenous organ. A three-pound adult human brain consumes about a fifth of the body’s energy, yet it cannot store energy on its own and requires constant nourishment from the cardiovascular system. The organ’s energy needs fluctuate greatly depending on neural activity, and sufficient blood must be delivered to the right place at precisely the right time to ensure healthy brain function.

To meet these ever-shifting demands, a process known as neurovascular coupling rapidly increases blood flow to areas of heightened neural activity. This process is impaired in conditions such as hypertension, diabetes and Alzheimer’s disease, and also serves as the foundation for imaging technologies such as fMRI, which uses blood flow as a readout for brain activity.

Despite its importance, it was unclear how the brain and blood vessels communicate to enable neurovascular coupling. Now, in a study published in Nature on Feb. 19, Harvard Medical School neuroscientists report the discovery of a control mechanism in the brains of mice that ensures adequate blood flow to areas of heightened neural activity in a rapid and precise manner.

Their experiments reveal that arteries in the brain actively regulate neurovascular coupling in response to neural activity, and that the protein Mfsd2a, previously implicated as a key regulator of the protective blood-brain barrier, is critical for this process. The findings shed light on mechanisms that enable new avenues of study into the role of neurovascular coupling in neurological diseases.

“We now have a firm handle on the mechanisms involved in neurovascular coupling, including its molecular, cellular and subcellular components, which we’ve never had before,” said senior study author Chenghua Gu, professor of neurobiology in the Blavatnik Institute at HMS and a Howard Hughes Medical Institute faculty scholar.

“This puts us in a position to dissect this process and determine, for example, whether the neurovascular coupling impairments that we see in diseases like Alzheimer’s are the result of a pathology or the cause,” Gu said.

In previous studies, Gu and colleagues demonstrated that the protective integrity of the blood-brain barrier is ensured by the protein Mfsd2a, which suppresses the formation of caveolae—small lipid bubbles containing signaling molecules—from capillaries in the brains of mice.

To their surprise, they found that arteries, which carry nutrient-rich blood from the lungs and account for around five percent of the blood vessels in the brain, had the opposite characteristics as capillaries. Arteries lacked Mfsd2a and exhibited high amounts of caveolae.

The team specifically blocked endothelial cells that make up the lining of arteries from forming caveolae, by forcing these cells to express the normally absent Mfsd2a. This again resulted in significant impairments to neurovascular coupling, demonstrating the importance of caveolae in the arteries. 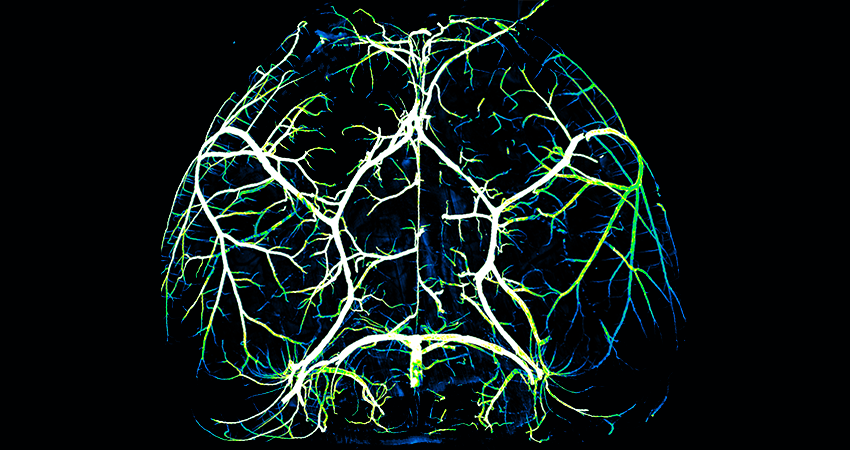 Additional experiments demonstrated the unique role of arterial endothelial cells. It was previously known that neural activity relaxes the smooth-muscle cells that surround arteries, which leads to vessel dilation and increased blood flow. In contrast, the results of the current study revealed a different mechanism in which caveolae in arterial endothelial cells enable neurovascular coupling by relaying the signal to relax from neurons to smooth-muscle cells.

“For over a century, we’ve known that this phenomenon exists, where neural activity rapidly increases blood flow in a very local and temporally precise manner,” Chow said. “But the mechanisms for how the nervous system talks to the vascular system to coordinate this event were largely unknown, and it was extremely surprising to find that arterial endothelial cells play such an active role in the process.”

When both caveolae and nitric oxide signaling were blocked, the team saw a complete absence of neurovascular coupling. Each mechanism appears to play an equally important but independent role in regulating blood flow in response to neural activity. This finding suggests that caveolae in arteries may be responsible for more precisely targeted increases in blood flow, whereas nitric oxide acts more broadly, the authors said.

Gu and colleagues are now investigating the exact composition of the signaling molecules contained within caveolae to better understand this process. The researchers said they hope that the newly revealed mechanistic underpinnings of neurovascular coupling will enable new experimental approaches to study the biology of this process and how it goes awry in disease.

“For example, even if increased local blood supply is impaired, the brain still has blood flow and oxygen. What is the impact of this on neurons? How does this affect brain function? And does it contribute to conditions like neurovascular dementia?” Gu said. “We are now in the position to perform rigorous science that could allow us to answer questions like these.” 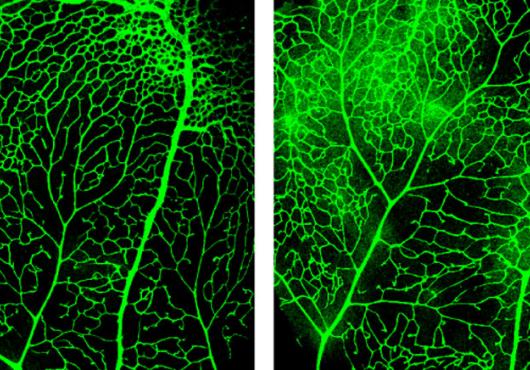 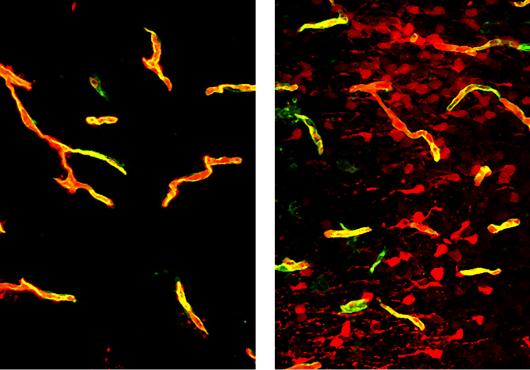