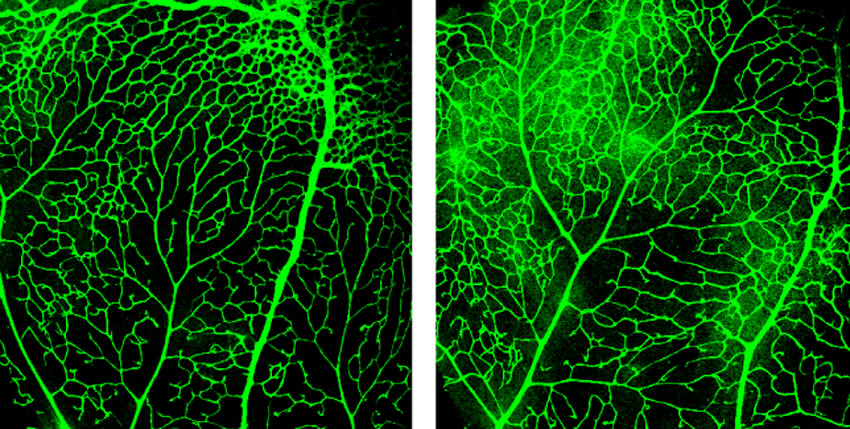 Normal blood vessels in the retina completely contain a fluorescent dye (left). Introducing a genetic mutation that prevents the protein vitronectin from binding to its receptor on the blood-brain barrier causes the barrier to become more permeable, allowing the dye to leak out of the vessels (right). Image: Ayloo et al., Neuron 2022

The blood-brain barrier plays an essential role in protecting the central nervous system from harmful bacteria, toxins, and other blood-borne pathogens.

Composed of a tight network of endothelial cells, the barrier is semipermeable and highly selective. It allows small molecules and nutrients to pass from the blood into the central nervous system, while blocking substances that might cause infection, inflammation, and otherwise disrupt the system’s delicate balance.

Breaking Through the Barrier

However, what exactly controls the permeability of the blood-brain barrier is a question that has long bedeviled scientists—and one that Chenghua Gu, professor of neurobiology in the Blavatnik Institute at Harvard Medical School and a Howard Hughes Medical Institute investigator, has been studying for almost a decade.

Previously, Gu and her team at HMS established that a cellular trafficking system called transcytosis plays a key role in controlling blood-brain barrier permeability by determining how easily molecules can be transported across it. Now, new research in mice has revealed more details about how this process is regulated.

In this new research, published March 15 in Neuron, the scientists describe a mechanism by which cells in the surrounding environment, or microenvironment, signal to cells that make up the blood-brain barrier. They found that this intercellular communication inhibits transcytosis to keep the barrier less permeable and ensure that molecules cannot easily pass through.

Not only that, but the mechanism offers a potential avenue for manipulating the barrier to make it more or less permeable, the authors of the study said. If the findings are replicated in further animal studies and then in humans, they could point to new ways of treating diseases or delivering medicines into the brain.

Contrary to what its name might suggest, the blood-brain barrier is not simply a wall that physically blocks harmful molecules from crossing into the central nervous system. Rather, it acts more like a self-regulating filtration system, and its permeability changes based on the properties of the endothelial cells it’s made of.

In 2014 Gu and her team identified a gene called Mfsd2a, which suppresses transcytosis, the process by which molecules cross the blood-brain barrier in bubbles called vesicles that are formed in endothelial cells. This suppression maintains the integrity of the barrier by ensuring that molecules aren’t transported across endothelial cells. Building on this work, in 2017 Gu’s team revealed that transcytosis may, indeed, be the main mechanism that controls the permeability of the blood-brain barrier.

However, Gu and colleagues suspected there was more to the story. They began to wonder how the permeability of the blood-brain barrier is affected by the surrounding microenvironment, which is composed of cells that are physically close to the blood vessels in the central nervous system. More specifically, they became interested in adjacent neural cells called pericytes that wrap around these blood vessels.

“We started off asking what are the cells in the microenvironment that could be conferring these barrier properties to endothelial cells. And a lot of history and other work prompted us to look at pericytes,” explained lead author Swathi Ayloo, who conducted the research as a postdoctoral fellow at HMS and is now a senior scientist at Sanofi.

The researchers began by sifting through RNA databases for genes highly expressed in pericytes of the retina and the brain. They identified a gene in pericytes that makes a protein called vitronectin, found in the microenvironment of the central nervous system. Then, they turned to the retina to test the importance of vitronectin in maintaining the blood-brain barrier. The retina is an ideal model system, Ayloo explained, because in the first few days after a mouse is born, the blood-retinal barrier is still permeable on the outer edge of the retina, but impermeable in the middle, setting up an easy comparison.

“That set the stage for us to say, OK, we know that vitronectin is important for barrier permeability, but why is it functioning like this, what is the mechanism,” Ayloo said.

Through a series of genetic experiments in mice, the researchers established that vitronectin binds to a receptor called integrin α5 in endothelial cells to form a signaling pathway. This signaling pathway inhibits transcytosis by telling endothelial cells in the blood-brain barrier to maintain the tension of their membranes, which prevents the formation of vesicles that can transport molecules across the barrier.

“When we zoom out, it totally makes sense, because this mechanism is basically controlling the biophysical properties of the membrane, and that determines how easy or how difficult it is to form those vesicles,” Gu said.

“The big punch line is that there is this very active ligand-receptor signaling between pericytes and endothelial cells, and you need that active interaction for the maintenance of the barrier,” Ayloo added.

Gu describes the microenvironment, also known as the extracellular matrix, as “a really mysterious thing” that is present around all tissues yet is exceedingly difficult to study. For her, the paper not only reveals a specific mechanism in the microenvironment that controls permeability of the blood-brain barrier, but opens the door for more research on cellular signaling in the extracellular matrix.

Moreover, the extracellular matrix is known to break down in neurodegenerative diseases such as multiple sclerosis.

“That's one of the hallmark features of neurodegenerative diseases, so I think we need to do more extracellular matrix research,” Ayloo said. She added that there are many protein-to-protein interactions between the microenvironment and the blood-brain barrier that need to be better understood, especially within the context of disease.

“You cannot just put endothelial cells together in an in vitro model and claim that this is the blood-brain barrier,” Gu said. “Billions of dollars are being spent on inaccurate models.”

Once researchers identify the full collection of proteins in the microenvironment that influence the permeability of the blood-brain barrier, she added, “we can re-create those factors in a model to more accurately mimic the barrier.”

If the findings are affirmed in further experiments and, eventually, in humans, the specific interaction between vitronectin and integrin α5 may offer a new molecular target for manipulating the permeability of the blood-brain barrier.

Gu estimates that around 90 percent of retinal diseases are related to barrier leakage, necessitating treatments that make the barrier less permeable—something that also appears to be true for certain neurodegenerative diseases. On the flip side, in some conditions, the barrier needs to become temporarily more permeable so that medicines can be delivered into the brain.