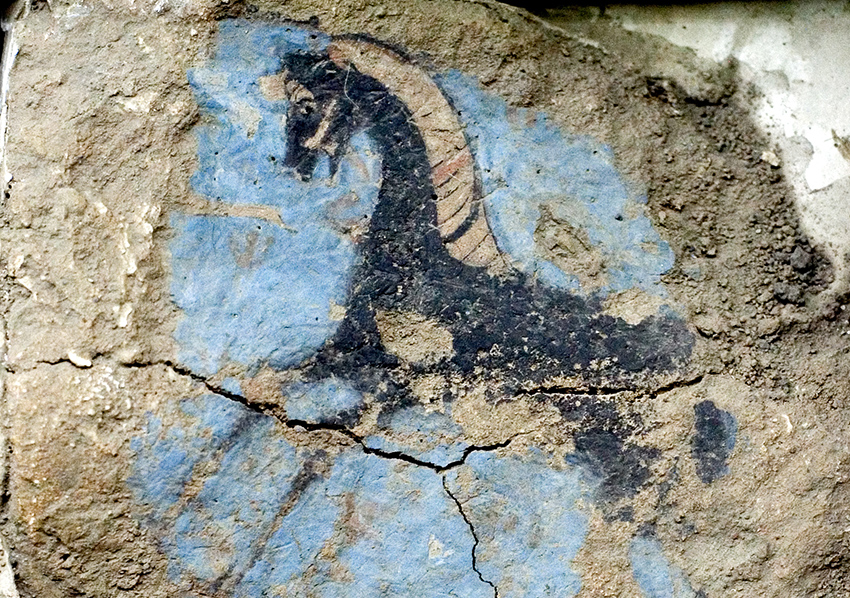 Fresco of a horse from the ancient kingdom of Urartu in what is now Armenia and Turkey. The new DNA analyses included several individuals associated with the kingdom. Image: EvgenyGenkin/CC BY-SA 3.0

Growing up in Greece, Iosif Lazaridis shared his compatriots’ appreciation that they lived in “the crossroads of Europe and Asia,” past and present.

To the east lay Turkey and Armenia, gateways to the Near East and Asia. To the north were the Balkans, leading the way into central Europe.

Lazaridis wondered how people in these regions were related to one another. Who shared long-ago ancestry with whom? How might those forebears have moved around this part of the world and had children with one another throughout millennia? How deeply connected were their modern descendants despite national borders and political conflicts?

In-depth stories on science and medicine

Many people moved to Greece from the Balkans after the collapse of the Soviet Union, and many Greeks descend from refugees who came from Turkey in the early 20th century, Lazaridis knew. “Surely these changes that happened as I was growing up and that I heard about from old people were just the tip of the iceberg of what had happened in the centuries before,” he said.

The questions simmered at the back of Lazaridis’ mind as he moved to California to earn a PhD in information and computer science. They followed him to Boston, where he joined the lab of geneticist David Reich at Harvard Medical School.

There, he and colleagues around the world began to unearth answers through the study of ancient DNA.

Now, Lazaridis is co-first author of a trio of papers, published Aug. 25 in the journal Science, that tell the most complete story yet of ancestry in this pivotal part of the world.

The studies describe 15,000 years of genetic history in what the team has dubbed the Southern Arc: the lands sweeping from southeastern Europe into the Middle East, encompassing more than a dozen countries from Romania and Serbia through Greece and Turkey into Armenia, Azerbaijan, Iran, Lebanon, and Israel.

Featuring the genomes of more than 1,300 ancient people, 727 of them sequenced for the first time, the work represents one of the largest analyses to date of ancient human DNA.

“Often there’s an artificial distinction between Europe and Asia that people make,” said Lazaridis, research fellow in genetics at HMS who serves as a staff scientist in the Reich lab. “For these studies, we said, we have a bunch of people who are neighbors; let’s forget about such preconceptions and try to figure out how they’re all related and who moved where across time.”

In addition to illuminating shifts in different populations’ genetic makeup across the centuries, the analyses provide fresh genetic insights into old mysteries such as the identities of Minoan and Mycenaean peoples and the geographic origin of Indo-European languages.

“This is a major leap forward in the field and a milestone in terms of richness of data from this complex region,” said co-senior author Reich, professor of genetics at HMS and professor of human evolutionary biology at Harvard University. “Some very striking stories emerge thanks to the power of ancient DNA in large sample sizes.”

The results were made possible by collaboration across borders and specialties. The Reich lab partnered with researchers at the University of Vienna to lead a 206-person team based in more than 30 countries.

“These studies were accomplished through a huge amount of raw human effort,” said Lazaridis.

“One amazing thing about these papers is they represent cooperation between countries where it’s historically been difficult to get along, such as Greece, Turkey, Armenia, Albania, Bulgaria, and North Macedonia,” said Reich. “Navigating that was a complex issue.”

Until a few years ago, it was difficult or impossible to recover DNA from ancient people buried in regions like the Middle East because heat degrades the delicate material. The discovery in 2015 that an inner-ear bone does an exceptional job of preserving DNA and the development of new sequencing and analytic techniques threw open the doors to studying large collections of ancient DNA from previously inaccessible environments.

Co-authors in different fields worked together to interpret the findings in light of what was already known through archaeological evidence, ancient texts, and other materials. Some of the discoveries add detail to existing histories. Others fill in gaps. Still others challenge conventional theories.

“Once you look at this many individuals across space and time in an expansive view, you start seeing connections you couldn’t if you focused on only one site or period,” said Lazaridis.

“These findings are another example of how archaeogenetic results can provide a missing layer of information that cannot be obtained from other sources,” said Alpaslan-Roodenberg.

For Lazaridis, the papers provide a jumping-off point for yet more investigations even as they scratch his lifelong itch to know more about the people who live beside one another today.

“It’s tremendously satisfying that people from countries that haven’t seen eye to eye can engage in a study of the past that shows that all these conflicts are the last episode of long histories that are very linked,” he said. “Sure, there are differences, but if you go back in time you begin to appreciate the deep connections among people. That’s a good thing to know from this kind of data.”

The work followed ethical guidelines proposed last year by an international consortium that included co-authors of the current studies.

The studies were funded by the National Institutes of Health (grants GM100233 and HG012287), the John Templeton Foundation (grant 61220), a private gift from Jean-Francois Clin, the Allen Discovery Center program (a Paul G. Allen Frontiers Group advised program of the Paul G. Allen Family Foundation), and the Howard Hughes Medical Institute. Additional support is outlined in the Southern Arc paper.