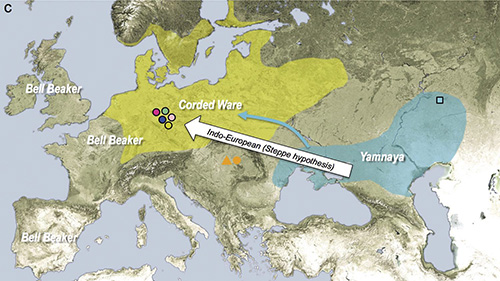 Geographic distribution of the archaeological cultures Yamnaya and Corded Ware, which a new study found to be genetically similar, and possible vectors of the spread of Indo-European languages into Europe. Image: Wolfgang Haak

Scholars have spent centuries trying to trace the roots of these varied but related tongues. One longstanding question has been how, when and by whom a reconstructed precursor language called proto-Indo-European was brought into Europe.

Lately, the debate has come down to a tug-of-war between the “Anatolian hypothesis,” which posits that farmers from what is now Turkey brought proto-Indo-European with them along with agriculture when they migrated into Europe between 8,000 and 9,500 years ago, and the “steppe hypothesis,” which points instead to herders on the Eurasian steppe between 5,000 and 6,000 years ago.

There’s no evidence of a significant migration from the steppe into Europe, say Anatolian proponents. Tug.

So far the Anatolian side has been holding its own. But researchers bearing new genetic evidence have just given a mighty heave toward the steppe side.

By analyzing the genomes of 94 ancient Eurasians, an international team led by scientists at Harvard Medical School and the Australian Centre for Ancient DNA at the University of Adelaide has uncovered evidence that the steppe herders did undergo a major migration into Europe.

This means the herders were responsible for bringing at least some Indo-European languages to the area, the team argues.

“These results challenge the theory that all Indo-European languages in Europe today owe their origin to the arrival of the first farmers from Anatolia more than eight thousand years ago,” said David Reich, professor of genetics at HMS, associate member of the Broad Institute of Harvard and MIT and senior author of the study.

The study was published online March 2 in Nature. An earlier version of the paper was posted in February at biorxiv.org.

“It’s like a detective story,” said Iosif Lazaridis, a postdoctoral researcher in the Reich lab and co-first author of the paper along with geneticist Wolfgang Haak of ACAD.

“We’re seeing the aftermath of what happened in Europe thousands of years ago. We have clues that these different people were linguistically and genetically related. It’s difficult to figure out how unless we go back to ancient DNA,” Lazaridis said. “It’s very contested because there’s no hard evidence. They didn’t write.”

Haak, Lazaridis, Reich and dozens of collaborators from around the world advanced the debate by producing genome-wide data from an unprecedented number of ancient human genomes at once. They sequenced the remains of 69 Europeans who lived 3,000 to 8,000 years ago—twice as many as have been sequenced before—using a technique that targeted and amplified about 400,000 potentially relevant genetic variants.

“We isolated parts of the genome that are most informative about history and sequenced only those,” said Reich, who is also a Howard Hughes Medical Investigator. “The ability to collect whole-genome data from dozens of individuals at once in this way reflects a sea change in ancient DNA studies.”

The team combined this information with 25 previously published ancient human genomes and made several new discoveries.

First, they examined evidence related to the arrival of Europe’s first farmers in Spain and Germany about 7,500 years ago.

“The pottery they made looked very different, and some archaeologists have suggested that they were unrelated to each other and came from two separate migration waves,” said Reich. “But the genetic data disprove this.”

“The first farmers, whether from Hungary, Germany or Spain, are genetically almost identical: They are from the same origin,” said Haak.

The team also found that the hunter-gatherers living in Europe didn’t disappear immediately after the farmers moved in. In fact, there was genetic evidence they experienced a resurgence across Europe about 5,000 or 6,000 years ago.

“They stayed around and mixed into the farmer populations,” said Lazaridis.

New kid on the block

The researchers were even more surprised to discover that around 4,500 years ago, a completely new population moved into central Europe from the east.

The evidence centers on a group of ancient humans known as the Corded Ware population in what is now Germany. Archaeologists had noted that the Corded Ware shared certain cultural features with a pastoral population called the Yamnaya, who lived 1,600 miles away in the steppes of what is now Russia. But it wasn’t clear whether the two groups mixed.

The new study found that they did—a lot. Three-quarters of the Corded Ware people’s DNA came from the Yamnaya. 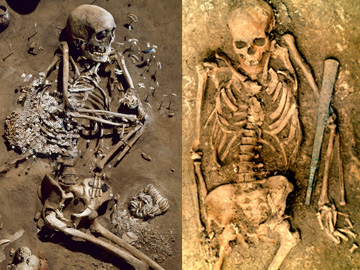 “This suggests a major migration from the steppe into Europe, leading to a major and relatively sudden genetic turnover,” added Haak.

“The sheer magnitude of the migration almost certainly had lasting effects on the languages people spoke,” said Reich, who believes it’s likely the steppe migrants spoke different languages from those already in Europe.

Since modern-day northern Europeans descended in large part from the Corded Ware culture and therefore have more steppe ancestry than first-farmer ancestry, “it seems likely that the steppe migrants contributed at least some of the Indo-European languages to the area,” said Haak.

In earlier studies, several of the same authors had shown that Europeans today are a genetic mixture of three ancestral populations: hunter-gatherers, first farmers and an unknown “Ancient North Eurasian” population, likely from the east, who arrived sometime after the first farmers.

“When we first looked at the new data, it was a Eureka moment,” said Lazaridis. “Starting around 4,500 years ago, every individual in the Corded Ware and subsequent cultures contained this eastern ancestry, but none had it before that time.”

Further, the team showed that measuring whether the DNA of an ancient European contains genetic traces of one, two or all three ancestral groups can help scientists determine how old the remains are.

“Radiocarbon dating confirmed that the genetic techniques were even more accurate than some archaeological assessments,” said Haak.

The tug-of-war isn’t over. Counterarguments are already flying. But it’s clear that both hypotheses will need to incorporate the new steppe migration information, said Lazaridis.

The results are bolstered by a paper from an unrelated team of linguists in the March issue of the journal Language. They reached a similar conclusion that proto-Indo-European split around 6,500 years ago, much later than is predicted by the Anatolian hypothesis.

The Reich group’s study doesn’t reveal the homeland of all Indo-European languages, but they are optimistic that with enough effort, ancient genetic material from a broader geographic range and the use of emerging technologies, answers can be found.

“The priority now is to carry out similar ancient DNA studies to understand how the people of Europe 3,000 to 6,000 years ago were linked with those in Turkey, the Caucasus, Iran and India,” where Indo-European languages are also spoken, said Reich.