For many of them, the act of donning their white coats for the very first time could only be described as nearly indescribable.

“It feels unreal. I mean, I never would have imagined myself here as a kid. Now, we’re about to meet a patient. It’s really a miracle,” said King Fok, an entering Class of 2023 Harvard Medical School student who was born in Hong Kong and raised in Oregon.

“I’m really excited to see what the next four years will be like,” said Mikaela Brock, of Huntsville, Alabama, one of 35 students accepted into this year’s entering class at the Harvard School of Dental Medicine. Brock said she has dreamed of becoming a health care professional since she was in the fourth grade.

“It feels like everything I’ve been working toward for my entire life is coming true,” said medical student Alexis Gutierrez, who said she hails from both Chicago and Phoenix. “I am just so grateful to everyone who’s supported me and got me through.”

This year’s entering Class of 2023, composed of 165 medical and 35 dental students, all of whom received their first white coats this week, is diverse. The medical students hail from seven countries, 33 U.S. states and 74 colleges and universities, according to HMS Faculty Associate Dean for Admissions Robert Mayer, the HMS Stephen B. Kay Family Professor of Medicine at Brigham and Women’s Hospital. Fifty-six percent are female and 44 percent are male. Nearly one-quarter come from populations underrepresented in medicine, 27 percent are Asian and 15 percent self-identify as members of the LGBTQ community. Their median age is 23 years old.

The new dental students, who will spend the first year of their studies with medical students who are enrolled in the Pathways curriculum, come from 19 different states; the class composition is 71 percent female and 29 percent male. Fourteen percent come from populations underrepresented in medicine.

“What we are really in a place to do at HMS is to teach you to be lifelong learners,” said Harvard Medical School Dean George Q. Daley, the Caroline Shields Walker Professor of Medicine, telling the students that the most valuable aspect of the journey they are about to begin is learning how to care for their patients.

Classes for the entering students officially began on Aug. 5 with a welcome from Daley, who recalled his first day at HMS and the excitement, hope and anxiety that he felt. He cautioned the students against comparing themselves to their classmates or to the many illustrious alumni who have gone before them, saying they will all be taught how to acquire the skills and knowledge they will need.

“Know that we do not take this responsibility lightly, and we will do all in our power to nurture and support all of the finest qualities you have brought to our community,” Daley said.

“You will care about people in a way that no other profession does,” said HSDM Dean Bruce Donoff, the Walter C. Guralnick Distinguished Professor of Oral and Maxillofacial Surgery, who reflected on the rapid advances in medicine in recent decades and how much more today’s students must learn.

Donoff also said doctor-patient relationships are threatened today “by economics and profits,” and added that there is much work to do to provide health equity in dentistry, citing the fact that the U.S. Medicare system does not provide dental benefits, a situation, he said, that should be addressed.

“The challenge of change,” he told the students, “is a commitment to action.”

After providing students with an overview of the School’s more than 230-year history, Dean for Medical Education Edward Hundert, the Daniel D. Federman, M.D. Professor in Residence of Global Health and Social Medicine, told the students that HMS values and strives for a culture of collaboration rather than competition, assuring them that they will acquire the tools they need to accomplish their goals at HMS, and adding that they may well learn the most from their classmates and patients.

Community was a theme for the entering students and the word “family” was used often to describe the next four or more years of their lives. Society advisors welcoming the students told them that the Cannon, Castle, Holmes, Peabody and London academic societies to which they now belong should be a place they can feel at home.

“We’re here to look out for you and your well-being,” said Holmes Society Advisory Dean Anthony D’Amico, HMS professor of radiation oncology at Brigham and Women’s.

“Think of yourselves as a new family,” said Faculty Assistant Dean for Student Affairs and Assistant Director of the Office of Recruitment and Multicultural Affairs Sherri-Ann Burnett Bowie, HMS assistant professor of medicine at Massachusetts General Hospital. She acknowledged that family doesn’t necessarily mean everyone is the same or that there is never any conflict, but the hope is that the students will all be inspired by a common goal to help serve humanity.

“Think about how you can all contribute to making us a more just society,” she said.

London Society Advisory Dean Wolfram Goessling, the HMS Robert H. Ebert Associate Professor of Medicine at Mass General, welcomed the 35 students in the Harvard-MIT Program in Health Sciences and Technology and said, “We really speak to those of you who want to become physician-scientists,” adding that the School hopes “to learn from you what the next frontiers will be.”

Jessica Halem, LGBTQ outreach and engagement director in the Program in Medical Education, said that HMS is committed to an inclusive and welcoming environment at HMS. “We’re here to help you navigate the intersection of your personal identities and your career success,” she said.

During the week, the students spent time in a patient clinic at Brigham and Women’s with T. Bernard Kinane, HMS associate professor of pediatrics and chief of the Pediatric Pulmonary Unit at Mass General, and a young patient who has congenital central hypoventilation syndrome, or CCHS, a rare disorder of the autonomic nervous system, which controls regulation of breathing, heartbeat, blood pressure and more.

A full day was devoted to community engagement and health care in Boston, with the students traveling to nearly 20 different neighborhoods to visit clinics affiliated with the medical school to learn about the social determinants of health. At a formal White Coat ceremony on the HMS Quad attended by family, friends, faculty and staff, the students introduced themselves, said where they were from and thanked those who had helped them realize their dreams of becoming physicians. They were reminded by Hundert that although they had officially received their white coats, "you're going to have to earn your coat every day of your life."

Nicolas Freeman, an entering MD student from Ashburn, Virginia, likely spoke for many when they reflected on what it meant to finally wear their white coat.

“It feels amazing, in a word. Like this journey … I’ve spent so long to get here, and it is finally about to start,” Freeman said. 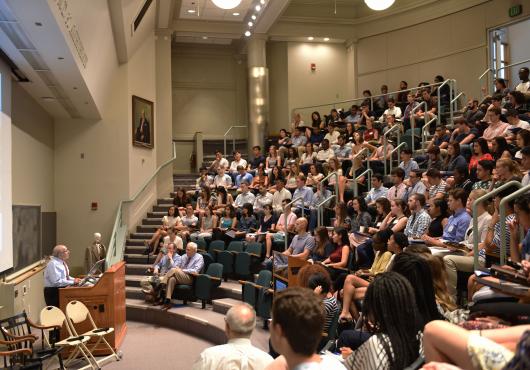 The HMS/HSDM Class of 2022 received their white coats and were introduced to each other and faculty... 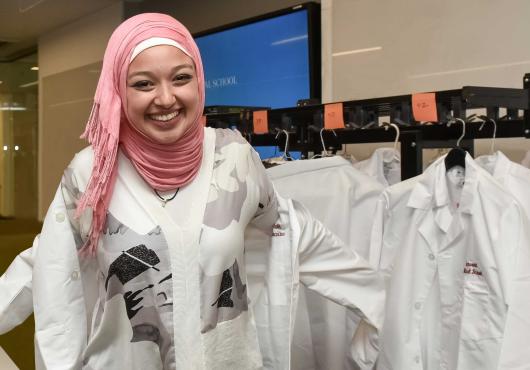 For the incoming HMS Class of 2022, new white coats signify the beginning of a lifelong journey. 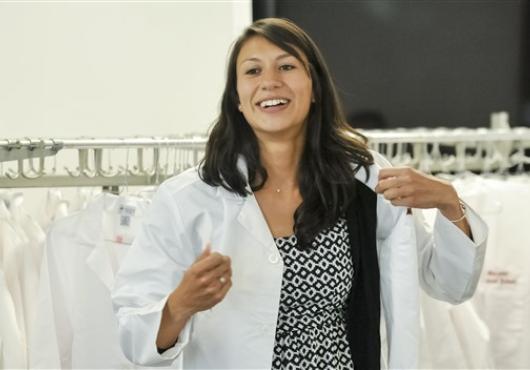 The HMS/HSDM Class of 2021 enjoyed a full week of classes and celebrations during their orientation...